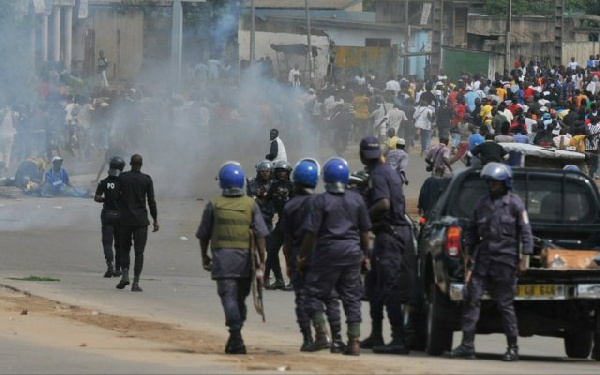 A clash between the police stationed at the Newmont Mining Company and the youths of Kenyasi in the Asutifi North District of  Ahafo Region has claimed the life of one and left at least four injured.

The youth disclosed that the deceased is innocent and he was shot on his tricycle commonly known as “pragia” whiles conveying his own goods for sale.

According to the youths of the community, the unavailability of good-paying jobs has compelled them to hustle on various lands to gather rocks and sell to others to gain little income.

The youth further expressed their displeasure as to how the police often arrest and harass them on various sites. They added that “the community including the lands belong to them and their relatives hence, the police do not have the right to prevent them from plying on the lands”.

They attributed the actions of the Police to have been instigated by Newmont Mining Company.

Some of the aggrieved youths voiced that” they want justice on behalf of their dear friend who was shot dead and the four who have been critically injured by the police and are in the hospital for treatment.”

“We will never leave this place until something is done concerning the death of our brother. If the police want us to stop gathering the rocks then, they should also evacuate from our town”, they averred in an interview monitored by The Ghana Report on Joy News.

Meanwhile, the District and the Divisional Police Commanders of the District are intervening to call to order the youths who are trying to weigh on the police located nearby the Newmont Mining Company.