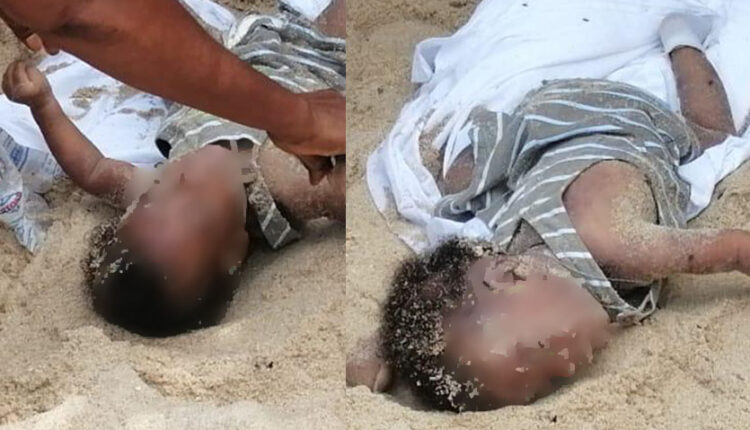 Residents of Gomoa Nyanyano in the Central Region were thrown into a state of shock when the body of a 10-month-old baby was exhumed at the seashore.

It is unclear when the body of the baby girl was buried but it was retrieved on Thursday evening at the Gomoa East District of the region.

She was wrapped in white clothes in a black polythene bag with cotton wool stuffed in her mouth, nose and ears.

An eyewitness said the body of the baby girl was discovered in an awkward position by children who playing at the seashore.

The 10-month-old girl victim appeared to have been buried upside down in the sand.

The children alerted the elders in the community who proceeded to the scene.

The body of the baby has been conveyed by the Gomoa Nyanyano District Police command to the Winneba Trauma and Specialist Hospital morgue for preservation and autopsy.

In September 2020, a newborn baby girl was rescued after she was buried alive in a bush at Ajumako Ebowkurase, a farming community in the Central Region.

The baby was discovered by farmers who heard her crying in the bush.

After her rescue from the burial place, she was rushed to a health facility.

A similar incident happened at Krobo-Akye in the Central region in November 2019.

A 10-month-old baby girl was allegedly buried by her mother in a bush in the area.

She was rescued after her cries caught the attention of residents.

The baby girl was found in a makeshift grave in the bush after residents traced the sound of her cries.

She was sent to the Senya Breku Health Centre where the Medical Officer, Dr Victor Saidu Issifu said the baby was in critical condition.

He explained that she had a bacterial infection, especially in her private part due to the number of hours spend underground.

On July 14, 2019, in the Eastern Region, an 18-year-old mother, Jennifer Badu, buried her newborn baby boy alive minutes after giving birth to him in a bush.

The incident reportedly occurred at Wodukum, a farming village in the Suhum Municipality.

Confirming the incident, the Regional Police PRO, DSP Ebenezer Tetteh said a native in the area who spotted the incident in the bush rushed to the Police and reported the matter.

Police rushed to the scene and found a lifeless body of a day old baby boy lying in a small hole in a supine position with his placenta lying close to the body.

He said the lifeless body of the child was photographed and conveyed to Suhum Government Hospital morgue awaiting an autopsy.

The teenage mother was arrested to assist with the investigation.