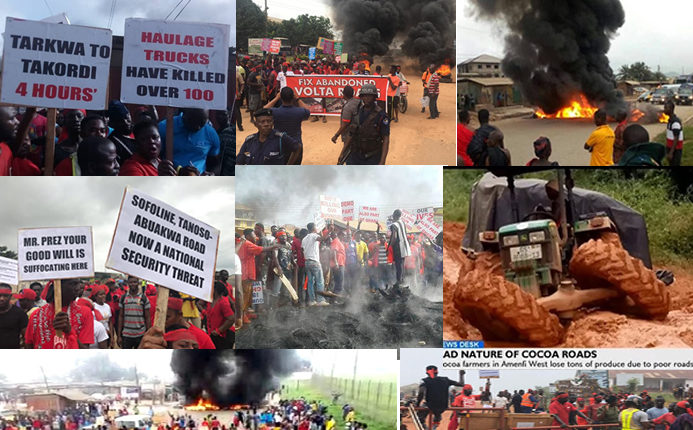 The Akufo-Addo administration has announced that 2020 is a year of roads. It is because it may have gotten feedback that 2019 has been a year of rage over roads.

With 11 months into 2019, the administration has been hit with at least 19 reported demonstrations over terrible roads, theGhanaReport has done a news count.

October was the angriest month, recording the highest number of protests.

Western, Central and Ashanti region, the stronghold of the ruling government, all recorded three demonstrations apiece.

There were two demonstrations in the Volta Region and one each in the Upper East, Eastern and Bono regions.

The frustrations gathered momentum in the last quarter as more communities took to the streets, recording at least 15 protests from September to November.

The Ghana Report goes on a memory lane to recap the demonstrations mostly crowned with the burning of lorry tyres and the blocking of roads.

October 21, 2019:  Residents of Nsakina and Odumase in the Ga West Municipality and their counterparts in Manhyia in the Ashanti Region vent their frustrations in a simultaneous demonstration in the two regions.

November 18, 2019: Residents of Washington, New York and Atadeka, all suburbs of Ashaiman in the Greater Accra region, protested the terrible conditions of their roads by burning tyres and blocking access routes. 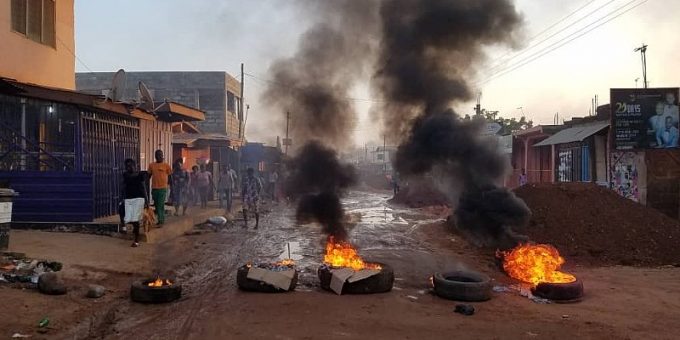 November 8, 2019: Scores of cocoa farmers and traditional leaders at Samreboi and its adjoining communities in the Amenfi West District of the Western Region poured onto the streets to demonstrate against poor roads.

November 6, 2019: Residents of Bolgatanga in the Upper East Region took to the streets to vent their frustration about the deplorable state of roads in the region. After demonstrating through the principal street of the regional capital over what they described as the neglect of the region, they presented a petition to the Regional Minister, Paulina Abayage.

November 4, 2019:  Residents and drivers who use the Agona Swedru-Winneba road demonstrated and blocked access roads.

October 30, 2019:  Agitated residents of Nkroful, the home town of Ghana’s first President, Dr Kwame Nkrumah, protested the deplorable state of the Nkroful-Essiama road. The residents during their protest threatened to boycott any national activity if the government does not heed to their request.

October 23, 2019: Residents in five communities in the Ga West Municipality in Accra blocked the main Afuaman-Manhean-Ablekuma road, disrupting traffic flow and triggering a gridlock on the main road linking Ablekuma and Manhean. 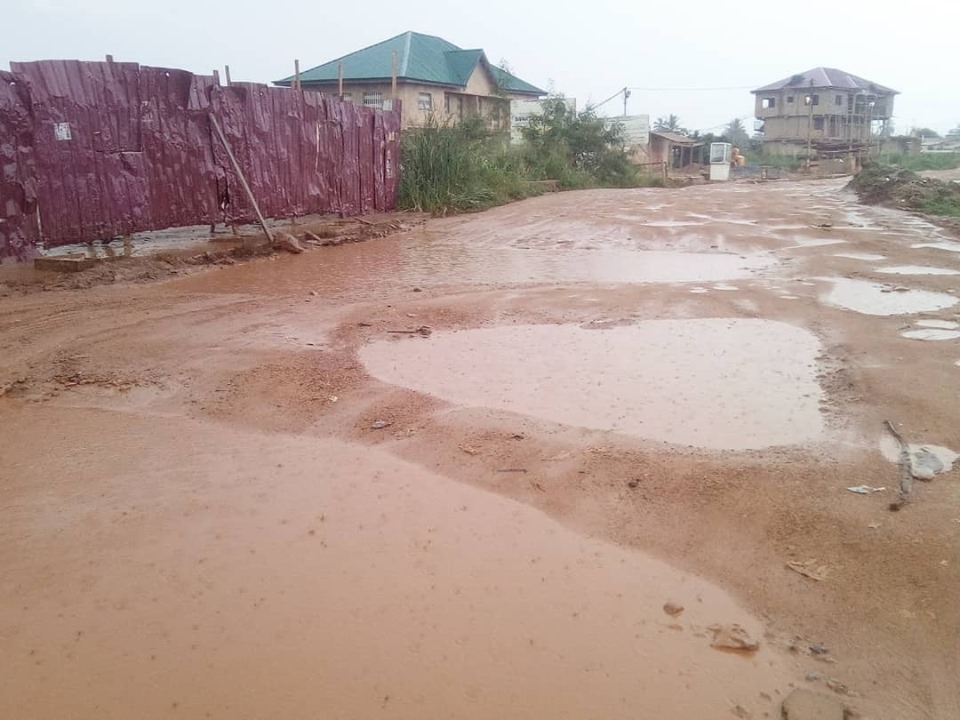 October 21, 2019: Not even early morning rains at about 5:50 am could stop residents of Nsakina and Odumase in the Ga West Municipality from demonstrating.

October 8, 2019: Residents of Klo Agogo in the Yilo Krobo Municipality of the Eastern Region torn down some market sheds in their moment of anger over poor roads there.

September 26, 2019: With delays in the construction of the Sofoline Interchange project in the Ashanti region, residents of Abuakwa in the Atwima Nwabiagya Municipality vented over the perceived abandonment. They warned of naked march to the Jubilee House if the Tanoso-Abuakwa stretch is not completed as soon as possible.

September 30, 2019: The demonstrators in Ho in the Volta region protested and gave Dr Archibold Yao Letsa, the Regional Minister, and the government a one-month ultimatum to repair the roads.

September 26, 2019: Hundreds of residents of Abuakwa and Tanoso in the Ashanti Region demonstrated over poor roads in the area. They blamed heavy traffic congestion in the area on the poor road network.

September 24, 2019: What began as a peaceful demonstration in Kpeve in the South Dayi District over deplorable roads in the Volta Region turned nasty when the residents burnt vehicle tyres on parts of the eastern corridor road that runs through the town.

August 13, 2019:  Angry drivers in Pokuase Mayera in the Ga North Municipality of the Greater Accra Region were fed up with the bad state of the road untouched by construction equipment in the past decade. The protestors blocked the road at four different spots. 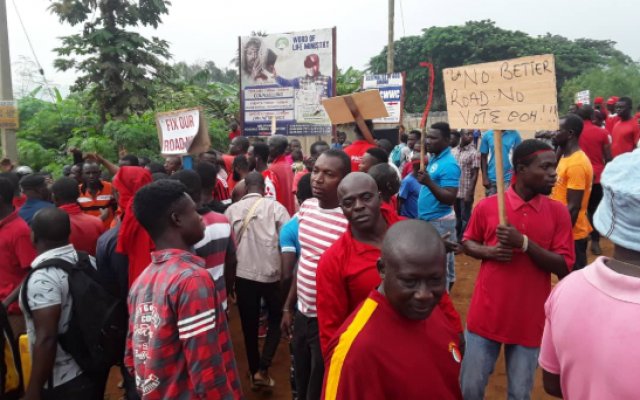 May 17, 2019:  Some 76 protesters blocked a section of the Sunyani-Techiman highway to protest the neglect of dual carriageway road at New Dormaa in Sunyani in the Bono Region. They were arrested for violating the Public Order Act.

They blocked the road in front of the Brong Ahafo Regional Hospital with logs, concrete blocks and burnt tyres at dawn to prevent motorists from Techiman, Wenchi, Kintampo from entering the Central Business District and vice versa.

The demonstration turned violent when the demonstrators arrested a police officer, who was on his way to work and locked him in a container.

April 4, 2019:  Youth of Kasoa Nyanyano in Gomoa East District in the Central Region demonstrated over the poor roads in the area, giving government April 8, 2019, to fix the menace. The 5-hour demonstration which started at Millennium City Junction in Kasoa ended up with the angry youth burning car tyres to register their displeasure.

March 4, 2019: Residents of Dawhenya in the Greater Accra Region resorted to civil disobedience to demand good road network in their community. Scores of the residents on the Dawhenya-Afienya link burnt car tyres and blocked the roads.

Over the last three years, capital investment in the road sector has been meagre with several road projects awarded by the Mahama administration put under audit because of allegations of overpricing. The government is yet to release the audit report. 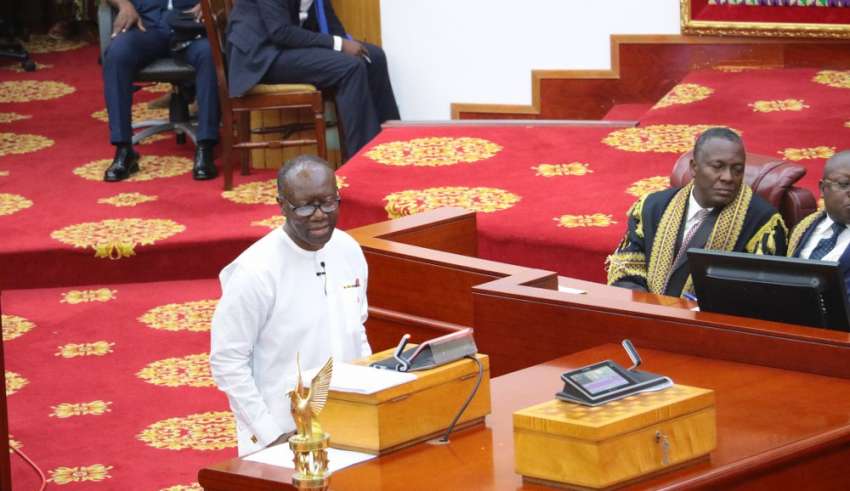 In the 2020 budget, the Finance Ministry has Parliamentary approval to spend $646 million from China’s Sinohydro deal on the following projects:

That aside, all 16 regions are to benefit from the construction of selected critical roads. The omission of the Volta Region from the list created a political storm that was tamed by Senior Minister, Yaw Osafo-Marfo’s, admission that the omission was an error. The list was subsequently updated by the Minister of Finance, Ken Ofori Atta before Parliament.