The Electoral Commission (EC) of Ghana said it has displayed the names of some 21, 887 people who have been banned from participating in the 2020 elections.

The affected persons have been barred for violating electoral laws during the registration exercise.

The Multiples list contains persons who registered more than once while the Exceptions list has persons whose applications were challenged at the registration centres by members of the public.

The Multiples list contains the names of 7,890 unique individuals who were involved in 15, 850 multiple registrations.

The Exception list contains the rest of the individuals.

This was disclosed by the Chairperson of the EC, Mrs Jean Mensa, at a press conference on Monday, November 29.

She said there was no law that mandates publication of the names but the EC did so to ensure transparency.

She emphasized that contrary to claims by some critics “no human generated the multiples list but the biometric and registration software identified unique fingerprints that appeared more than once and isolated them”.

A total of 443 persons at Zabzugu in the Northern Region who challenged their exclusion were granted an appeal by a High Court and had their voter ID cards printed for them.

Some 52 persons also at Effutu in the Central Region won their appeal and got their ID Cards back.

Meanwhile, some 542 persons who registered for the new voter roll have their names missing after compilation of the final document to be used for the 2020 elections. 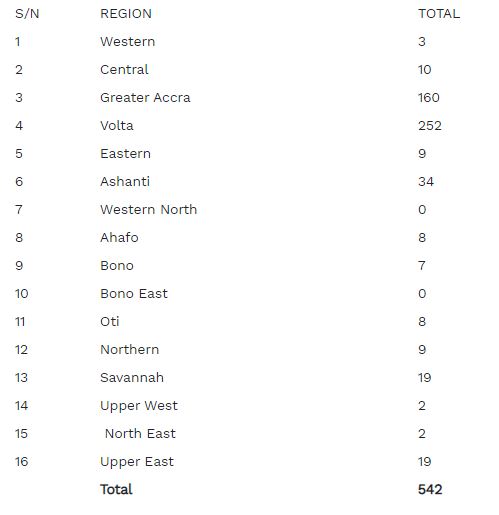 However, they can still vote on December 7, 2020, Mrs Mensa assured.

The election management body would publish the names of the people affected according to the polling station, district and region by Monday, November 23, 2020.
The affected persons can proceed to have the situation corrected by visiting the offices of the EC.

However, there is no cause for alarm as the EC assures that they would not be disenfranchised.

The EC was able to identify the names by conducting a “reconciliation between the final provisional register and the End of Day Reports”.

She said the electoral system ensured that there was a print out of persons who registered from every biometric machine daily during the registration exercise.

So, for the 38 days registration period, every polling station has 38 End of Day Reports “and these reports were made available to the political parties” for accountability.

Additionally, 238 persons were placed in wrong polling stations but the EC says it has made efforts to correct the problem.

She says some 830 persons have been placed on the Missing Names list.

The final voter’s register has been placed on the EC website, registered.ec.gov.gh.

It does not include biometric data following the controversy over data protection after the entire register was ‘leaked’ on social media.

Registered voters can check to confirm their names in the register by dialling *711*2020#. You then enter voter ID number and polling station code found on the voter’s ID card.