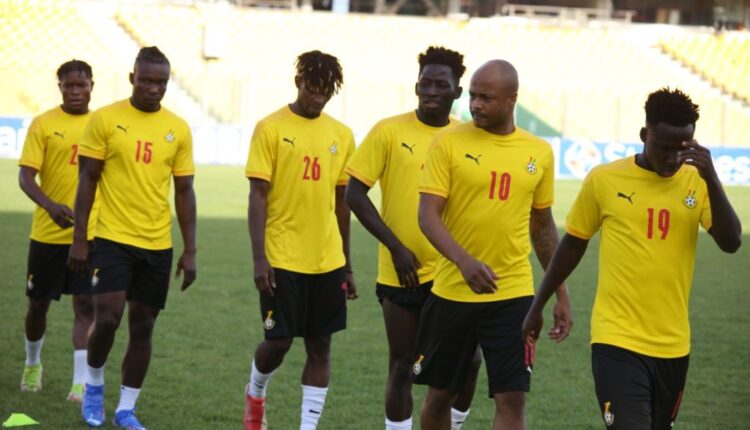 The Black Stars are expected to leave Accra today (November 9) for South Africa ahead of the 2022 FIFA World Cup qualifier against Ethiopia.

They will fly via a chartered flight for their matchday 5 fixture to be hosted by Ethiopia at the Orlando Stadium in Johannesburg on Thursday, 11 November 2021, at 15:00hrs GMT.

The Black Stars opened camp on Monday and held their first training session at the Accra Sports Stadium on Monday evening with 15 players while others are expected to join today before the team depart.

On Monday evening, the Stars ended their training session with a friendly game against Division One League side, Golden Kick.

Coach Milovan Rajevac’s side won the game by 5 goals to one with Richmond Boakye Yiadom, Jordan Ayew, Caleb Ekuban and Abdul Fatawu Issahaku being the goal scorers.

Meanwhile, the 28 man squad has been hit with injuries as the Serbian coach is considering giving call-ups to new players.

Already, Montari Kamaheni of Ashdod FC has been invited to replace France-based left-back Gideon Mensah, who suffered bruises on his left ankle during Saturday’s French Ligue 1 clash against PSG.

There has also been a report of a replacement for deputy captain Thomas Partey who is also injured and missed out on Arsenal’s league game with Watford over the weekend.

Sources say the name of Bernard Mensah has been mentioned and he could be invited to replace the injured midfielder.

Meanwhile, the Ghanaian FA is in talks with the medical team of Arsenal hoping to have the player for at least the clash against South Africa.

The team will return to Ghana after playing the Walia Ibex of Ethiopia and host the group leaders, South Africa, in the final group match.