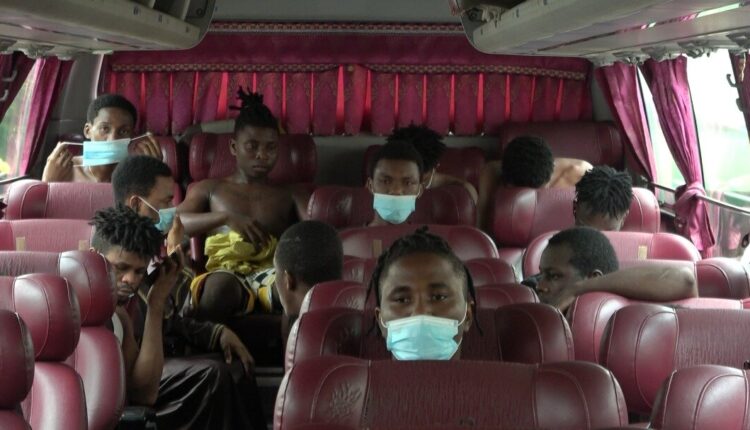 Some 27 Nigerians have been repatriated for allegedly engaging in cybercrime in Ghana.

The repatriated Nigerians whose ages range between 16 and 26, were earlier arrested by the Ghana Immigration Service at Apiedu in the Ashanti Region on Friday, October 15.

The Ashanti Regional Immigration Command said it received intelligence that the Nigerian nationals had entered the country illegally about a month ago and had been engaging in fraudulent activities.

A bus was subsequently organised to convey them from Kumasi to the Aflao border for the officers at the border to ensure they arrive home safely.

The Ashanti Regional Operations Department of GIS, Superintendent Mohammed Abdul Manan said the “Nigerians, all males were engaging in suspected cybercrime at Apiedu close to KNUST. Even in the statements their leader admitted they were involved in illegal operations”.

In light of the happenings, the service issued a stern warning to all illegal immigrants to desist from such practice. It further assured the public of its willingness to apprehend offenders and rid the country of crime.

It also called on the public to support it by giving out information that will lead to the arrest of other persons who have entered the country illegally and are engaging in fraudulent activities.

On April 27, 2021, a total of 507 illegal immigrants were arrested in the Bolgatanga Municipality in the Upper East Region.

They were made up of 494 Nigerians, including six females and 13 Burkinabes.

On September 10, 2021, two persons were apprehended by the immigration patrol team at Bitchabe, a border community near Tatale in the Northern Region.

The two male suspects, whose names are being withheld, were said to be 27 and 28 years, respectively.

On September 13, 2021, some 38 Burkinabes were apprehended by the immigration patrol team for entering Ghana through unapproved routes.

Although there has been some ease in the movement since the beginning of January 2021, Ghana’s borders and many indoor entertainment facilities remain closed after 17 months, with no end in sight.