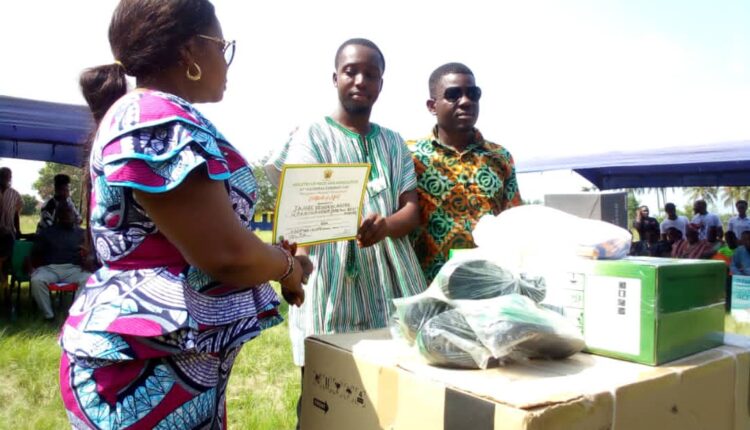 Mr James Aryee, a 28-year-old farmer, has emerged as the Overall Best Farmer in the Agortime-Ziofe District of the Volta Region.

James, a senior high school graduate, has cultivated corn, sweet potatoes, garden eggs, groundnuts and other crops on 100 acres of land and another 100 acres of mango is currently under cultivation.

The young man hails from Agbozume in the Ketu South Municipality but moved to Kpaminakorpe in the Agortime Ziope District in 2013 to help cultivate the 200 acres of land his family had acquired for a mango plantation.

He received a certificate, a chest freezer, and some farm implements at the District Farmers Day celebration held at the Beh community.

In an interview with the Ghana News Agency, Mr Aryee encouraged the youth to take up agriculture and aspire to be successful despite the challenges.

He said he had 10 workers on his farm and expressed appreciation to the agriculture extension officers for their support towards the success of his enterprise.

He appealed to stakeholders to help address the financial challenges facing farmers in the area, which included access to farm inputs, labour and harvesting equipment.

Godwin Akongo from Afegame won the Best Livestock prize, while Nicodemus Galley from the Wudzedeke community emerged as the Best Crop Farmer.

Ms Emilia Emefa Adzimah, the District Chief Executive (DCE), commended the youth for their contribution to the agro sector and said it helped to hold the district as a major farming enclave while advising them to consider the government’s flagship programmes in agriculture.

She commended the farmers for sustaining the agro-economy despite the challenging times and asked them to engage in environmentally friendly activities.

Mr Fransis Kpegla, the District Director of Agriculture, said through the promotion of standard and improved practices, the district maintained its dominance in the cultivation of tomatoes and reiterated the need to consider the area for a tomato processing industry.

He appealed to the farmers to form groups and associations to receive critical external support.

The District Office would demonstrate the cultivation of rice as the land had proven to support the staple, he said and appealed for support and funds from the Assembly.

Nene Nuer Keteku IV, Konor (Paramount Chief) of Agortime Kpetoe, who chaired the celebration, urged the youth to become ambassadors of agriculture and work hard to ensure the sector was thoroughly developed.

The best farmer for the Volta Region for 2022 also hails from the district and is a budding food processor who had attracted the support of the German International Corporation.

This year’s theme was: “Accelerating Agricultural Development through Value Addition.”