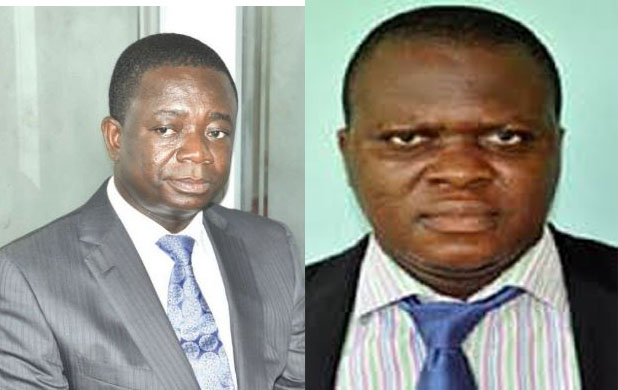 Attempts by the suppliers of US$3.15 million fertilizer contract to the Ghana Cocoa Board to run from their underhand dealings with Dr. Alfred Arthur, a Soil Scientist at the Soil Science Division of the Cocoa Research Institute of Ghana (CRIG) at Tafo in the Eastern Region and a key witness for the state in the criminal trial of Dr. Stephen Kwabena Opuni, has backfired.

The fertilizers, called Cocoa Nti Granular Fertilizer supplied by Agriculture Manufacturing Group Limited, a sister company of Enepa Venture owned by one Ernest Akwasi Appiah, did not go through the required testing procedure at CRIG, prior to its purchase by COCOBOD, under sole sourcing arrangement in May this year by the Joseph Boahen Aidoo management.

Indeed, there are two controversial scientific reports before the Accra High Court trial with separates dates, signatures and contents on Cocoa Nti Granular Fertilizer, suggesting the suppliers of the agro product went through the back door to get the approval, which eventually secured them the US$3.150 million fertilizer supply contract from COCOBOD, this year.

The Cocoa Nti Granular Fertilizer contract and other issues related to its approval and procurement have become part of a credibility test for Dr. Arthur, who is the second prosecution witness in the trial of Dr. Opuni, former CEO of the COCOBOD and businessman, Alhaji Seidu Agongo.

Dr. Opuni and Mr. Agongo are facing 27 charges—including defrauding by false pretences, wilfully causing financial loss to the state, money laundering, corruption by a public officer and acting in contravention of the Public Procurement Act. They have pleaded not guilty and are on a GH¢300,000.00 each self-recognisance bail by the Court.

Additionally, The Herald’s investigations into the controversial procurement, also disclosed that the Morocco-based fertilizer manufacturing company; OCP Group, cannot also distance itself from Agriculture Manufacturing Group Limited and Enepa Venture, as countless private email correspondence between officials of the three companies and the soil scientist Dr. Arthur, showed testing procedures at CRIG were sidestepped in getting approval for Cocoa Nti Granular Fertilizer.

These several correspondences culminated into a fully-sponsored private trip to Morocco by the soil scientist, the writing of a scientific report on Cocoa Nti Granular Fertilizer for Agriculture Manufacturing Group Limited and its sister company of Enepa Venture by Dr. Arthur, leading to his investigation and suspension from the CRIG in 2016 for forgery.

Interestingly, the same Cocoa Nti Granular Fertilizer was handed over to Dr. Arthur when he was recalled, and quickly approved the product in a second scientific report dated 2018, allowing the COCOBOD management to now award the US$3.150 million fertilizer supply contract to Agriculture Manufacturing Group Limited owned by Ernest Akwasi Appiah and his wife Belinda Appiah, same year.

The second testing of the Cocoa Nti Granular Fertilizer and the award of the contract, took place in record time.

Amazingly, one of the email correspondences dated April 28, 2013 was to Dr. Yaw Adu Ampomah, Deputy Chief Executive Officer of COCOBOD in-charge of Quality Control and Agronomy, was written by El Kanit Abdelmonim of OCP Group of Morocco and copied Dr. Arthur.

Reports are that Dr. Yaw Adu Ampomah has also had some private dealing with Enepa Ventures in the past.

The email informed Dr. Adu Ampomah of Dr. Arthur’s impending trip to Agadir – Morocco for a conference organized OCP Group from May 6 to 10 where “many topics on phosphate fertilizers, their use, technology and research development of new fertilizers and agronomic applications” were discussed.

Another email communication which further ties the three companies; OCP Group to also distance itself from Agriculture Manufacturing Group Limited and Enepa Venture to Dr. Arthur and the fact he was dealing with the companies out the laid down procedures at COCOBOD and CRIG is dated 20th February 2013 and sent him by one Henry Otoo-Mensah and copied Ernest Akwasi Appiah.

Otoo-Mensah who described himself as consultant, wrote that “please note that the sample as you recommended will be sent to you in due course (please, give me more feedback on the quantities you will need for the trial). As we do not currently have a blending unit in place we are relying on our manufacturers to produce the initial quantities as we arrange with AFAP to procure a computerized blending unit from the Netherlanders”, adding “we are also in the process of arranging with OCP, company based in Morocco to supply Enepa with the raw materials by 19/04/13 at very competitive prices to enable us blend at cheaper cost”.

Last month when the issue of US$3.150 million fertilizer supply contract to Agriculture Manufacturing Group Limited popped up in court and reported by the media, Enepa Ventures Limited strong denied its links to OCP Morocco.

It also debunked reports COCOBOD under the management of its current Chief Executive, Joseph Boahen Aidoo purchased some 100,000 bags of an untested fertilizer called “Cocoa Nti” worth US$3.5 million using a forged scientific report in Morocco.

The company, in a press release, has stated emphatically that it has never supported any Scientist or Officer CRIG to Mocorro, neither is Cocoa Nti, a fertilizer specially made for Cocoa in Ghana manufactured by OCP Limited of Morocco.

“We wish to state emphatically that Cocoa Nti, a fertilizer that has been specially formulated for cocoa in Ghana, went through the rigorous test processes of the Cocoa Research Institute of Ghana (CRIG) prior to its certificate by CRIG” the statement read.

According to the release, Cocoa Nti was tested and all legal processes and administrative formalities in COCOBOD was observed for the purpose of purchasing and distribution of products to cocoa farmers.

The company believes the media report was in a way tarnishing their high won reputation earned over the years as a leading fertilizer and agro-chemical distributor in the country.

Enepa Ventures Limited is pleading with the general public and its esteemed customers especially, the hardworking cocoa farmers across the country to ignore the publication and treat it with all contempt.

Adding that, the company will continue to work with farmers and all stakeholders in the Agric Sector to support farmers with fertilizers and agro-chemicals of the highest grade and standard to boost the production of food and agricultural products in Ghana.

Enepa Ventures Limited is assuring all stakeholders that the company will continue to be guided by their core values of integrity, hard work, Innovation, Service to God and the Country at large.

But at the Accra High Court presided over by Justice Clemence Honyenugah, an Appeal Court Judge, who sitting as an additional High Court Judge, lawyer for Agongo, Benson Nutsukpui asked about the relationship between Enepa Venture, OCP Group, and AMG pf which the witness said between AMG and Enepa Ventures, one was a subsidiary of the other, and however, there was no link at all between Enepa, OCP Group and AMG.

Mr Nutsukpi pointed out to the witness “You told the Committee that OCP is a French Company based in Morocco and are major distributors of Fertilizer” but Dr Arthur said he does not remember telling the Committee that.

Mr Nutsukpui further alleged further that the witness said that Enepa Ventures were local Representatives of OCP but the witness disagreed with this assertion.

The Counsel asked the witness that “You told the Committee that you met the OCP officials when you coincidentally attended a conference in Morocco, where they were also present” but the witness disagreed.

Dr Arthur, who is the second prosecution witness explained that two officials from the OCP Group were in Ghana and visited the Soil Research Institute in Kumasi to find out, whether they could conduct a test on Maize and Rice.

Asked, whether it was true that he (Dr Arthur) got the Material Safety Data Sheet of the products to be tested before the first meeting with the OCP officials in Ghana but the witness told the Court that there was no link between the OCP officials and the Enepa Ventures wanting to test fertilizer products on Cocoa.

Counsel alleged that the witness sealed the OCP deal way back before the arrival of the officials but the witness said that was not the case but added that “as I explained earlier, the invitation came to the scientists first before it was directed at management to either approve or not and in this case it was approved”.

Who sitting as an additional High Court Judge on Monday, said according to section 74 of the Evidence Act, the Counsel for SeiduAgongo, the Chief Executive Officer of Agricult Ghana Limited has no obligation to show documents to the witness before questioning him on it.

Mrs. Yvonne Attakorah Obuobisa, the Director of Public Prosecutions, at point objected to the line of questioning from Mr. Nutsukpui, saying he was reading word for word from a report not in evidence.

She said once the document has not been tendered as evidence, the Counsel could not quote from it as if it was before the Court. But Justice Honyenugah, dismissed the objection by the prosecution for the documents to be shown to the witness before questioning him on it.

The judge said Dr Alfred Arthur, a scientist at the Soil Science Division of the Cocoa Research Institute of Ghana (CRIG); in his evidence in chief to the court said he appeared before a Committee initiated by COCOBOD, hence the Counsel for MrAgongo wanted to test his knowledge about things that took place before the Committee.

Mr Nutsukpui said “I have not quoted any part of the report which the prosecution provided us”.

He said the Defence believed that the Court has to assess the credibility of the witness; hence “l am giving the witness the opportunity to answer these questions since he said he appeared before the Committee”.

Mr Nutsukpui said it would be unfair for the defence to address the Court on the credibility of the witness without giving him the opportunity to defend himself.

“I was just suggesting the questions to him, in any case we are not obliged to show him the documents before cross-examination,” he added.

MrNutsukpui in further cross-examination of Dr Arthur pointed out to him that a letter with its invoice attachment from CRIG in 2014 described the product as liquid foliar fertilizer but the witness said “as I stated earlier I have not sighted any of such documents”.

He said what CRIG tested between July to December 2013 was a powdery lithovit foliar fertilizer from Germany and a report was submitted to the then CEO of COCOBOD, Dr. Opuni on January 20th, 2014 and the report was approved by management of COCOBOD with a covering letter signed by DrOpuni on January 21, 2014.

“The name of the product was in bold caps as LITHOVIT FOLLAR POWDERY FERTILIZER and a certificate issued by Dr F. M. Amoah, the then Executive Director of CRIG on January 22, 2014,” he added.

The Court presided over by Justice Honyenugah adjourned the case to Monday, December 17, for the continuation of the hearing.