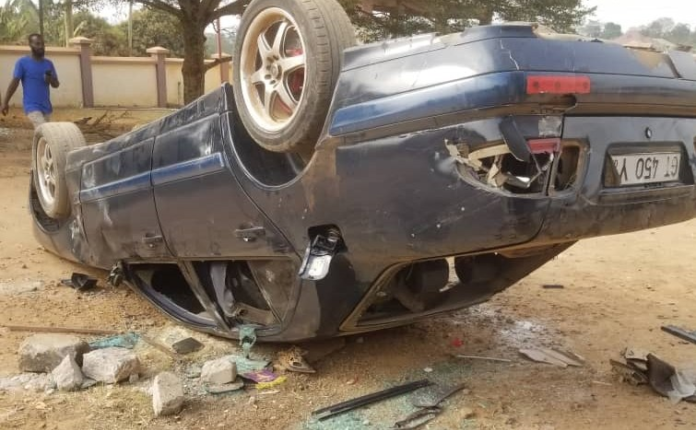 Some 39 Krobea Asante Technical and Vocational School students at Effiduase Asokore in the Sekeyere East District of the Ashanti Region have been remanded in police custody.

The students who allegedly participated in riots that led to the destruction of the school and private property were hauled before the Asokore Mampong District Court on Tuesday.

It will be recalled that angry-looking Krobea Asante Technical and Vocational School students went on a rampage on Sunday as they destroyed everything in sight, including vehicles.

The students were said to have gone berserk following their performance in an examination controlled by an outside body.

Initially, it was announced that 40 suspects were nabbed in connection with the riots, but the number was cut down to 39 after police interrogations.

Lawyers of the accused persons pleaded with the court to grant their clients bail, arguing that they would be available to the investigators anytime the need arose.

But the prosecution team strongly objected to the pleas of the defence lawyers.

They urged the court to remand the suspects as investigations are still ongoing.

The court sided with the prosecution and remanded the accused persons.

The suspects, including 27 juveniles and 12 young first offenders, are to reappear on February 2, 2023.

They have been charged with conspiracy to commit a crime, unlawful entry, causing unlawful damage, and stealing

Meanwhile, the Ashanti Regional Coordinating Council (REGSEC) and the Ministry of Education have announced a five-member committee to probe the riots in the school.

The committee is chaired by a Court of Appeal judge, Justice Samuel Obeng Diawuo, and they have two weeks to complete their work and come out with their recommendations.

Other members of the fact-finding committee included Rt. Rev. Nuh Ben Abubekr, a retired Methodist Bishop and David Adu-Osei, a retired Regional Commander of the NIB.

The Chief Director of the Ashanti Regional Co-ordinating Council would serve as committee secretary but without voting rights, a press release has disclosed.