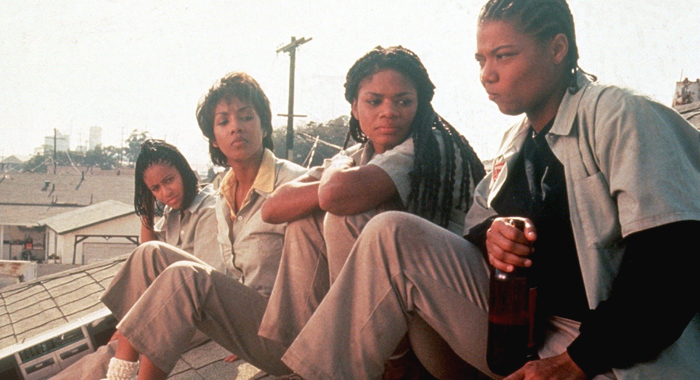 January 17 marks 30 years of being shaken by a quartet of Harlem high school teens, made up of Q (Omar Epps), Steel (Jermaine Hopkins), Raheem (Khalil Kain), and, of course, the unforgettable and unhinged Bishop (Tupac Shakur) in the classic hood thriller Juice.

The cast was brilliant and convincing as four young Black men were forced to navigate police harassment, gangs, and straight-up chaos in order to survive.

This was a movie of firsts for a couple of reasons. It saw Ernest R. Dickerson’s switch from cinematographer to writer/director. Having collaborated with Spike Lee on iconic projects like 1989’s Do The Right Thing and 1992’s Malcolm X, it was time for Dickerson to get behind his own camera, and we are thankful he did.

Juice also sparked Shakur’s first true foray into professional acting, just as his legendary music career was taking off. Tupac earned praise from critics for this gripping feature debut, a performance that still has the internet in a chokehold (we’ve all seen the memes of him and his hybrid box/high-top fade).

This should come as no surprise, given that Shakur had studied at Baltimore School for the Arts and was no stranger to the craft, but he wasn’t the only MC to make the leap from the radio waves to the silver screen. In celebration of Juice and Shakur’s breakthrough feature debut, we think it’s only appropriate to highlight our favorite ’90s movies showcasing the undeniable talents of rappers turned actors.

Kid ‘n Play jump through hoops to throw the party of the year – who doesn’t love this movie? The vibrancy and mischief of it all made this an instant comedy classic and, as far as dance battles go, nothing touches the duo’s face-off with leading ladies Sydney (Tisha Campbell) and Sharane (A.J. Johnson), whose choreography inspired a generation.

It’s hard to imagine anyone else playing these parts, but this was originally written for a different rap duo: DJ Jazzy Jeff and The Fresh Prince (aka Will Smith, who would of course go on to become one of Hollywood’s biggest names). While the sequels didn’t receive the same critical acclaim, it’s worth noting that House Party 2 (1991) and House Party 3 (1994) featured appearances by TLC, Immature, and the powerhouse that is Queen Latifah (who we’ll get to soon).

While Ice Cube’s filmography consists mostly of comedies, his acting career began as a gang banger with heart in John Singleton’s directorial debut Boyz In The Hood,  an important coming-of-age drama that helped create a shift in Hollywood, depicting South Central LA with depth and compassion. Nia Long, Morris Chestnut, and Cuba Gooding Jr. were newcomers at the time and all were praised for their performances.

After enjoying success both at the box office and with critics, Singleton had his next project lined up: Poetic Justice (1993). Ice Cube was originally set to star opposite Janet Jackson in that film, but after reading the script, he declined the role of Lucky that eventually went to Tupac. Cube did, however, reunite with Singleton for 1995’s Higher Learning, which co-starred fellow MC Busta Rhymes, and he would go on to showcase a more lighthearted side of the hood in the iconic comedy Friday later the same year.

Speaking as a former Catholic high school student, everybody and their mama in my hometown thought they were Lauryn Hill singing “His Eye Is On The Sparrow.” Whoopi Goldberg is amazing as the Vegas showgirl/pretend-nun Sister Mary Clarence, while Hill shines as she conflicted music student, Rita, who wants nothing more than to share her beautiful voice but can’t because her mother forbids it.

Sister Act 2 garnered less favorable reviews than the original and actually tanked at the box office, but it later became a cult classic hit on television (we even covered it on our podcast). Hill was already part of The Fugees when Sister Act 2 was filmed, and the group had enjoyed some success with their 1992 debut album “Blunted on Reality,” but it was 1995’s “The Score” that made the whole world stand up and take notice of L-Boogie. Ryan Toby, who plays Wesley Glen “Ahmal” James in this film, would also go on to have chart success with his group City High.

Queen Latifah, Vivica A. Fox, Jada Pinkett Smith, and Kimberly Elise are mesmerizing in this tragic, high-octane story of four friends who rob banks and fight to get ahead of the awful cards they’ve been dealt in life. All four women radiate rawness and beauty in their performances, full of grit and heart.

Having appeared in both Juice and House Party 2, then further establishing herself as an actor in the hit sitcom Living Single (which, yes, was Friends before Friends existed), Latifah really shifted gears when she signed up to be part of this action-packed blockbuster. It’s impressive to see her go from the polished and professional lifestyle magazine editor Khadijah to the mean-mugging, machine-gun-toting Cleo. Keep an eye out for a cameo from Dr. Dre.

While Belly has been criticized for its weak narrative, it’s still a fan favorite for its stylistic visuals from famed music video director Hype Williams and its star-studded cast, which included some of hip hop’s finest, like Nas, DMX, and Method Man. Nas and DMX make their acting debuts here as best friends/fellow drug dealers Sincere and Tommy, while Method Man plays ruthless enforcer Shameek.

All three rappers would continue to work in Hollywood — Nas would lend his talents to projects like The Get Down (2016) and DMX would go on to do a number of action movies like Romeo Must Die (2000) and Exit Wounds, but it’s Wu-Tang alumnus Method Man who has been the most prolific and impressive, from recurring roles on TV series like The Wire and The Deuce to big-screen efforts like How High (with longtime collaborator Redman), Keanu, and his most recent roles in Concrete Cowboy and Vampires vs. The Bronx.

By the end of the 1990s, MCs were popping up all over the place, like Master P and Snoop Dogg in I Got The Hook-Up (1998), Lil’ Kim in She’s All That (1999), Pras and Goodie Mob in Mystery Men (1999), and Ice-T all over network television. The 90s definitely kickstarted the rapper to actor pipeline. Sure, some of them were thrown in for their popularity, as celebrities often are, but that doesn’t take anything away from the authenticity, vulnerability, and versatility these rappers tapped into to deliver the goods.