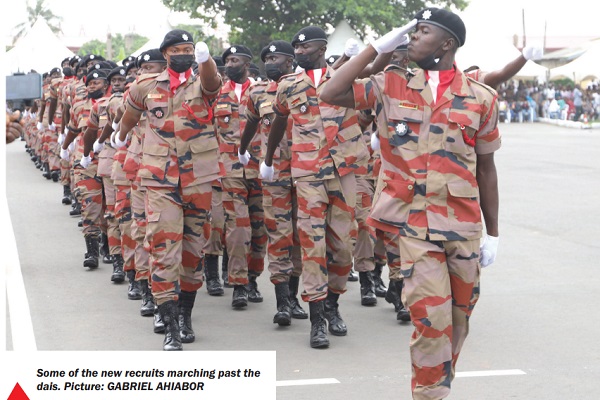 A total of 516 firemen and firewomen yesterday passed out from the National Fire Academy and Training School (FATS) in Accra after nine weeks of training.

The Recruit Course 54 comprised 294 males and 222 females who were selected from across the country.

They were trained in the rudiments of firefighting techniques.

The Minister for the Interior, Ambrose Dery, congratulated the recruits on a successful training.

“I am impressed by the smart turnout of the recruits and the sheer display of excellent march past and formation skills. I have no doubt that this is just a tip of the iceberg of the knowledge and skills that have been imparted to you during your period of training,” he said.

Mr Dery said over the years the GNFS had demonstrated its preparedness to protect the country from the ravages of fire and other life-threatening situations through quality training of personnel and fire safety education as they also put their lives on the line to save lives and property.

He, however, noted that there was still a section of the citizenry who were making the work of firemen difficult by not adhering to safety precautionary measures.

They were also not availing themselves of direction by firemen on how to protect their properties from fires through the installation of modern fire protection equipment.

“We need a change in attitude, we need to develop an attitude that gives us a constant awakening of fire safety in our homes, offices or anywhere we find ourselves. I believe it is one of the surest ways to build our nation,” the minister added.

Mr Dery said the government regarded the GNFS as an important stakeholder in nation-building, for which reason it was being retooled with modern firefighting equipment to deliver on its mandate.

“The many interventions that the service has made in terms of firefighting and fire prevention which has culminated in the reduction in fi re statistics are a testimony of the good works of the service, ably led by the Chief Fire Officer,” he added.

The minister further implored the recruits to be good ambassadors of the GNFS and be ready to accept postings to serve in any part of the country where their services may be needed.

“I urge you not to rest on your oars but to surge high in your chosen profession. You are all admonished to learn further from your seniors who have gathered solid experiences on the job over a long period of time.

“Acquaint yourselves regularly with the tenets of your noble profession so as to exhibit the highest level of professionalism at all times,” he said.