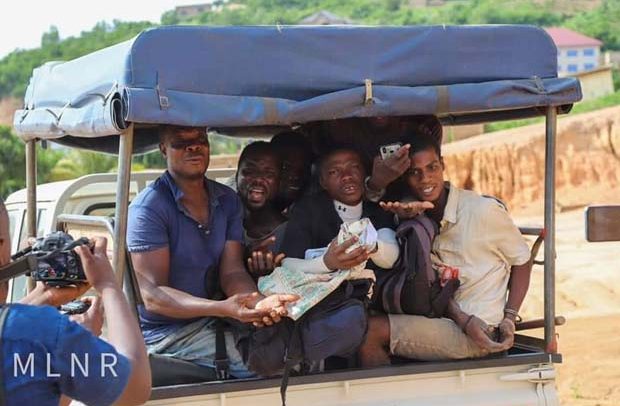 Six persons have been arrested at Tuba in the Ga South Municipality of the Greater Accra Region for undertaking illegal construction of residential properties in the area.

The six persons who were mainly artisans were apprehended by personnel from the Weija-Gbawe District Police Command on Wednesday, 18th May 2022 during an unannounced working visit by the Deputy Minister for Lands and Natural Resources, George Mireku Duker.

The six, all men with ages ranging from 25 to 30 years, were arrested for the construction of illegal structures.

The arrest is one of many decisive steps being taken by the Ministry to tackle the issues of encroachment, illegal structure development and sand winning in the earthquake-prone area.

At a media briefing after a tour of the area, Hon. George Mireku Duker stated that the suspects would be handed over to the appropriate authorities for investigation and possible prosecution.

He instructed the Weija-Gbawe Municipal Assembly to work closely with the police to arrest the owners of the various illegal projects ongoing in the enclave.

He warned that the Ministry will clamp down on all illegal activities at the site including sand-winning and the development of unauthorized structures.

He further issued a directive for the Assembly to as a matter of urgency demolish all illegal structures in the Ga South Municipality which has been established as an earthquake-prone area.

Hon. George Mireku Duker wondered why people will choose to erect structures and conduct activities at the place despite several warnings by the National Disaster Management Organization and its allied agencies.

He said the Ministry will not leave any stone unturned in ensuring that lives and properties are protected.

It will be recalled that NADMO in 2017 described parts of the place as ‘imminent risks’ and therefore called for the demolition of illegal structures at the Weija Hills and indicated that the move will help avoid future mudslides as happened in Sierra Leone in which atleast 499 people were killed.