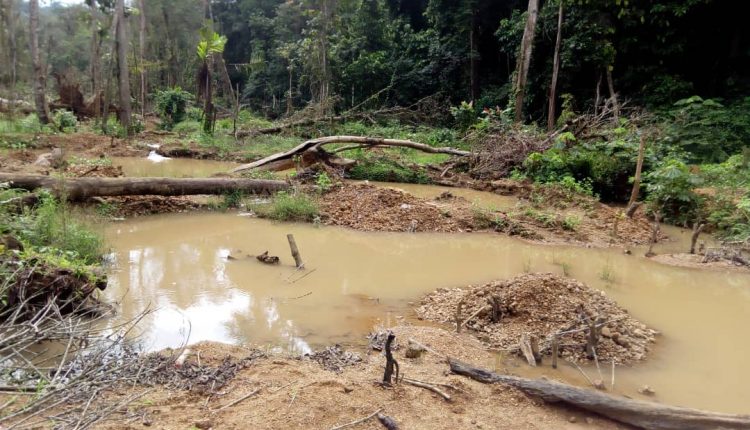 Wildlife plays a major role in forest regeneration and carbon storage by engaging in pollination and seed dispersal.

Its decline can adversely affect forest health, the climate and humans who depend on forests for their livelihoods.

In the first-ever global assessment of forest biodiversity by World Wide Fund for Nature (WWF), deforestation and degradation of forests are responsible for more than 60 percent of the decline in forest populations.deforestation

WWF is one of the world’s largest and most respected independent conservation organizations, with the mission to stop the degradation of the earth’s natural environment.

The study, titled ‘Below the Canopy’ tracked the development of 268 vertebrate species and 455 species of birds, mammals, reptiles and amphibians populations in forests around the world.

It found that the numbers of birds, mammals, amphibians and reptiles have dropped by an average of 53 percent since 1970.

The report which covers from 1970 to 2014, studied forest specialist index – an index that tracks wildlife that lives only in forests.

Of 112 forests dwelling primate populations, 40 were threatened by overexploitation, according to the study.

The Trend Can Be Reversed; Group calls for planetary emergency

While the findings paint a gloomy picture of the state of forest biodiversity, conservation success stories show us that forest-dwelling animals can recover with the right interventions.

From monkeys in Costa Rica to gorillas in Central Africa we find that, by releasing forest animals from the direct pressures they face, their populations can thrive.

“We must learn from these successes and seize 2020 as a pivotal moment to start reversing the decline in forest species, protecting the long-term health and integrity of our forests for nature and people”, the report stated.

In light of these figures, the WWF called on the international community to declare a global forest emergency and to begin taking steps to reverse the trend by adopting sustainable forestry policies and beginning the process of restoring lost forest habitats.

Protecting wildlife and reversing the decline of nature requires urgent global action. The report points to 2020 as a crucial year for securing international agreements for a New Deal for Nature and People, through a commitment by heads of state at the 75th United Nations General Assembly.

World leaders are also expected to review the progress made on the UN Sustainable Development Goals, the Paris Agreement and, crucially, negotiate new 10-year targets for the UN Convention on Biological Diversity (CBD).

Forests need to be front and centre of this New Deal for Nature and People because of their importance for biodiversity conservation, climate change mitigation and people, through the provision of ecosystem services, such as water and air purification, nutrient cycling, soil erosion control, and supplies of food, wood and other products.

According to the study, a decline in forest vertebrates has serious consequences for forest integrity and climate change, because of the role that particular species play in forest regeneration and carbon storage.

WWF researchers emphasized that a rich variety of animal species is vital to forest ecosystems. Other essential functions for forest ecosystems performed by animals include pollination and seed dispersal.

“Forests are our greatest natural ally in the fight against global warming. If we want to reverse the worldwide decline in biodiversity and prevent the climate crisis, we need to protect the forests and the species living there,” said Susanne Winter, Program Director at WWF Germany.

Winter pointed out that animals and forests live in symbiosis, and if certain species dwindle, flora will begin to suffer.

“Without animals, it is harder for forests to absorb carbon, as tree species important for protecting the climate could be lost without animals,” she said.

According to WWF researchers, overexploitation, invasive species, climate change and disease all harm population levels. While forest degradation was identified as the primary driver of population loss, restoring forests alone would not solve the problem.

To increase animal populations, the report said local communities must be engaged to address “overexploitation of wildlife, and tackling invasive species to address the multiple pressures on forest species.”

The study showed that conservation measures restored the population of gorillas in Central and East Africa and that of capuchin monkeys in Costa Rica.

“Future global frameworks and all future global forest assessments must include direct measures of both forest biodiversity and forest cover change. If we don’t address threats below the canopy we risk falling further into the ‘empty forests’ syndrome, where trees stand but much of the wildlife is lost.”

Global Lead on forests at WWF, Will Baldwin-Cantello said, “Forests are complex systems that depend on the wildlife that live in them to keep them healthy, and the rapid decrease in forest wildlife in recent decades is an urgent warning sign.

Not only are forests a treasure trove of life on earth, they’re also our greatest natural ally in the fight against climate breakdown. We lose them at our peril. We need global leaders to immediately kickstart action to protect and restore nature and keep our forests standing.”

Conservation Scientist at Zoological Society of London (ZSL), Louise McRae said, the first step towards protecting threatened wildlife is understanding trends in their populations and what drives their decline.

“By focusing our well-established Living Planet Index to create a new indicator for forest species, we can look below the canopy to see how wildlife within those forests are faring. Using this new indicator, we can continue to track forest wildlife and measure progress towards international agreements and biodiversity targets.”