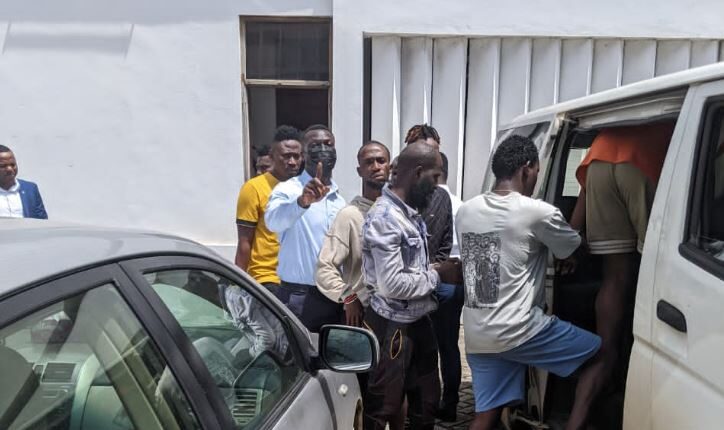 Seven Nigerians have been arrested in connection with cybercrime in Ghana, the Economic and Organized Crime Office (EOCO) has said.

A statement from the office revealed, that the suspects were arrested following an intelligence-led swoop on a house at Manhean, Obeyeyie in the Greater Accra Region.

Again, EOCO indicated some 21 persons believed to have been trafficked from Nigeria are rescued.

The suspects have since been placed on police remand by an Accra Circuit Court pending further investigations. They are to reappear on October 17.

They face 24 counts related to human trafficking, assaults and other organized crimes.

The facts before the court indicate that on August 29, this year, EOCO received an email from the National Agency for the Prohibition of Trafficking in Persons (NAPTIP) in Nigeria requesting their assistance in the rescue of some Nigerian victims of  cybercrime perpetrated by some fellow citizens.

This the prosecution said, led EOCO to conduct an investigation which uncovered hideouts of the seven who are members of the criminal group in Nigeria.

Further investigation uncovered the syndicate was partly based in Nigeria and Ghana.

The cybercrime menace is gradually gaining ground in West Africa, Nigeria and Ghana in the eye of the storm. In October 2019, Minister for Communications, Ursula Owusu-Ekuful noted that cybercrimes constitute one of the many challenges engendered by the growth of internet penetration in the country.

She said this at the launch of this year’s Cyber Security Awareness Month as well as the Cybersecurity Incident Reporting Points of Contact (PoCs) in Accra on Tuesday, October 1.

The month-long observation will see educational and awareness creation activities and training workshops across the country, while the PoCs will serve as centres through which cyber-related incidents can be reported and mitigated by appropriate agencies.

It will be recalled that on August 6, 2020, 18 foreigners were remanded by the Wa Circuit Court over their suspected involvement in cybercrime.

The accused persons were slapped with three counts of obtaining electronic medium falsely, possession of illegal devices and failing to comply with the ban on travelling.

In 2020, President Akufo- Addo assented to law ,the Cybersecurity Act, 2020 (Act 1038), as well as the creation of the Cybercrime Unit at the Criminal Investigations Department of the Ghana Police Service.

At the regional and continental level, the country has ratified relevant cybercrime and cybersecurity international conventions and treaties: such as the Convention on Cybercrime, also known as the Budapest Convention.