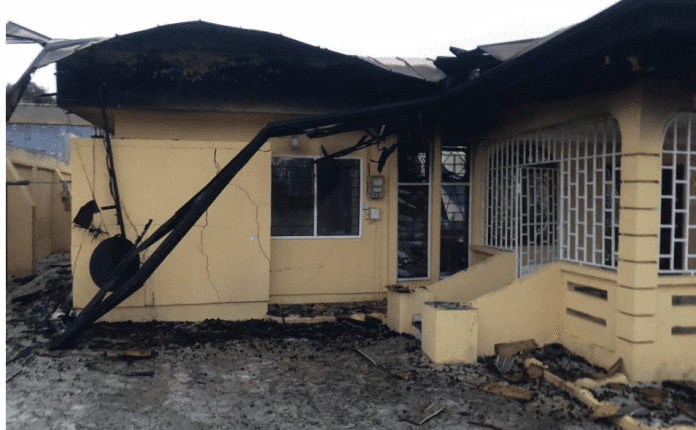 A 74-year-old man has perished after fire gutted a 5-bedroom house at Aburaso in the Ashanti Region.

Reports indicate that five others were seriously injured, with several properties reduced to ashes in the incident, which occurred around 1 am on Saturday, 10 September 2022.

The deceased got trapped in one of the rooms when the fire started, leading to his death.

He has been identified as Stephen Dapaah, a former Ashanti regional director of the Audit Service.

The Ghana National Fire Service (GNFS) has commenced an investigation to ascertain the cause of the fire.

The other five who sustained injuries are receiving treatment at the Komfo Anokye Teaching Hospital.

The body of the deceased has been deposited for preservation and autopsy at the same facility.

The Ashanti region has been saddled with fire outbreaks in 2022.

In April, a fire incident at Meduma in the Kwabre East Municipality of the Ashanti Region resulted in the death of an 11-year-old girl.

The inferno affected a house near the Komfo Anokye SHS where the girl lived at about 1:20 pm on Tuesday, 5 April 2022,

The fire destroyed the building and other items valued at several thousand cedis before firefighters arrived to douse the flames.

The Ashanti Regional Public Relations Officer of the Ghana National Fire Service, D.O III Peter Addai, said they got a call about the fire incident at about 1:57 pm.

“We swiftly responded, and when we got to the scene, the fire engulfed the whole house and was at its fully developed stage. We managed to put it under control and extinguished it. An 11-year-old girl lost her life as a result of the fire,” he told Citi FM.

The body of the deceased was retrieved and given to the police, after which it was deposited at the mortuary.

The cause of the fire is not immediately known, but firefighters have commenced investigations into the incident.

The Ashanti Region is prone to fire outbreaks, with many incidences leading to loss of lives.

One person was confirmed dead as fire swept through scores of structures at Asafo near the VIP Bus terminal in Kumasi.

The fire started at about 2:23 pm on Sunday, 2 May 2021, and razed all the structures located in the entire slum.

The cause of the fire was not known, but properties worth hundreds of Ghana cedis were lost at the pillow and mattress manufacturers’ enclave.

Two fire tenders were dispatched to the scene, and firefighters spent over four hours before bringing the fire under control.

The body of the deceased was conveyed to the Komfo Anokye Teaching Hospital morgue.

The Komfo Anokye Teaching Hospital Fire Commander, Divisional Officer Grade 3, Simon Ben Boadu, who confirmed the incident, said his men had a tough time dousing the inferno due to the dense population and the intensity of the fire.

Over 30 Shops Gutted By Fire At Kumasi Central Market

Parts of the Kumasi Central Market was engulfed in fire on Sunday, 18 April, which affected 30 shops.

The affected area was dominated by persons who traded in leather materials.

The fire was attributed to illegal wiring.

The Ashanti Regional Public Relations Officer (PRO) of the Fire Service, D.O 3 Desmond Ackah, said: “Our preliminary investigations point to the fact that the place is bedevilled with a lot of illegal wiring activities. Those wirings have been compromised, and they don’t have any protection. They lack earthing systems, breakers, fuses and all the systems that can take excess circuitry”.

The same area was affected by a fire at least twice in 2020, with more than 10,000 people being displaced.

Fire razed more than 30 shops in the early hours of 10 January, prompting firefighters to deploy five tenders to ensure the fire did not spread to other shops.

The police have subsequently arrested the welder, identified as Kofi Gyimah, 37, and Paul Akwasi Kwakye, a 51-year-old shop owner.

At the KNUST, fire swept through 10 shops at a mini-market behind the Republic Hall.

Several items in container shops were destroyed when the fire was brought under control by firefighters at about 02:55 am.

University Relations Officer (URO) of KNUST, Dr Daniel Norris Bekoe, told theghanareport.com there were no fatalities, contrary to reports by some people on social media.