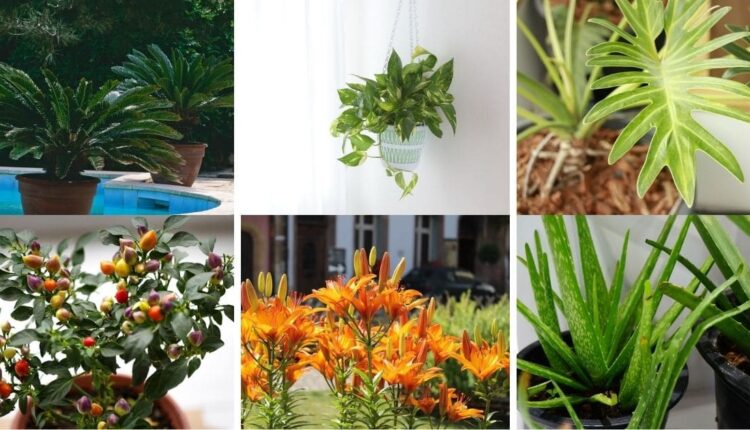 8 Household Plants to Avoid if You Have Cats

There is an abundance of beautiful house plants to choose from, but if you have cats, there are other considerations to be made other than just looks.

Some plants contain chemicals in their leaves or flowers that are toxic to cats, meaning that unpleasant or even deadly symptoms may occur if consumed.

Some cut plants may even leach toxins into the water they are being kept in; these toxins could be consumed by your cat if the cat drinks some of the water out of the plant’s vase or container.

Along with these tips that are a must if you have pets around, you will also want to take a look at these great gardening hacks to make sure you grow the best harvest of flowers or vegetables this year! 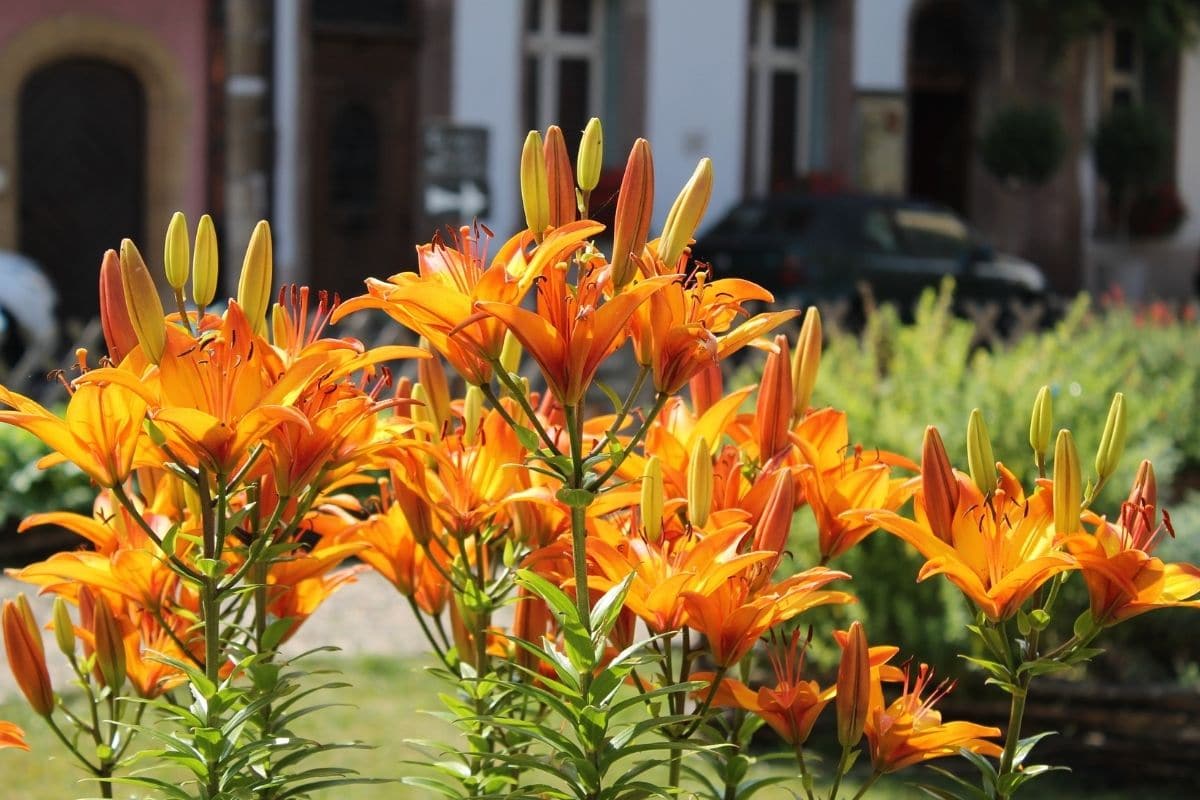 Certain varieties of lilies are very dangerous to cats— as houseplants, cut flowers, or landscaping plants. Lilies that are members of the ‘true lily’ and ‘daylily’ families are particularly dangerous, and cats are highly susceptible to these house toxins.

All parts of these lilies contain poisonous chemicals including the pollen they produce and even the water from vases of cut lilies.

Keeping lilies in your home should always be avoided if you have cats in the house. Cats may chew on the flowers, leaves, or stems; lick the pollen from their paws after touching a flower, or drink the water from a vase—all of which could have serious repercussions for your curious pets.

While all animals may have adverse reactions to consuming part of these lilies, cats are particularly susceptible and are prone to kidney failure as a result.

Symptoms that your cat may develop after consuming any portion of these lilies include vomiting, loss of appetite, decreased activity levels and drooling.

Signs to watch for which may indicate kidney failure include increased urination and dehydration.

Without proper treatment, kidney failure can occur between 24 and 72 hours after ingesting any part of a lily plant. The window for treatment after your cat has consumed a lily is 18 hours. With proper treatment early enough, though, your cat should be just fine. 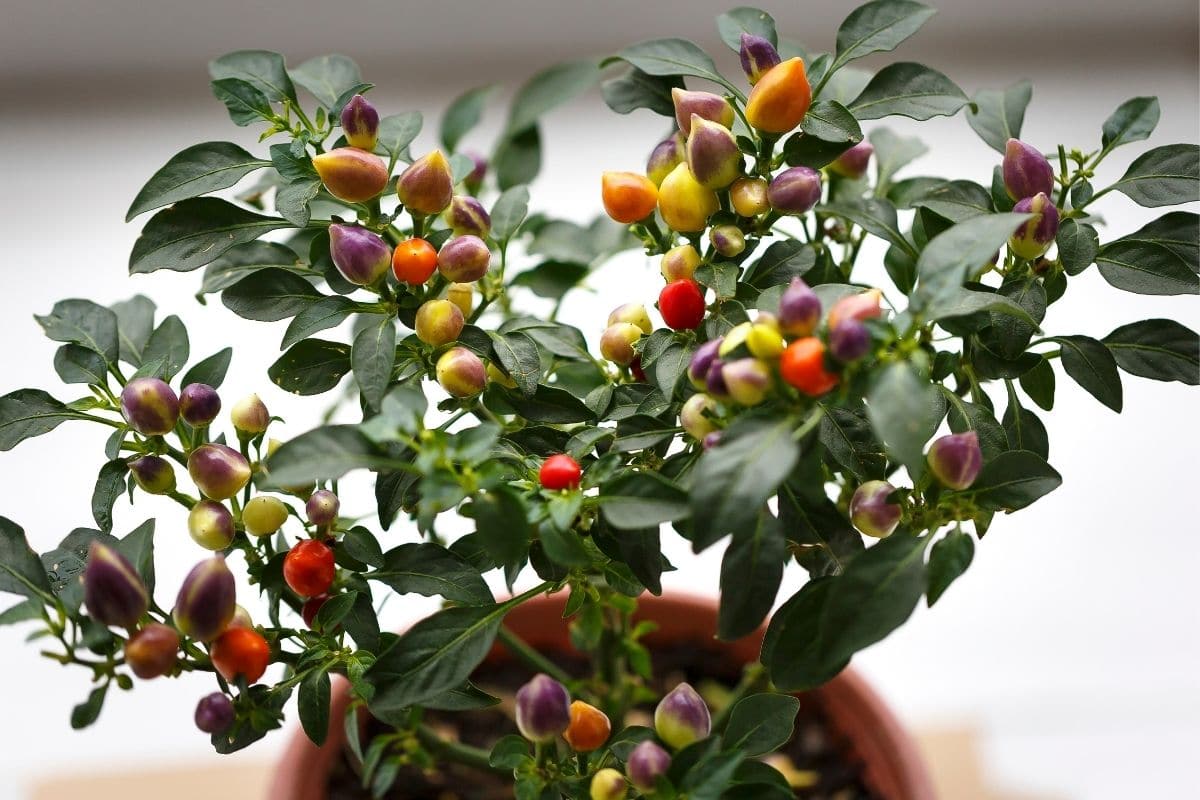 Ornamental pepper plants are often kept as houseplants for their brightly colored orange berries which add a pop of color to your home.

With cats around, however, a different colorful plant should be considered in place of an ornamental pepper plant, as they are toxic to cats.

Although these pepper plants have a foul taste—a natural defense mechanism from predators—many cats are still tempted to give it a few bites out of curiosity or boredom.

Every part of the ornamental pepper plant contains solanine, a toxin that affects most animals, including humans.

If any part of the plant is consumed by a cat, symptoms may include vomiting, diarrhea, shock, and seizures. Getting your cat to a veterinarian right away can help to reduce the effects of these symptoms.

Thankfully, consuming an ornamental pepper plant is rarely fatal to a cat because they will not generally eat large portions due to the strong taste. 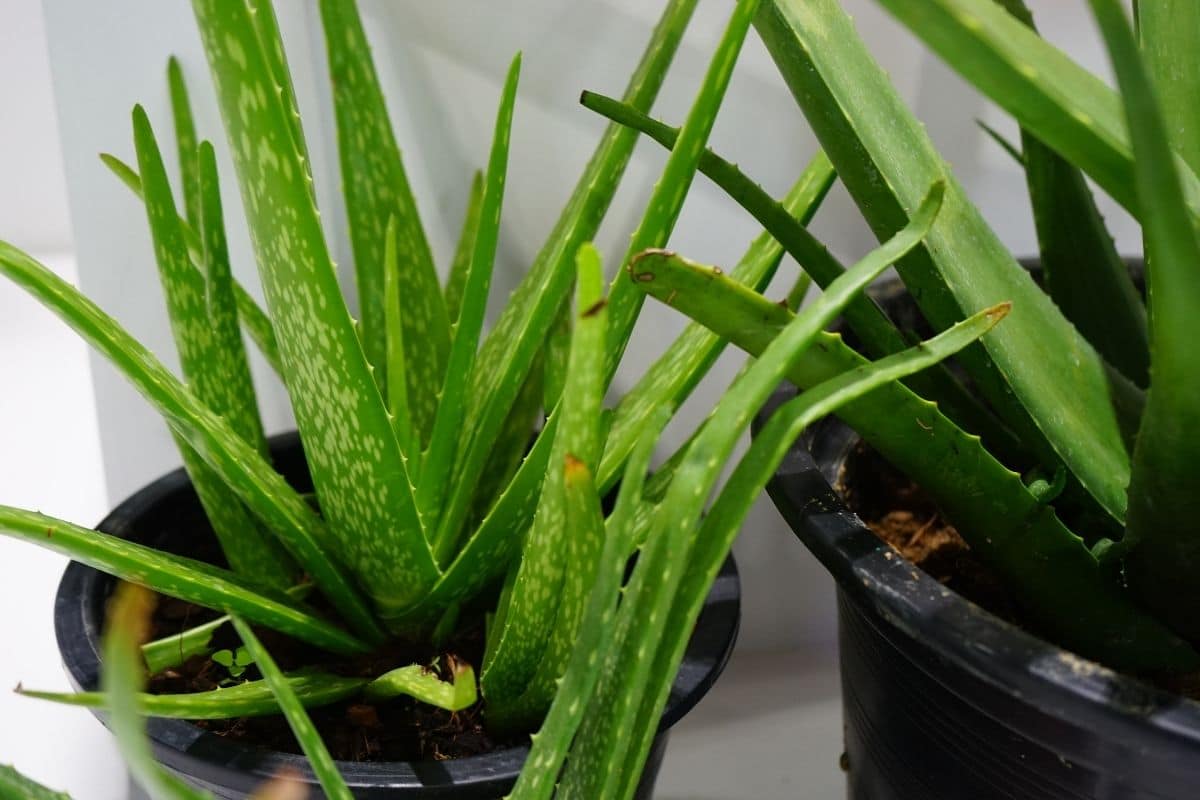 Aloe vera plants are a fun houseplant to keep not only for their unique look but also as a sunburn remedy for those hot summer days.

The leaves of an aloe vera plant can be cut open to expose the sap, which many of us know as aloe vera cream or gel—it’s the same stuff you purchase in stores.

While a neat houseplant, it can make your cats sick if they ingest any of it.

While posing no threat to humans, smaller animals can be affected negatively if they decide to take a bite out of a leaf.

Aloe vera plants are considered moderately toxic to cats, but they are very rarely fatal if consumed.

While not fatal, the symptoms that may occur can have lasting effects on your cat under certain circumstances.

Some of these symptoms include vomiting, diarrhea, lethargy, anorexia, tremors, depression, and changes in urine color.

It is always advised to check with a veterinarian if a toxic plant is consumed; however, if only a small portion of an aloe vera plant is eaten, they may just recommend waiting out the symptoms.

Even though aloe vera appears on the list of drought-friendly plants, it’s still one to consider carefully before you plant. 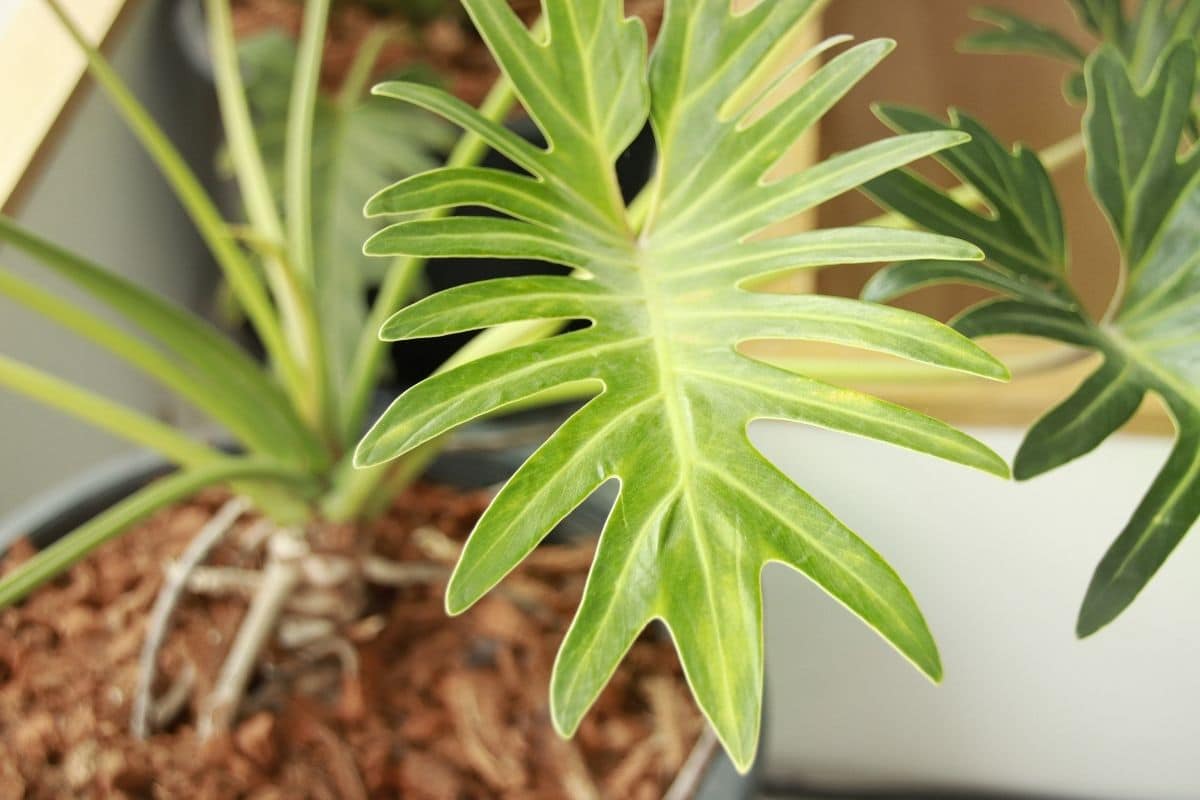 Philodendrons are a common leafy houseplant or desk plant that may attract unwanted visitors, such as cats. Many cats are tempted by its crisp leaves, and they love sinking their teeth into them.

There are a few different varieties of philodendrons commonly known as swiss cheese plant, heartleaf, and fiddleleaf.

All varieties of philodendrons are toxic to cats, so keeping them away or avoiding them altogether may be the best course of action for cat owners.

Symptoms that your cat may experience after eating the leaves of a philodendron plant include oral irritation—which will hopefully prevent them from eating too much—such as swelling of the mouth, tongue, and lips; drooling; vomiting; and difficulty swallowing.

If you notice any of these symptoms, it is important to call a veterinarian right away to avoid any lasting harm. Thankfully, ingesting these plants is rarely deadly for a cat. 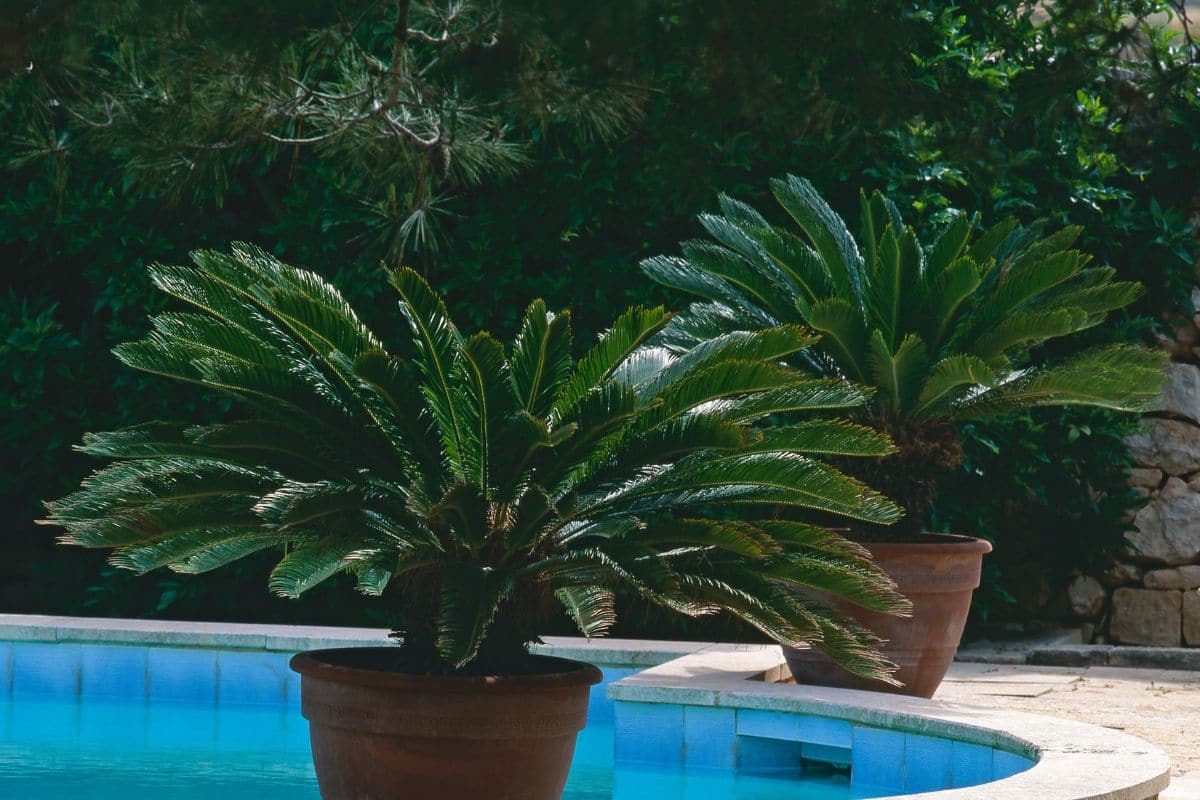 Sago palms are tropical-looking plants that are often kept as houseplants in climates where it is not warm enough to keep them outside all year round.

While these plants may help you feel as though you are somewhere warmer, they should not be kept in any location where an animal, such as a cat or dog, can get to them.

These plants contain a toxin called cycasin, which can be found in all parts of the plant, including the nuts. Cycasin is very toxic to cats.

It is important to avoid keeping sago palms in your home if you have cats because the outcome of eating part of one can be deadly to many small animals, especially cats.

The cycasin found in the plant attacks the liver and can lead to liver failure, often resulting in death if not treated right away.

Symptoms that may indicate your cat has consumed part of a sago palm include vomiting, diarrhea, lack of appetite, blood in the stool, lethargy, excessive thirst and urination, and neurological disorders.

All of these symptoms can indicate liver failure and should be treated as such. Contacting your vet immediately if you suspect ingestion of a sago palm is crucial to ensure your cat gets the care he or she requires. 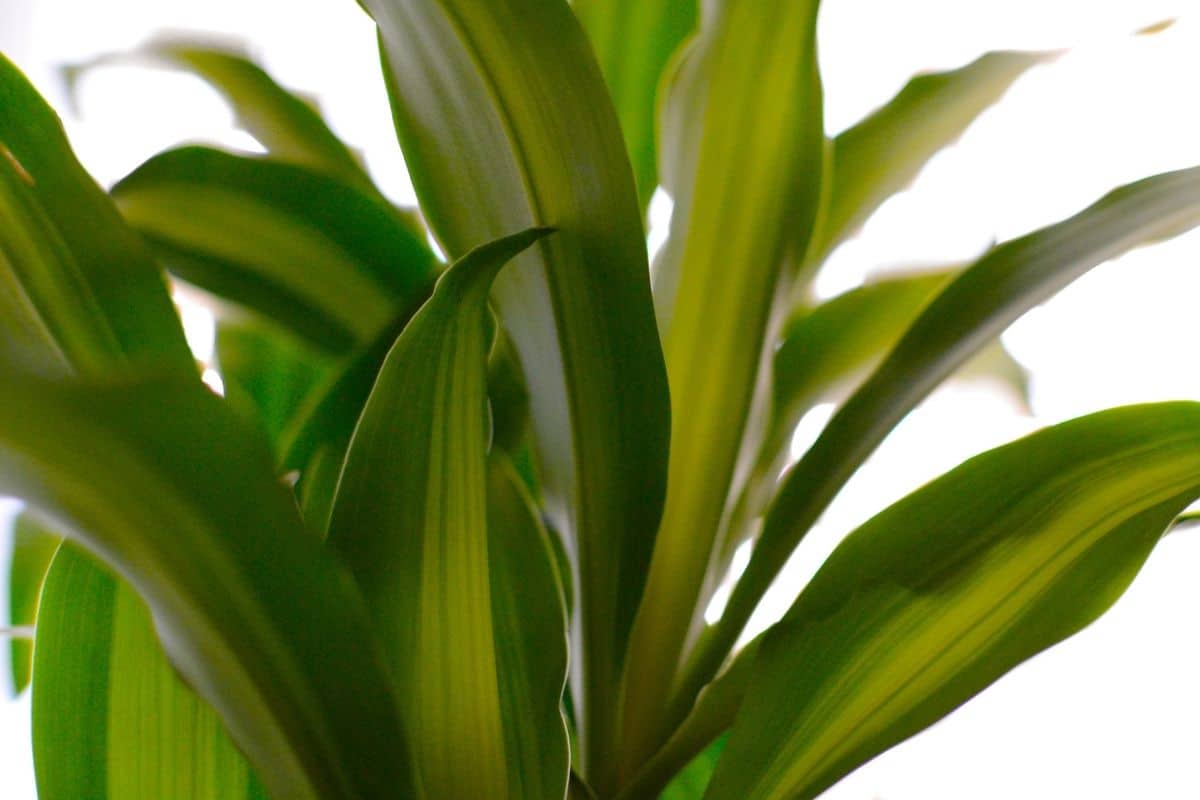 Corn plants are another common houseplant that—while your cats may think they look appetizing—should be avoided around felines due to their toxicity.

Corn plants are scientifically known as dracaena fragrans and go by many other names including cornstalk plant, dracaena, dragon tree, and ribbon plant. The toxin found in their leaves is called saponins and is poisonous to cats.

While not often deadly, there are some negative symptoms that can arise for a cat that decides to make a snack out of your corn plant.

These symptoms include vomiting (sometimes with blood), anorexia, drooling, depression, and dilated pupils. To help ease symptoms and ensure there are no lasting effects, it is important to call your veterinarian if you suspect that your cat has eaten any portion of a corn plant. 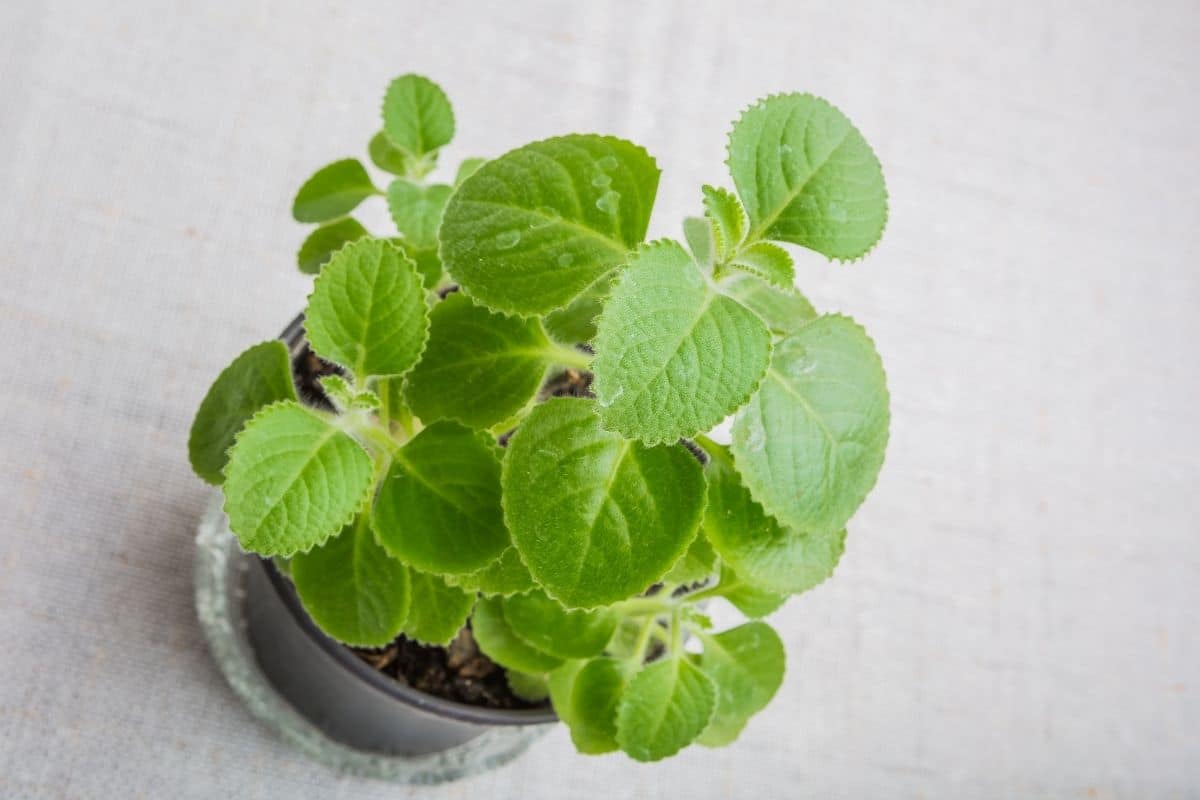 Spanish thyme does not have the same uses as herbal thyme, as a majority of the plant is considered poisonous. Many grow Spanish thyme as a decorative house plant, to extract essential oils, or to harvest its edible red fruits. While this may sound like an intriguing plant to keep, it is probably best avoided if you have cats in the house as the toxins will negatively affect them if ingested.

The essential oils found in this plant are what make this plant poisonous to animals such as cats. Symptoms that you may see in your cat if they ingest Spanish thyme include vomiting and diarrhea (sometimes with blood), anorexia, and depression.

While not often deadly, it is in your cat’s best interest that you contact a veterinarian right away to ensure his or her safety and help alleviate symptoms.

If you are planting herbs, you may want to check out this list of ways to preserve fresh herbs all year long.  Tons of great ideas there to make it easy to have them on hand any time you need them. 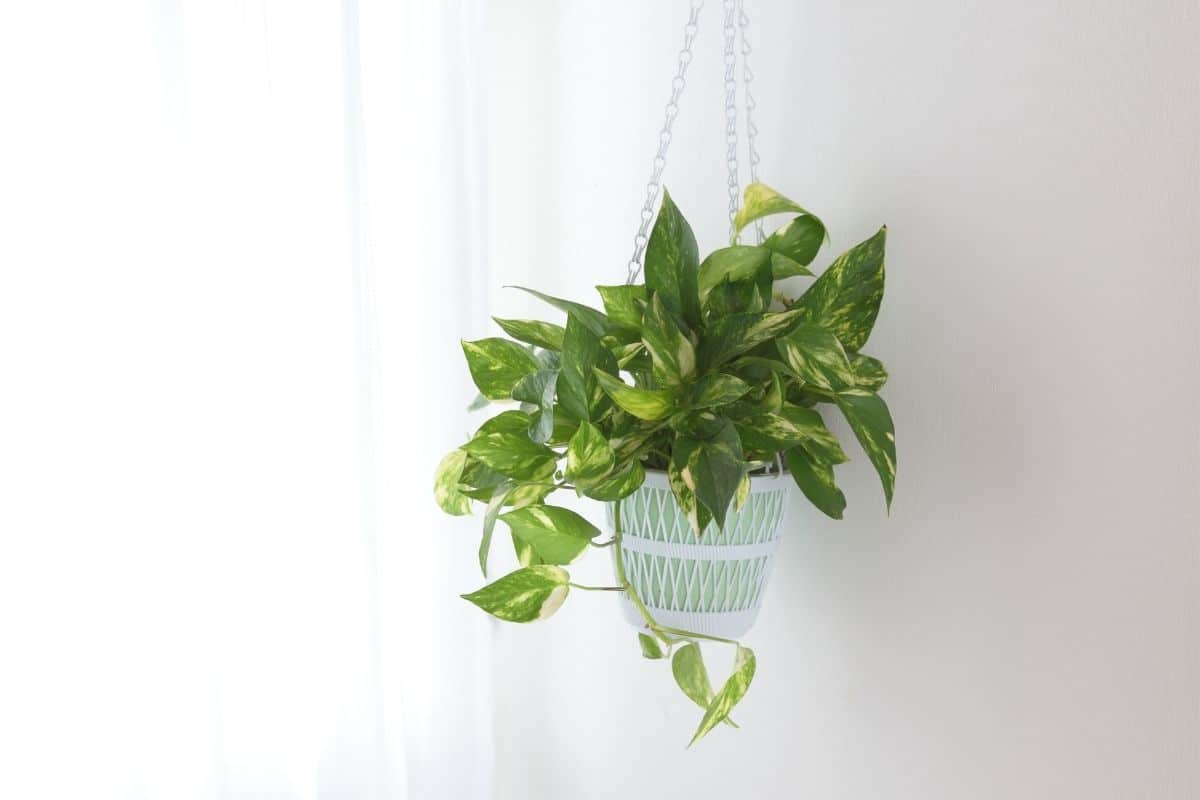 Pothos are another popular houseplant that may just be too tempting to your cat to justify keeping around. These plants are toxic to cats if ingested, and their long hanging vines—generally kept in a pot hanging from the ceiling—make them even more enticing than many other houseplants.

The scientific name for the pothos plant is epipremnum aureum and is also commonly known as devil’s ivy, taro vine, and ivy arum.

The toxic principles of the pothos plant are insoluble calcium oxalates which can be found in the leaves and stems of the plant.

If ingested, symptoms include oral irritation; intense burning of the mouth, tongue, and lips; excessive drooling; vomiting; and difficulty swallowing.

Contacting a veterinarian right away can help reduce these symptoms and ensure no long-lasting negative effects for your cat.

What Do I Do If My Cat Eats a Toxic Plant?

Cats are notorious for masking their pain, and they may even hide when in pain, making it difficult for owners to properly evaluate their condition.

When it comes to cats, it is important to be aware of what plants they have access to and watch for any signs of interest that your cats may have towards these plants.

An interested cat is sure to investigate further, but they may wait until they are alone—especially if your plant is kept somewhere the cat knows may lead to a scolding. For these reasons, it is important to pay extra close attention to cats around potentially harmful plants.

If you suspect that your cat has eaten a toxic plant, whether that be because the cat appears ill or your plant has a few cat-sized bite marks in it, contact a veterinarian right away.

Timing can be crucial when it comes to poisoning because there may be a window of opportunity to get the toxins out of the body before too much harm is done.

While this may seem like a no-brainer, if you notice your cat chewing on a toxic plant, take the plant away immediately.

Cats may not always start to experience symptoms immediately, and they may continue to feast on the plant while you proceed to call your veterinarian to come up with a plan of action—all the while potentially making the situation even worse.

In addition, it is important not to induce vomiting unless directed to do so by a veterinarian; calling them should always be the first step.

Of course, you may just want to consult this list of household plants to avoid if you have cats – by not growing them at all, you may be able to avoid a disaster!