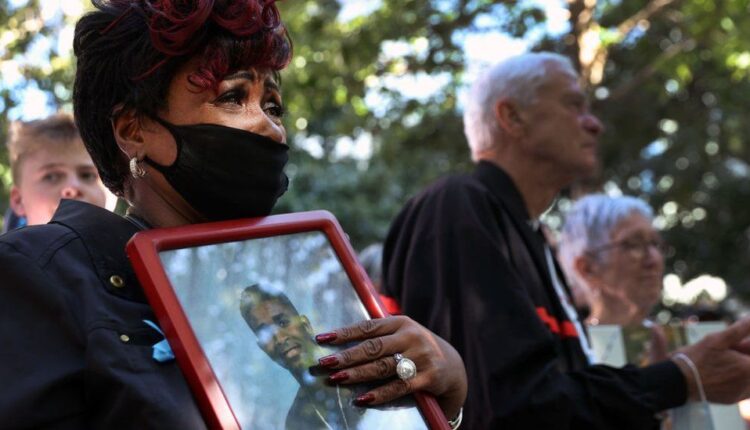 Relatives of people who died on 9/11 have read out victims’ names, as the US marks 20 years since the deadliest terror attacks on its soil.

Many struggled to hold back tears at the ceremony held at Ground Zero, the site of the Twin Towers destroyed in the attacks by al-Qaeda militants.

“Twenty years feels like an eternity, but it still feels like yesterday,” cried Lisa Reina who lost her husband.

A minute’s silence was held at the exact time each hijacked plane crashed.

George W Bush, who was the US president at the time, gave a speech in Pennsylvania, where one of the planes crashed into a field after passengers overpowered the hijackers.

“The world was loud with carnage and sirens, and then quiet with missing voices that would never be heard again,” he said.

“It’s hard to describe the mix of feelings we experienced.”

The official memorial in New York started with a minute’s silence at 08:46 (12:46 GMT) – the exact moment the first plane hit the North Tower of the World Trade Center in 2001.

All morning, roses continued to be placed beside the names of the 2,977 victims etched into the Ground Zero memorial.

There were five more moments of silence over the next few hours – marking the time when the second plane crashed into the South Tower, when a third jet struck the Pentagon just outside Washington DC, when the fourth plane crashed in Pennsylvania, and finally when each tower collapsed.

The tributes continued into the night, as two beams of light shone four miles (6.4 km) into the sky.

‘Until we meet again, my love’

With thousands of names to read out, the list took hours to complete.

Mike Low, whose daughter was a flight attendant in the first plane that hit the World Trade Center, started it off. He thanked those who helped his family get through “the darkest days of our lives”.

Mr Low recalled the “grey and black world” of New York in the aftermath of the attack, and asked for 9/11 to be remembered “not as numbers or a date, but the faces of ordinary people”.

Lisa Reina was nearly eight months pregnant when her husband Joseph was killed.

Fighting back tears, she said: “Our son is the spitting image of you… Continue to watch over us and your family. Until we meet again, my love.”

A generation of relatives has been born since the attacks, and some took to the stage to share in the name-readings. One young girl told her late uncle: “I never met you, but I really miss you.” 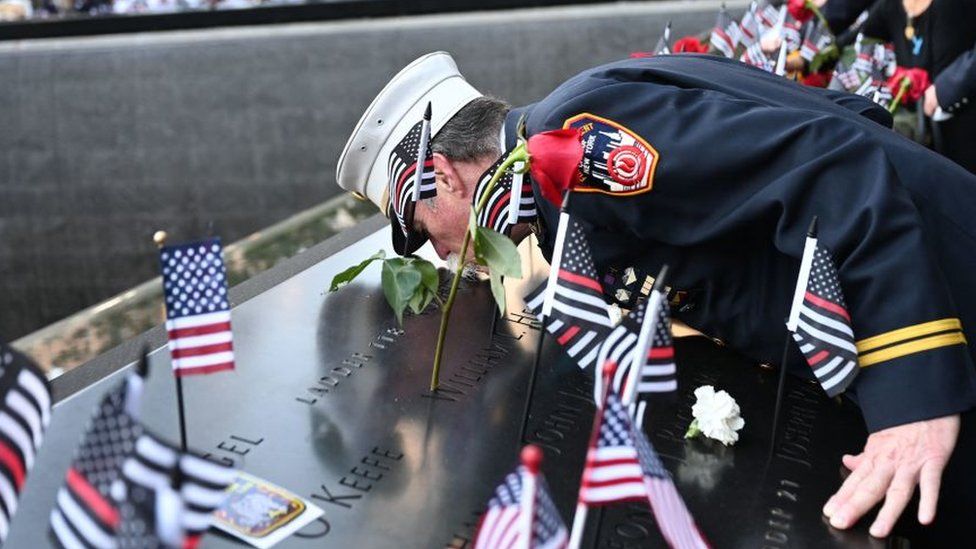 Presidents past and present

In a video released on the eve of the anniversary, he paid tribute to the victims.

“No matter how much time has passed, these commemorations bring everything painfully back as if you just got the news a few seconds ago,” he said.

“We must challenge ourselves to look back, to remember, for the sake of our children… and for that reason, we must also look forward,” she said.

It is thought that the hijackers of the plane that crashed into the Shanksville field meant to attack the Capitol Building in Washington DC, but passengers and crew fought back. At a wreath-laying ceremony, Mr Biden said they had shown “genuine heroism”.

On Saturday morning, former President Donald Trump released a video statement praising first responders and adding it was a “sad time for the way our war on those that did such harm to our country ended last week” – referring to the US withdrawal from Afghanistan.

Mr Trump did not attend the ceremony in New York, however he did visit a Manhattan police station near Trump Tower. Later on Saturday he was due to provide commentary for a boxing match in Florida with his eldest son, Donald Jr.

Other ceremonies included a vigil at the New York Fire Department’s memorial wall – a 56-foot bronze wall that honours the 343 firefighters who died on the day of the attacks.

In total, 441 first responders were killed, the largest loss of emergency personnel in US history.

At the Pentagon outside Washington, a dawn service was held.

Two pipers played Amazing Grace as a small group of military leaders looked on in solemnity, the building bathed in blue light.

A chapel of remembrance now marks the spot where American Airlines flight 77 crashed into the US defence building.