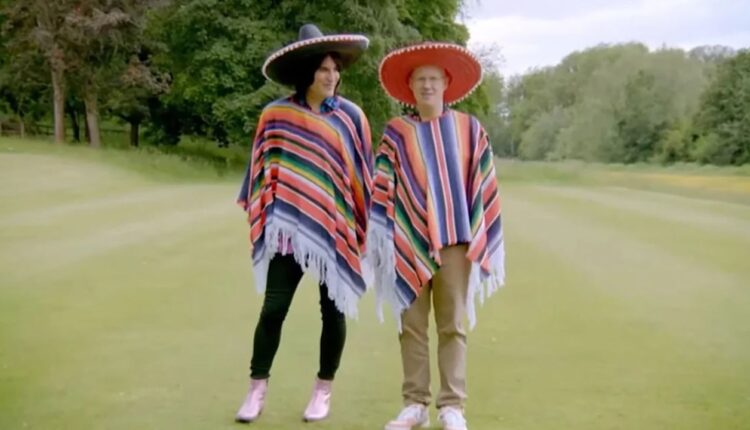 A recent episode of “The Great British Bake Off” is drawing criticism from some viewers for its depictions of Mexican culture.

In the “Mexican Week” episode of the reality competition series, which aired in the UK on Tuesday and was released in the US on Friday, contestants are tasked with making pan dulce, tacos and  tres leches cake – dishes that critics saw as cliché and uninspired. The hosts, meanwhile, pepper in attempts at tongue-in-cheek humor that not all viewers found funny.

In the opening scene, hosts Noel Fielding and Matt Lucas wear sombreros and serapes while quipping about whether people might find such jokes offensive. At another point, Fielding muses, “So, is Mexico a real place?” while Lucas, in turn, likens the country to Xanadu. Other scenes include Lucas shaking maracas and contestants butchering pronunciations for guacamole and pico de gallo.

The juan and only Matt & Noel welcome you to Mexico Week! 🇲🇽🇲🇽🇲🇽 #GBBO pic.twitter.com/A4aX43H5rd

The episode’s flippant tone and use of stereotypes rubbed many viewers the wrong way.

Lesley Tellez, a food journalist and author of the cookbook “Eat Mexico: Recipes from Mexico City’s Streets, Markets and Fondas,” said that while she hadn’t seen the full episode, she found the snippets that were circulating on social media unimaginative.

Despite its diversity, Mexican cuisine gets overshadowed in the culinary world by European cuisines, she added, and the show’s treatment of it perpetuates misconceptions.

“I think they should have been a lot more thoughtful about it,” Tellez told CNN. “It reduces Mexican food to stereotypes – to being this two-dimensional cuisine.”

Though it would have veered from the show’s typical format, Tellez said she would have liked to see “The Great British Bake Off” bring in a Mexican chef as a guest, as opposed to having two White, British judges serve as authorities.

Alejandra Ramos, host of “The Great American Recipe” on PBS and a chef of Puerto Rican descent, said the episode reflected a lack of diversity behind and in front of the camera.

“This would have been a perfect moment to bring in a Mexican guest judge or host to lead the discussions on camera and to guide the contestants,” she wrote in an email to CNN. “There should have also been consultants with actual Mexican cultural and food background and expertise brought in to consult on the story, scripting, food styling and challenges – as well as the post-production and marketing.”

Ramos also questioned why a baking competition would challenge contestants to make tacos – a point viewers of the show have also called out on social media.

“Mexico has incredible pastries, cakes, breads, and even baked savory dishes that they could have made instead,” she said. “But that would have called for more actual knowledge about Mexican culture and cuisine which is clearly lacking here.”

CNN has reached out to “The Great British Bake Off” for comment.

During a “Japanese Week” episode in 2020, some contestants devised concoctions that instead relied on Chinese and Indian flavors, which some critics said amounted to conflating distinct Asian cuisines. That same episode saw Lucas refer to katsu curry as “cat poo curry.”

“Anyone who’s watched GBBO also knows how prickly the judges get when they think something has too much spice, how easily they exoticize non-British foods, and how the standard marker of a good baker is their ability to make a Victoria Sponge,” Jaya Saxena wrote in a 2020 article for Eater.

Former contestants have also spoken out on the show’s diversity issues.

In an interview with Insider last year, Rav Bansal called for new hosts and judges who were better versed in non-English ingredients and recipes, and who could better reflect the show’s diverse cast of contestants. Ali Imdad expressed surprise that production staff had allowed certain missteps to occur. Ruby Tandoh referred to the show as a “strange vehicle for change,” writing in an essay for the food publication Heated that it had launched the careers of several Black and brown chefs while being “steeped in the symbolism of an old-fashioned, implicitly white Britishness.”