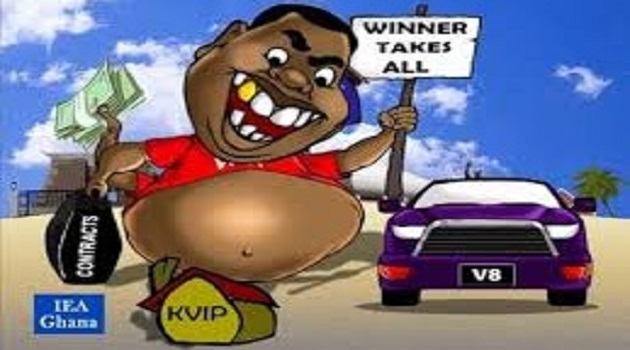 “Kpéndé, bliba, ne me fui asi wo dé ata via.” This is an Ewe expression which loosely translates as, “ will you cry if I snatched the food from your hand?”.

As kids, we played some weird kind of games. We entered into a pact to snatch food from the hands of our friends.

The parties in the pact interlocked their forefingers and recited the line quoted earlier. Essentially, they agreed between themselves, that if one had food in their hands and not careful, the other was allowed to hit the wrist of the holder of the food so hard, the food would fall out of their hands, and once it fell, the owner lost their rights of ownership.

Outcomes of the latter were less acrimonious than those of the former. In the latter, it was the holder of the food who determined what “two equal halves” meant. So they could skew the portion sizes in their favour and will get away with it. A bit of argument ensued but usually, the owner of the food had the final say. In the former, however, the winner took everything; it was a lot more aggressive.

Once the aggressor hit the wrist of the holder of the food and the food fell, that was the end of the right to ownership.

The aggression with which the food was snatched, usually generated anger and a swift reaction. The owner was taken by surprise. 2020 is an election year in at least eight countries in Africa, including Ghana.

This will be Ghana’s seventh under the Fourth Republican Constitution, and not a single one of the previous six had taken place without issues. The two major political parties and their elements have always found ways and means to ramp up the tension in this country in the lead up to every one of them.

The 2012 elections had infamously gone into our history books as one of the most fiercely contested. Its outcomes eventually got determined by the Supreme Court of the land. The tension on the day of the verdict was palpable.
At the root of all that was “kpéndé”, winner takes all, loser gets nothing.

Our constitutional democracy does not make room for a losing contender to make any direct contributions to the governance of the nation. Political parties make huge investments into electioneering campaigns.

There’s no state funding of political parties hence private individuals hijack the process, pump cash into it with the intent to claw back when the parties they sponsored wins. As such, the winner becomes vulnerable as they are obliged to sort out their sponsors at the expense of the citizenry.

In this equation, there cannot be any
space for the opposition. What this means is that the contest is fierce and each contender will deploy every single armour in their arsenal to win. And this most certainly includes violence and intimidation of the opponent.

The 2020 electioneering campaign is beginning to gather steam. Very soon, the two biggest political parties will start resorting to all kinds of shenanigans to make their voices heard or their muscles seen.

The myriad of young jobless men walking the streets of our cities will be recruited, radicalised and deployed to visit mayhem on their opponents. They’d be used and dumped. They only remember them
when the next election is around the corner.

This year’s elections will be contested on the back of failed promises and the return of a failed regime. In the 2016 elections, the National Democratic Congress, led by John Mahama was thrown out for incompetence and corruption.

In 2020, the New Patriotic Party, led by Akufo Addo, may be thrown out for some reasons. One sure thing is the acrimony that will characterise the campaigns and
the election itself. This will be buoyed by the suspicions generated by the discussions around the proposed new electoral register. It will be feisty.

Let’s not kid ourselves. We are not out of the woods yet.

Abdul Hayi Moomen writes: The demolition may be legal but not logical

The life of African students in Wuhan amid coronavirus epidemic