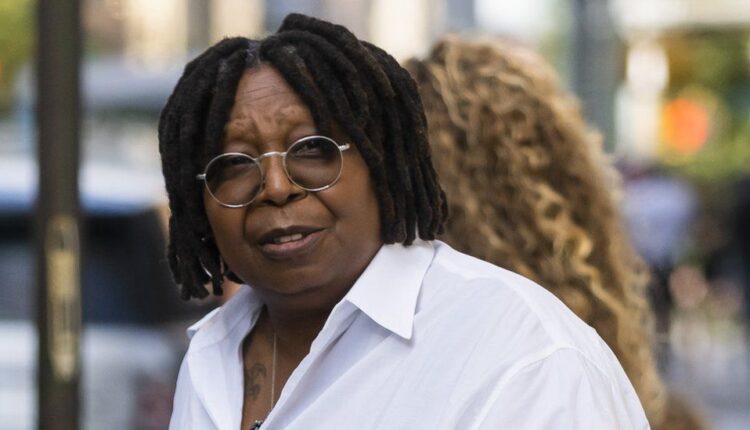 ABC News suspended “The View” host Whoopi Goldberg for two weeks on Tuesday night, one day after she drew significant criticism for falsely declaring that the Holocaust was “not about race.”

“Effective immediately, I am suspending Whoopi Goldberg for two weeks for her wrong and hurtful comments,” ABC News president Kim Godwin said in a statement.
“While Whoopi has apologized, I’ve asked her to take time to reflect and learn about the impact of her comments,” Godwin added. “The entire ABC News organization stands in solidarity with our Jewish colleagues, friends, family and communities.”
As Godwin said in her statement, Goldberg had in fact apologized for her remarks. On Monday night, Goldberg apologized in a note posted to Twitter. And on Tuesday, Goldberg opened up “The View” offering yet another apology.
“Yesterday on our show, I misspoke. I tweeted about it last night but I want you to hear it from me directly,” the comedian and actor said. “I said something that I feel a responsibility for not leaving unexamined, because my words upset so many people, which was never my intention. I understand why now, and for that I am deeply, deeply grateful because the information I got was really helpful, and it helped me understand some different things.”
“I said the Holocaust wasn’t about race and was instead about man’s inhumanity to man,” Goldberg said Tuesday on “The View.” “But it is indeed about race because Hitler and the Nazis considered Jews to be an inferior race.”
She continued, “Now, words matter and mine are no exception. I regret my comments, as I said, and I stand corrected. I also stand with the Jewish people as they know and y’all know, because I’ve always done that.”
Her comments bothered staffers across ABC News. While some accepted her apology, others believed disciplinary action was warranted, according to conversations with employees.
Goldberg is no stranger to controversy, having made a number of comments throughout her nearly 15 years on the program that have sparked backlash.
In 2009 she remarked that Roman Polanski was not guilty of “rape-rape,” a comment which she later clarified. Goldberg also initially defended Bill Cosby as he faced sexual assault accusations, a position she ultimately reversed.
Story By CNN
Whoopi Goldberg
Leave A Comment
Cancel Reply
You might also like
Entertainment