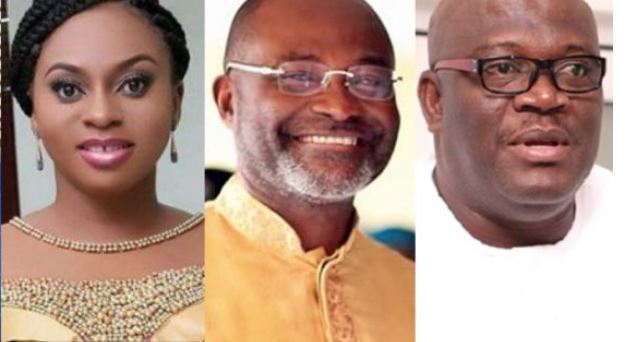 Parliament’s Privileges Committee is set to begin the hearing on absenteeism by some legislators on 26 May 2022.

It will be recalled that on 5 April 2022, Speaker of Parliament, Alban Bagbin, referred three members of parliament to the Privileges Committee over absenteeism.

Notices have been reportedly served on the said MPs for the meeting which will be held in-camera.

Although the maiden edition of the committee meeting is set to start mid-afternoon on Wednesday, 25 May 2022, Ayawaso Central MP Henry Quartey will be the first legislator expected before the house on the next day.

He will be followed by Dome Kwabenya MP Adwoa Safo, who is scheduled for 27 May 2022, and Assin Central MP Kennedy Agyapong on 31 May 2022.

Wednesday’s meeting will set out the modalities of the committee’s operations.

The Ranking Member on the Committee, Ricketts Kweku Hagan, made this known in a Joy News interview monitored by theghanareport.com.

Explaining the rationale behind the dates selected, he said that “the committee got a response from the Assin Central legislator that he will be going for a medical review in the United States, hence the order in which the meeting has been arranged”.

Regarding the other two MPs, he said no official letter had been written to the Clerk informing the committee of their individual challenges.

“I expect that the two MPs are aware of what is going on, so they have no reason to be absent,” he added.

Responding to what happens if any MP fails to appear before the committee, he said the said MP would be in contempt of Parliament.

“You are further complicating your situation because we are here to obey the constitution and follow what the Speaker says. As a member of Parliament, we should know better, and this is a very serious matter which has to do with you.

“I don’t think it was easy for any of them to become an MP. You are here to serve your people, so there is a need to come here and explain yourself. It’s possible for one to be indisposed, but all those must be communicated,”

It will be recalled that a former Member of Parliament for Kumbungu, Ras Mubarak, petitioned the Speaker over absenteeism on the part of some legislators sometime in March 2022.

He said the MPs had flouted provisions of Article 97 (1) (c) of the Constitution and Parliament’s Standing Order 16 (1), which frowns on members absenting themselves for 15 sitting days without permission from the Speaker.

Per Article 97(1)(c) of the 1992 Constitution, a Member of Parliament shall vacate his seat “if he is absent, without the permission in writing of the Speaker, and he is unable to offer a reasonable explanation to the Parliamentary Committee on Privileges from fifteen sittings of a meeting of Parliament during any period that Parliament has been summoned to meet and continues to meet.”