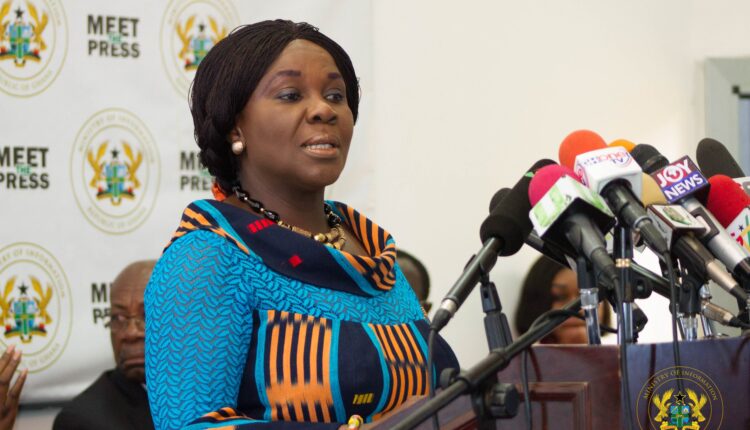 Sanitation Minister-designate, Cecilia Abena Dapaah, is hopeful of making Accra the cleanest city in Africa after missing the mark in Akufo-Addo’s first tenure.

“Mr Chairman, Accra is on course to become the cleanest city that the President gave in absolute terms,” She responded when she appeared before the Appointments Committee of Parliament.

Data from the Accra Metropolitan Assembly indicates that the city generates more than 3,000 tonnes of waste, but about 2,700 tonnes is collected.

With less than a quarter of the city’s waste recycled, there is pressure on the various metropolitan and municipal authorities to find a lasting solution to the problem.

MP for Bodi, Sampson Ahi, had wanted an update on the sanitation promise from the nominee, who  has been re-nominated for the same office.

President Akufo-Addo wants to maintain her for his second government, and she stated on Tuesday that tackling sanitation was “a process which would take time”.

The MP said the pictures were snapped earlier on the same day before the vetting commenced.

The minister-designate did not dispute the situation but explained that the ministry’s monitoring teams usually tackle such matters with the assemblies.

She called on the public to be responsible to make the promise a reality.

“I will give it (cleanest city agenda) 85% because, at the end of the day, you all saw the 100% we gained during the lockdown. So who makes Accra dirty? That’s why we are sensitising people every day,” she explained.

What is being done to address poor sanitation?

Over 20,000 litter bins have been distributed across the country to various Metropolitan, Municipal and District Assemblies (MMDAs).

Through the Greater Accra Metropolitan Area Sanitation and Water Project (GAMA-SWP), close to 33,000 household toilets have been provided to tackle human waste.

She cited projects that are yet to commence to tackle dump sites and drains, such as the Odaw River, which overflows to cause solid waste.

Additionally, she said a project for vulnerable and unplanned settlements would also provide 5,000 toilets.

Her plans include a Sanitation Authority to deal with the challenge and a Sanitation Fund to finance sanitation projects.

What was the promise by President Akufo-Addo?

President Nana Akufo-Addo, in April 2017, promised to make Accra the cleanest city in Africa by the end of his tenure in office.

The promise came in the face of a worsening sanitation crisis in the nation’s capital, Accra, with city authorities struggling to deal with the situation.

A section of the public, including some experts, cast doubt on the agenda, saying it was impossible to achieve it by the end of 2020.

In April 2019, the Sanitation minister made a U-turn on the deadline for achieving the cleanest city agenda.