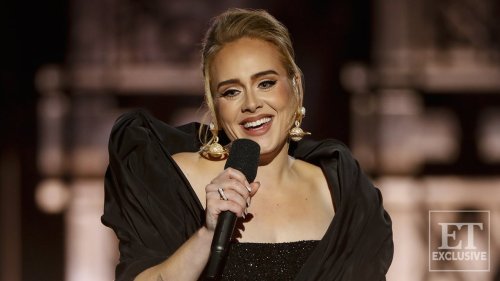 Adele Bursts into Tears Onstage During Reunion with Former Teacher

Adele broke down in tears when she was surprised by a special teacher from her past.

During her ITV concert special An Audience with Adele at the London Palladium earlier this month, Dame Emma Thompson asked the “Easy on Me” singer, 33, if there was anyone from her childhood who left a lasting impression on her growing up.

Adele revealed her English teacher at Chestnut Grove, Ms. McDonald, inspired her when she was younger.

“She was so bloody cool. So engaging. She really made us care and we knew that she cared about us,” the Grammy winner said. She added that McDonald was “so relatable and likeable that I really looked forward to my English lessons.”

Thompson, 60, then revealed the beloved teacher was sitting in the audience, which prompted a shocked Adele to burst into tears and welcome her to the stage.

“I’m so proud of you,” McDonald said as the pair embraced.

We all have that one teacher who changed our life… such a beautiful reunion! ❤️

“I didn’t know that you were coming,” Adele said.

“That’s okay. It was supposed to be a surprise,” McDonald responded. “Thank you for remembering me.”

“You really did change my life,” Adele replied. “Now, I’ve got to get my whole face re-done,” she joked while wiping away tears.

The music superstar also shared her excitement over the reunion on Instagram.

“Home Sweet Home. I’ve always dreamt of doing An Audience With… There was so much love in the room for eachother [sic], it felt like such a gig! Everyone was raucous and bang up for it! And my teacher Ms McDonald was there, it was just heaven ♥️,” she captioned the post, which featured a series photos from the star-studded event.

Adele made her relationship with Paul, 39, Instagram official in September after months of speculation surrounding their dating status. A source told PEOPLE in July that the two had been dating for a “few months.”

In an interview with Vogue last month, the award-winning singer revealed that she and Paul started dating at the beginning of 2021 after meeting at a party two years ago. Following her divorce from ex-husband Simon Konecki, Adele said she knew exactly what she wanted in a partner as a “33-year-old divorced mother of a son, who’s actually in charge.”

“The last thing I need is someone who doesn’t know where they’re at, or what they want. I know what I want,” she explained. “And I really know what I don’t want.”