Afia Schwarzenegger Humbled As She Apologizes To Court

Socialite Valentina Nana Agyeiwaa, popularly known as Queen Afia Schwarzenegger, has rendered an unqualified apology to the Tema High Court for her misconduct on United Showbiz which led to a 10-day jail sentence.

Afia Schwarzenegger, with her legal team on Tuesday, December 20, 2022, appeared before the Tema High Court for the first time as a sign of respect to the judiciary based on the judgement placed on her in her absence.

The controversial celebrity, with her lawyers, presented an apology letter to the court seeking forgiveness.

In the letter, Afia apologised to the court and the entire public for her comments on the United Showbiz on UTV.

According to her, “the discussion on the show had the tendency of bringing the authority of the court into question, and upon sober reflection, I unreservedly apologise for my actions and conduct and any role I played in the events that ensued on that programme”.

Afia also pledged to uphold moral standards in society as a result of the judgement imposed on her for defamation.

“I will always from hereon endeavour, to conduct my affairs in a manner that will not cause public disaffection nor seek to undermine the Courts of our land. As I said on that fateful day, I respect our courts and their authority, and I urge my fans, sympathisers, and followers to learn the right lessons from all that has transpired”.

Afia, therefore, appealed to the court to accept her apology as she promised not to tarnish the image of any prominent individual in the country henceforth.

“I pray that the honourable court shall accept this my sincere apology. I state once again that I believe and trust in the authority of our courts to deliver justice where it is due, and I shall continue to trust that the matter will be adjudicated fairly and justly,” she noted. 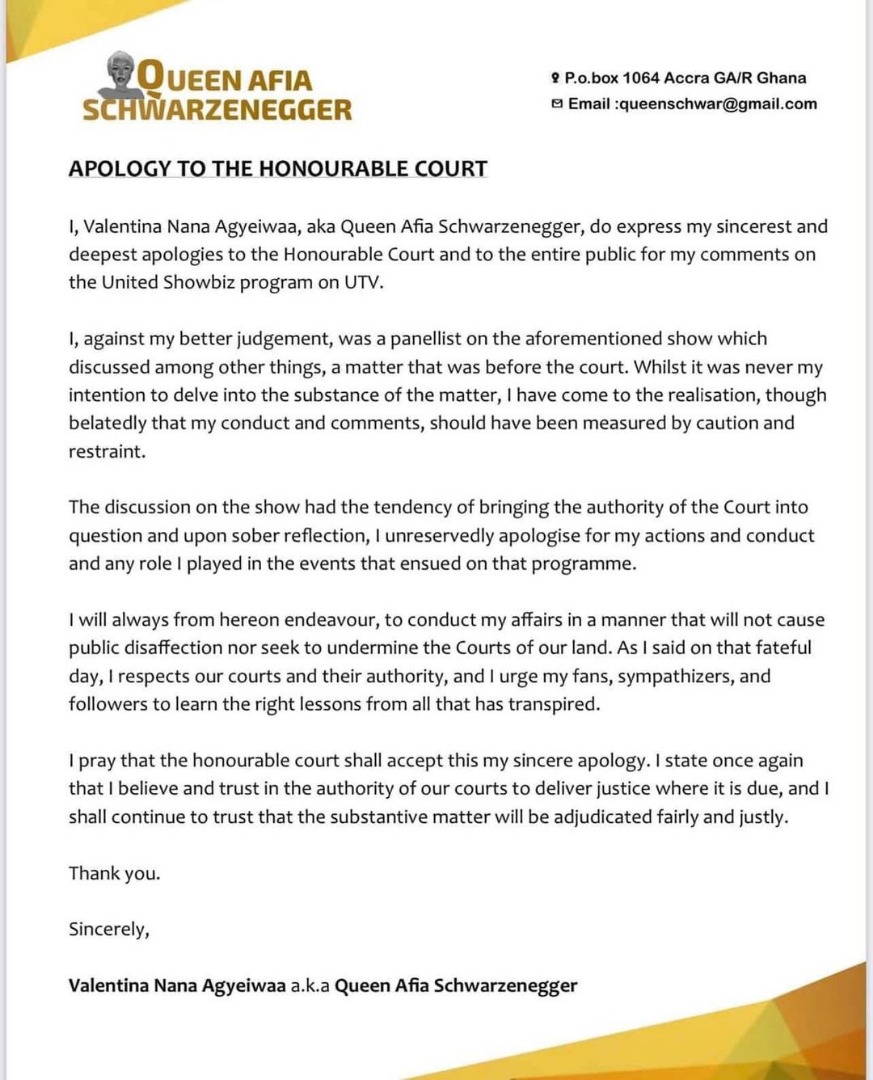 Meanwhile, the Tema High Court has adjourned the case of Afia Schwarzenegger to January 17, 2023, whereby the court will pronounce a final judgment on her.

It will be recalled that Afia Schwarzenegger, on December 1, 2022, was sentenced to 10 days in prison as a result of defamation against Bernard Antwi Boasiako, also known as Chairman Wontumi.

According to Chairman Wontumi, Afia Schwarzenegger made some false sexual allegations against him on United Showbiz, an entertainment show hosted by Felicity Nana Ama Agyeman, aka Empress Nana Ama Mcbrown, on UTV.

Afia Schwarzenegger was sentenced to 10 days imprisonment while the other accomplices were fined GH¢60,000 each (5,000 penalty units).