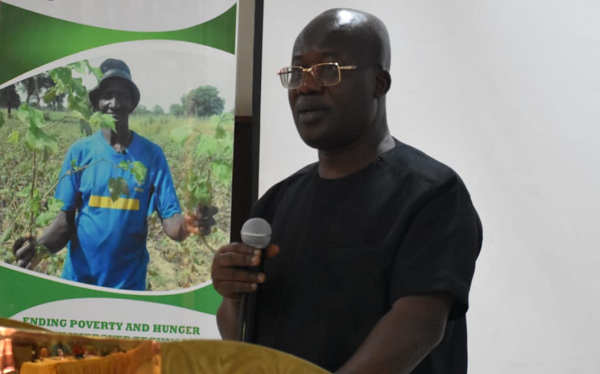 Ghanaian plant geneticist and founding director of the West Africa Centre for Crop Improvement (WACCI) of the University of Ghana, Professor Eric Yirenkyi Danquah, says smallholder farmers in Africa need access to biotech crops more than farmers anywhere else in the world.

For him, the time has come for African governments to use available data on biotech solutions to take decisions that would improve livelihoods and lift millions out of extreme hunger and poverty in Africa.

He expressed the concern that “anti-GMO activism has stalled the adoption of genetically engineered crops in many countries, contributing to the perpetuation of unsafe pesticide use, hunger and poverty.”

The workshop, dubbed “Speaking Science Ghana” and organised by Alliance for Science, a science communication initiative, was intended to equip the participants with effective communication skills that they can use in sensitising the public about genetically modified organisms (GMOs) and agricultural biotechnology.

The workshop also aimed at equipping participants with the best skills in using the media to communicate about science, including opinion pieces writing, giving media interviews, and the use of digital media tools.

Alliance for Science is a science communication initiative that is working to promote science globally, whilst countering misinformation on scientific innovations and science issues like GMOs, gene editing, COVID-19 and climate change.

Prof. Danquah said currently, only seven countries in Africa had approved GMOs, stressing that GMOs were under various stages of development in 11 other African countries, including Ghana.

He was of the view that “there is an urgent need for more food to be produced on less land with less chemicals,” saying “the development of improved varieties of our staple crops with high yields and resistance to the physical and biological stresses is absolutely necessary for a green revolution and food self-sufficiency in Ghana.”

He explained that science-based agriculture could preserve critical indigenous foods such as cowpea, millet, cassava, and sorghum, while reducing the environmental impacts of farming.

Prof. Danquah said “on average, genetically engineered crops have cut chemical pesticide use by 37 per cent, increased crop yields by two per cent, boosted farmer profit by 38 per cent, and reduced greenhouse gas emissions equivalent to taking 12 million cars off the road.”

He argued that farmers across the globe were struggling with devastating impacts of climate change, pointing out that disrupted rainfall pattern, drought, extreme weather events, pest infestations, plant diseases, crops losses, and hunger had made it necessary for African governments to adopt biotech solutions such as the GMO crops.

Prof. Danquah has therefore called for the integration of the rapidly evolving tools of modern biotechnology including genome editing into crop improvement programmes to make agriculture “in Ghana more productive and sustainable.”

He also called on the government to give farmers in the country a free choice to select and adopt crops developed through modern science in plant breeding including the GM technology, saying “Ghana needs a comprehensive science policy that puts science on the top of the agricultural transformation agenda.”

He noted that biotech solutions and innovations enable scientists to be able to solve agricultural problems that conventional farming methods were unable to do, saying “This can be achieved with precision and efficiency using plant biotechnologies and genomics as important tools.”

He also expressed concern about the growing misinformation on GMO crops in the country, saying “It is 27 years since the first GMOs were released and I am not aware of a single credible food or feed problem on the safety of GMOs.”

In addition, he noted, “There is a very strong scientific consensus globally on GMOs just as scientists are on climate change.”

For Prof. Danquah, it was worrying that in spite of the fact that scientific official reports on the safety and benefits of GMOs had been published by the World