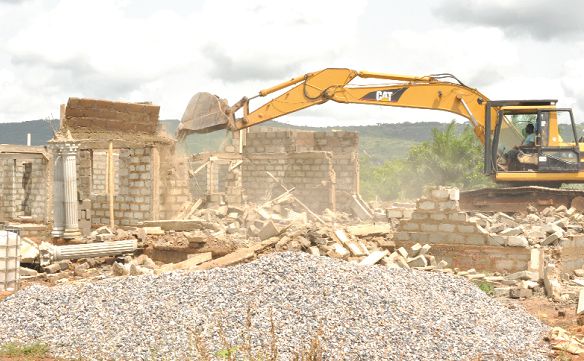 Agric Ministry pulls down structures to reclaim land at Danfa

The Ministry of Food and Agriculture (MoFA) has carried out a demolition exercise to reclaim land belonging to it at Danfa in Accra.

Yesterday’s exercise saw the pulling down of over 100 structures, most of which were below lentil level and at the foundation stage.

The land, which measures a little over 255 hectares (630 acres), currently houses the Amrahia Dairy Farm and also serves as grazing fields for cattle on the farm. More than 100 policemen, drawn from the Accra Regional Police Command, supervised the exercise, which lasted close to five hours.

Led by the Accra Regional Director of Operations, Assistant Commissioner of Police Mr Kwesi Ofori, the police ensured the smooth execution of the exercise, although there were initial protests by some youth of the community.

Subsequently, the police arrested two persons for obstruction. They were later cautioned and discharged.

During the exercise, the team encountered five persons who had gone there to buy a piece of land. However, the police could not arrest those selling the land because they took to their heels on sighting the police.

One of the potential buyers, who spoke to the Daily Graphic on condition of anonymity, said a plot of land was being sold at GH¢15,000.

Some of the affected persons who saw the exercise being carried out could not hide their shock as their structures were brought down. While some of them looked on helplessly, others wailed and pleaded for mercy.

One of the victims, who gave his name as James Prempeh, said the land was sold to him at GH¢25,000 by a chief whose name he gave as Nii Afro.

After the exercise, the Press Secretary to the Minister of Food and Agriculture, Mr Issah Ridwan Alhassan, said the ministry was on a warpath to reclaim its lands that had been encroached on.

That, he said, had become necessary after several warnings issued to encroachers to vacate the land had fallen on deaf ears.

The exercise, according to him, was aimed at using the encroached lands for the original purpose for which they were acquired.

That included the establishment of demonstration farms, as well as developing portions into research demonstration plots for the development of the agricultural sector, he said.

Additionally, the exercise formed part of moves to meet the accommodation needs of staff of the ministry and the public through the construction of affordable housing units, he added.

Mr Alhassan pointed out that the ministry was, by that exercise, sending out a strong caution to groups and individuals selling or buying government land, especially those belonging to MoFA, to desist from the act or face the full rigours of the law.

The ministry, last year, carried out a similar exercise, which saw the destruction of over 100 structures at Borteyman, a suburb of Nungua, near Accra.

For his part, Mr Ofori said the police were there to ensure that lives and property were protected, especially those belonging to the ministry.

He sent a word of caution to land guards to desist from their activities or face the wrath of the law.

“We will ensure that lives and property are protected at all times,” he said.