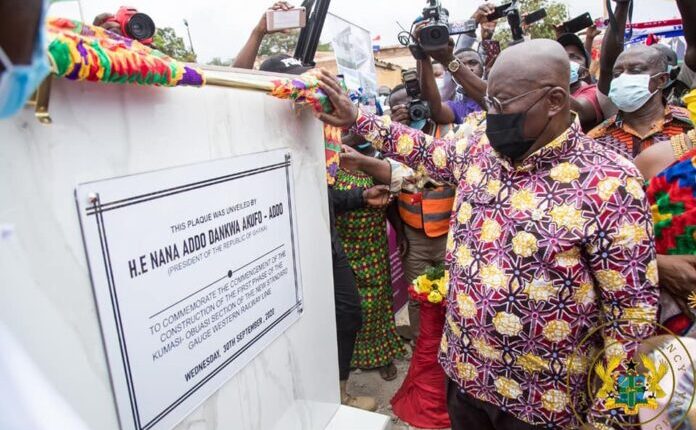 On October 2, 2020, 9:50 AM
Share
President Akufo-Addo has cut the sod for work to commence on the 83.5-kilometer standard gauge railway line from Kumasi to Obuasi, as part of the new Western Line being constructed.
Speaking at the sod-cutting ceremony, President Akufo-Addo noted that, as of January 2017, out of the 947 kilometres of colonial narrow-gauge rail network bequeathed to the country by the colonialists, barely 10% was operational.
He stated that apart from the 15-kilometer narrow-gauge railway line built between 2012 and 2017, from Sekondi to Takoradi via Kojokrom, no kilometer of railway line had been added.
“Upon my assumption of office, I was determined to change this statistic, because I believed that the presence of an efficient, effective railway system was critical to the progress, prosperity, and development of our nation.
“This led me to the decision to establish the Ministry of Railways Development, with the dynamic Hon. Joe Ghartey, Member of Parliament for Essikadu Ketan at the helm of affairs. By all accounts, this has started yielding fruits,” the President said.
He continued, “Today’s event, the cutting of the sod for the construction of the 83.5km Kumasi to Obuasi line, is a clear manifestation of the Akufo-Addo Government’s policy to grow and develop the country’s railway sector.”
It will be recalled that earlier this year, both Cabinet and Parliament approved a €500 million agreement for the construction of a new standard gauge line from Takoradi Harbour to Kojokrom, and also from Manso to Huni Valley.
Once this is completed, 102km of new standard-gauge railway lines would have been constructed, as part of the development of a new standard-gauge Western Line.
President Akufo-Addo explained that the Western Line is critical to the successful establishment of the new bauxite and aluminium industry being promoted by Government.
The Sheini and Oppon Manso iron ore deposits, which will form the basis of the imminent iron and steel industry, according to the President, require a modern railway network to transport the ore and the processed raw material.
Additionally, President Akufo-Addo told the gathering that work is also progressing steadily on the Tema to Mpakadan Line, which is the first phase of the Tema to Paga section of the Ghana-Burkina Railway Interconnectivity Project.
“This railway line has branch lines to Sheini and Oppon Manso. The exploitation of the bauxite deposits at Atiwa, as part of the nascent bauxite and aluminum industry, will also benefit from the construction of a new railway line,” he added.
With the imminent commencement of construction of the Boankra Inland Port, following the approval by Parliament of a $300 million concession facility, the President stated that, since 1995, the country has been grappling with the development of the inland port.
The economic viability of the Boankra Inland Project, he stressed, will be greatly enhanced by the presence of a railway line, adding that “a new standard gauge railway line from Accra to Tema to Kumasi is a must, and I expect contracts to be signed for the commencement of the construction of a line from Accra to Tema towards Kumasi before the December elections.”
With the country’s railway network having never gone beyond Kumasi, the President announced that a feasibility study and the preliminary design of a new standard gauge line, from Eduabin to Paga through Bechem, Sunyani, Techiman, and Tamale, has been completed.
“Next week, final stakeholder holder consultations will commence, after which the processes for land acquisition will begin. Let me take the opportunity to appeal to the chiefs, who are the custodians of our land, to give their full support to this project. The economic value of all lands, where there is development of the railway line, will be greatly enhanced,” he added.
In the first four years of his administration, President Akufo-Addo noted that more construction activity in the railway sector has gone on than in any period of the country’s history since independence.
“Over the last three years and ten months we have laid a solid foundation, which will receive an even greater impetus when Nana and the NPP get four more years to do more for you. My commitment to the development of a new modern standard railway network is unwavering,” he assured.
Story By Sefanam Agbobli / info@theghanareport.com
Kumasi-Obuasi railway lineNana Addo Dankwa Akufo-AddoSod-cutting
Leave A Comment
Cancel Reply
You might also like
News