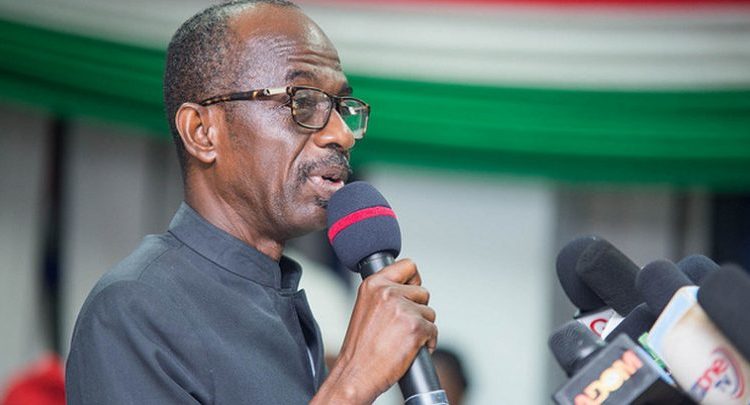 His outburst follows the Vice President, Dr Mahamudu Bawumia’s, assurances that the Akufo-Addo government would restore 100 per cent of locked-up funds, once they have been verified.

Speaking at the government Townhall meeting , at the Kwame Nkrumah University of Science and Technology (KNUST), on Tuesday Dr Bawumia had said the government would secure the funds and pay up the victims of DKM.

In 2015, depositors lost part of their investments after the Bank of Ghana(BoG) suspended the DKM operations.

But barely 48 hours after Dr Bawumia’s assurance, the NDC’s General Secretary in an interview on Neat FM, maintained that the Akufo-Addo government could not  settle the  debts.

“What they can is what they can pay, it is only part of the DKM debts that they have been able to pay a small flat rate to some depositors. The majority of the depositors have still not been paid, ” he said in Twi.

“And you want to come back for another four years. How will you be able to pay these depositors?

“Or you think depositors wash their faces upwards instead of downwards, ” he said the proverb in Twi,” he quizzed.

Reacting to the Vice- President’s statement, Spokesperson for the affected DKM customers, James Sarpong, in an interview said “this is a political talk.”

“Since we have a few months left to the election period so they just want to make promises. NPP government has been lying to us for the past three years now, ” he stressed.

He recounted months before the 2016 elections when the NPP government had promised to settle all debts owed DKM customers.

“They came to stand at the Sunyani town and told us that when voted into power they would settle all the arrears. Anywhere the money is, we will get the money.”

“It’s that time again so the Vice President wants to lie to us again. They should continue lying to us, ” he reiterated.