The decision is in accordance with Article 72 (1) of the Constitution and its beneficiaries include sick convicts.

The categories of prisoners released in Ghana are the aged, first-time offenders, and inmates who have served half of their sentences.

“The first-time offenders totalling 783 who have served half of their sentences, 11 seriously ill prisoners and three aged (very old) prisoners are to be released outright.” a statement signed by the Director of Prisons, Patrick Darko Missah, said. 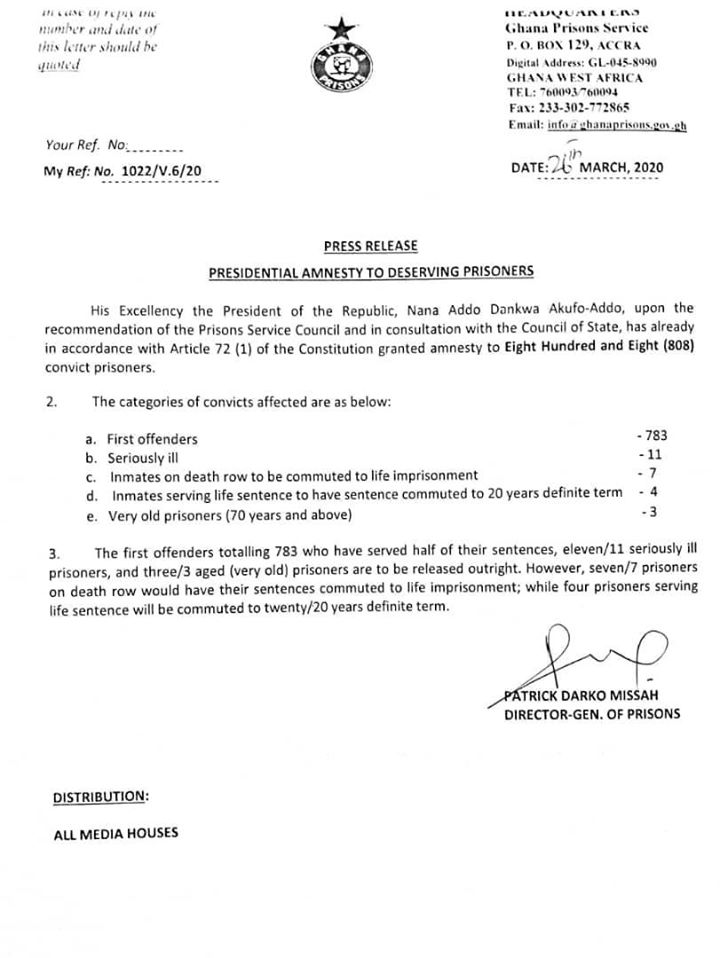 What is happening elsewhere

With the advent of the deadly novel coronavirus, governments across the world are either considering releasing inmates or releasing them in a bid to congest prisons to curb the spread of the virus.

Iran has temporarily released more than 54,000 prisoners in an effort to combat the spread of the new coronavirus disease in crowded jails.

Turkey, according to its Justice Minister, Abdulhamit Gul,  was mulling legislation that would free some of its 300,000 detainees.

UN High Commissioner for Human Rights, Michelle Bachelet, in a statement, urged countries to protect people in detention from the COVID-19 pandemic by releasing vulnerable prisoners.

“Covid-19 has begun to strike prisons, jails and immigration detention centres, as well as residential care homes and psychiatric hospitals, and risks rampaging through such institutions’ extremely vulnerable populations,” a statement signed and issued by the Director-General of Prisons, Patrick

“Authorities should examine ways to release those particularly vulnerable to COVID-19, among them older detainees and those who are sick, as well as low-risk offenders.”

According to her, detention facilities in many countries were severely overcrowded, making detainees and staff particularly vulnerable to catching the deadly new coronavirus.

“People are often held in unhygienic conditions and health services are inadequate or even non-existent. Physical distancing and self-isolation in such conditions are practically impossible,” she noted.

Ms Bachelet recognised that governments were currently facing huge demands on resources, but urged them “not to forget those behind bars, or those confined in places such as closed mental health facilities, nursing homes and orphanages”.

“The consequences of neglecting them are potentially catastrophic,” she warned.