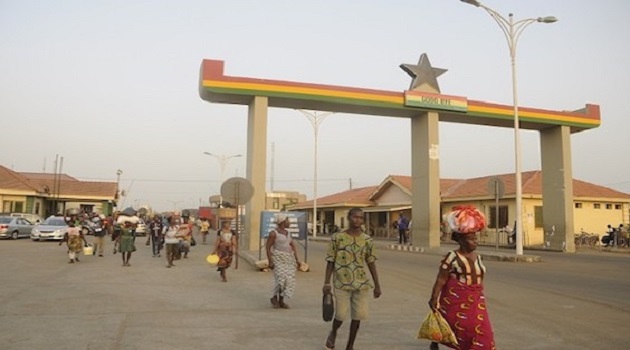 President Nana Akufo-Addo has ordered all borders in the country to be opened for travellers after a reduction in COVID-19 cases,

Ghana’s borders were closed in March 2020 when the country recorded its first cases of  COVID-19.

The decision was part of efforts to prevent the spread of the novel virus, but cargo was allowed into the country.

In his latest COVID-19 address on Sunday, 27 March 2022, in relation to measures taken by the government to address the pandemic, President Akufo-Addo said:

“As from tomorrow, Monday, 28 March, all land and sea borders will be opened”.

According to him, “Fully vaccinated travellers will be allowed entry through the land and sea borders without a negative PCR test result from the country of origin”.

However, “Citizens and foreign residents in Ghana, who are not fully vaccinated, will have to produce a negative 48-hour PCR test result, and will be offered vaccination on arrival”.

He observed that it had been a difficult two years for Ghanaians, but “we are seeing light at the end of a very long tunnel”.

He, thus, appealed to the public “to live responsibly, protect ourselves at all times, and do everything we can to stay safe, as we lift these restrictions”.

“Now is the time for all of us to join hands, work hard, and help put our nation back onto the path of progress and prosperity as we resume full production and increase productivity.

“As your President, I assure you that, sooner rather than later, our economy will rebound from the ravages of COVID-19. The policies we are implementing will, with your active support, help grow the economy at a much faster rate, help create jobs for the youth, and help us overcome the difficulties we are faced with,” he assured.

The announcement would be a relief to people who have been clamouring for all land borders to be open.

The Minority in Parliament had said that there was no justification for Ghana’s borders to remain shut.

They insisted that the government take immediate action to open the borders to facilitate the free flow of people, goods, and services within ECOWAS and the rest of the world.

Ghana’s land borders were closed in March 2020 when the country recorded its first cases of  Covid-19.

“Post-Covid, we are not out of the woods yet, but we want to see a return to normalcy with the movement of goods and services to our borders and, therefore, whatever proactive measures government needs to take there can be no justification for the continued closure of Ghana’s land borders,” Minority Leader, Haruna Iddrisu, told the press in parliament about two weeks prior to the President’s announcement.

“As a minority, our primary concern is to call on the president as chair of ECOWAS to do that which is needful to give meaning to the resolution he so chaired for ECOWAS to pass to allow and facilitate the free movement of goods and services between us, our neighbours and the rest of the world”.

Several MPs and other bodies had also entreated the government to take a second look at the border closures.

MP for North Tongu, Samul Okudzeto Ablakwa, said in October last year that the situation presented a tough time for people, particularly along border towns who survive on having to cross the border as well as Ghanaian businessmen and women who cannot afford to travel by air but necessarily have to trade with counterparts in neighbouring countries.

He argued that as of 31 July 2021, all West African States except Ghana had opened their land borders for trade and movement, among others.

Several traders who were clad in red marched through the principal streets at Elubo in September 2021 to press home their demands. 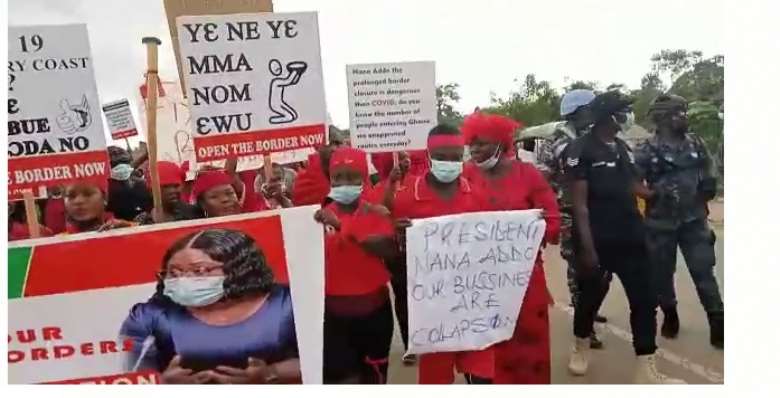 According to Ms Afo Toffey, “More people have died in the area due to hardships as a result of the border closure than the COVID-19 pandemic. We are pleading with the government, President Nana Akufo-Addo, to intervene”.

Presenting their petition to the Municipal Chief Executive of Jomoro, the group drew attention to the ECOWAS meeting held on 23 January 2021 chaired by President Akufo-Addo, which agreed to allow free movement of persons.

The demonstrators appealed to the President to therefore allow “free movement of persons just as our neighbouring countries Togo, Côte d’Ivoire and Burkina Faso have done with regard to the decision made at the 58th Meeting of the ECOWAS Heads of States on 23 January 2021 which was chaired by President Akufo-Addo.”

On 27 August, some aggrieved residents of Aflao also thronged major streets in the Volta Region to protest the continuous closure of the border between Ghana and Togo.

The demonstrators who were clad in red and black attire were seen holding placards with inscriptions such as “Mie Fu Kpem”, meaning “we are suffering”, as they chanted war songs on Friday, 27 August.

Residents in the Ketu South Municipality had one request: for the government to open the Aflao border to allow traders to go about their activities openly.