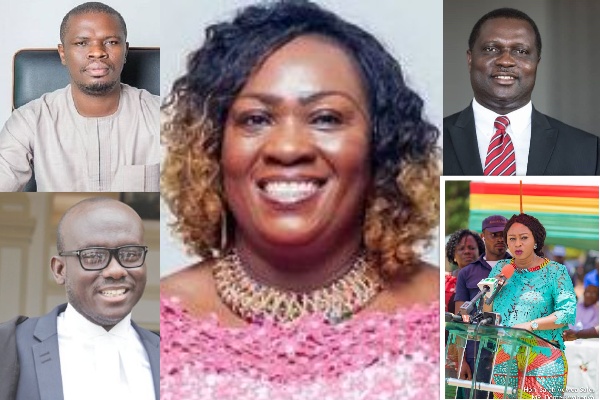 President Nana Akufo-Addo has released a list of persons appointed for the various ministerial position for vetting by parliaments.

The list forwarded to parliament on Thursday, January 21, contains a mixture of some old hands and notable new faces.

There are 27 sector ministers and 16 regional ministers in total.

Some of the fresh faces include Samuel Abu Jinapor, Francis Asenso-Boakye, both former Deputy Chiefs of Staff in President Akufo-Addo’s first term, who are now Members of Parliament.

Youth and Sports Minister Isaac Kwame Asiamah has been shown the exit with Mustapha Ussif, a former Director of the National Service Scheme taking over.

The list is dominated by Members of Parliament in accordance with the constitutional requirement that demands the majority of ministers to be selected from the legislature.

Seventeen of the ministers are MPs with two regional ministers being lawmakers.

In a show of confidence in some of the men and women who worked in his first term, President Akufo-Addo renominated at least 25 ministers for another tenure.

He also elevated former at least five deputy ministers to the positions of substantive ministers.

Mr Dame became the poster for the government’s court cases, many of which he successfully won.

In the case of Dr Adutwum, he is celebrated for the double-track system which helped create room for thousands of qualified Senior High School students who would not have been able to go to school due to infrastructure challenges.

This was due to an increase in enrolment after the implementation of the Free Senior High School policy from September 2017.

Henry Quartey who was deputy minister Minister for the Interior has also been promoted to Greater Accra Regional Minister.

Before she was sent to the Ministry of Gender, Children and Social Protection as deputy minister, Freda Prempeh who a deputy minister of Works and Housing.

She makes a return to that Ministry as a Minister of State in Charge of Works and Housing.

Joseph Cudjoe, who was a deputy minister of energy has also be pushed up as a Minister of State in Charge of Public Enterprises.

For the first time in Ghana’s history, a Finance Minister has been renominated.

Since 1993, no Finance Minister has served in office for the full two terms of a President but Mr Ofori-Atta, an investment banker, has broken that jinx.

Although Professor Kwesi Botchwey served as Finance Minister for 13 years nonstop, a greater part of those years was under a military regime. Under the Fourth Republic, Prof. Botchwey was only Minister of Finance between January 1993 and 1995 before he handed over to Mr Richard Kwame Peprah, who served in that capacity until January 2001.

In a turbulent West Africa sub-region, which terrorists turned into a playground, Ghana remained an oasis of peace. It appeared this might be one of the reasons the President maintained his trio of security ministers.

The Ministry of National Security, formerly headed by Albert Kan Dapaah, has the oversight responsibility to initiate and formulate policies to enhance the efficiency of the security and intelligence sector.

Mr Ambrose Dery has been maintained as Ministry for the Interior which focuses on homeland security and works closely with relevant agencies in promoting internal security.

Member of Parliament for Bimbilla and former Minister of Defence Dominic Nitiwul will keep his position for his efforts in enhancing Ghana’s peacekeeping operations abroad.

Some ministries also changed hands on the president’s list.

Sarah Adjoa Safo, a former Minister of State in Charge of Procurement moves to the Ministry of Gender, Children and Social Protection.

John Peter Amewu, who was the Energy Minister will have the arduous task of revamping the railway sector as Minister for Railway Development.

Matthew Opoku-Prempeh, who led the implementation of the government’s flagship Free Senior High School (SHS) policy is expected to take on a new role as Minister of Energy.

Dr Kwaku Afriyie who was Minister of State responsible for State Interest and Governance Authority (SIGA) will now be the Minister of Science and Technology.

Mohammed Awal moves from the collapsed  Business Development Ministry to the Ministry of Tourism, Arts and Culture.

Mavis Hawa Koomson will take over the Ministry of Fisheries and Aquaculture Development after her Ministry of Special Initiatives was added to the list of moribund institutions.