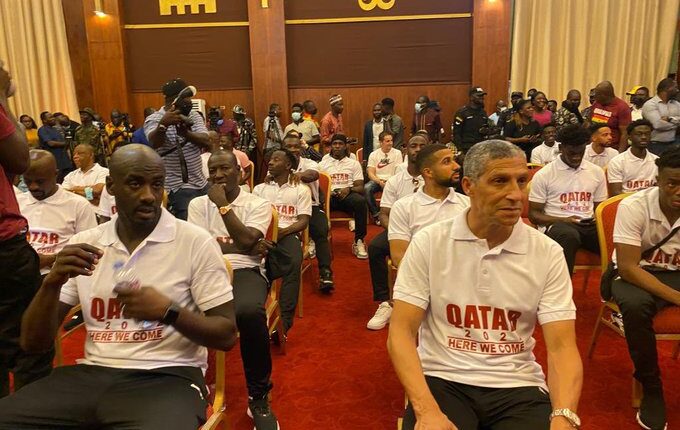 President Nana Akufo-Addo has called on the Ghana Football Association (GFA) to maintain the Black Stars technical team for the 2022 World Cup in Qatar.

He made the statement when the triumphant team paid a courtesy call on him at the Jubilee House on Wednesday afternoon.

The team visited the presidency hours after returning from Nigeria after booking a place at the upcoming tournament.

The Stars defeated the Super Eagles on an away goal rule after the match ended 1-1 in Abuja.

The entire squad led by the captain for the tie Thomas Partey and the technical team were received by the President.

Also in attendance were the GFA President Kurt Okraku and some executives from the GFA.

President Akufo-Addo, a self-confessed football fanatic, was effusive in praising the team and had special words for the technical team.

He acknowledged that this technical team was expected to be a short-term measure, but they should be given a longer mandate considering their performances.

“I’m hoping that the technical team that has been put together for these two matches will at least take us through the World Cup itself,” he said.

He added: “Mr Okraku, [do] whatever you can do to make sure the team stays together, at least until Qatar, then afterwards, we can take a long-term decision.

Ghana are in Pot 4 and awaits their group opponents in the World Cup draw, which will be held on Friday, April 1st.