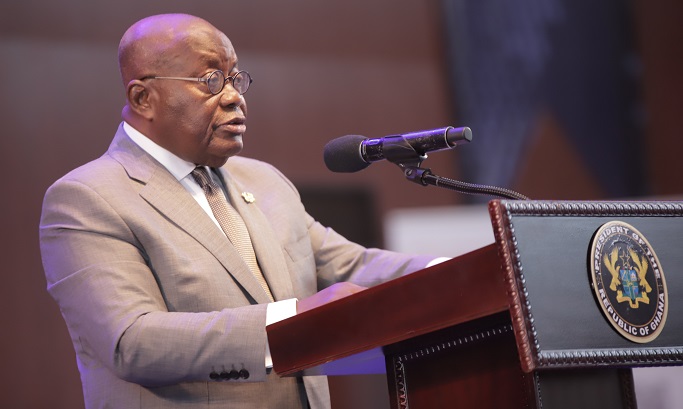 President Nana Addo Dankwa Akufo-Addo has expressed concerns over the impact the crisis in Ukraine is having on food security in the country and on the continent.

According to the President, the Ukrainian crisis has compromised the food security of Africa, causing a disruption of commodity imports and shortages in fertilizers for crops.

“Growing concerns of fertilizer shortages in most African countries including Ghana are worrying.

“Ghana’s maize and soya production could be affected and our poultry industry could suffer greater shocks,” he said at the Annual Conference of the Academy of African Business and Development at the University of Professional Studies at Legon in Accra.

President Akufo-Addo noted that the current derangement in the global commodities market, supply chains and logistics should serve as a clarion call for Africa to rise up and stand on its own feet.

He said the powerful tool to save Africa’s economies and food systems in the wake of current global challenges, was the African Continental Free Trade Area (AfCFTA) which came into effect on January 1, 2021.

“The AfCFTA, whose Secretariat is located here in Accra links 54 markets covering 1.2 billion people with a combined GDP of some three trillion United States dollars into a single market. It is the world’s largest free-trade area outside of the World Trade Organisation (WTO) itself.

“By 2050 it will cover an estimated 2.5 billion people and have over a quarter of the world’s working-age population. One in four people on the planet will be by then an African,” he said.

President Akufo-Addo stressed the need for Africans to take advantage of the opportunity the AfCFTA presented as it provided both, the impetus and catalyst for the sustainable development of the continent.

He said Africa should not be importing US$ 4 billion of agricultural products from Russia and added that 90 per cent of agricultural imports were wheat and six percent sunflower oil.

“What stops African countries like Ghana from producing and consuming its own tropical oils, like palm oil and coconut oil, and trading them with Morocco which produces wheat,” he asked.

The Minister of Education, Dr. Yaw Adutwum, said the government was committed to improving the quality of education in the country to build the next generation of great thinkers for the nation.

He said policies such the  Free Senior High School Education, aimed to give every Ghanaian child the opportunity to get the benefit of education to enable the child to contribute meaningfully to the country’s development in future.