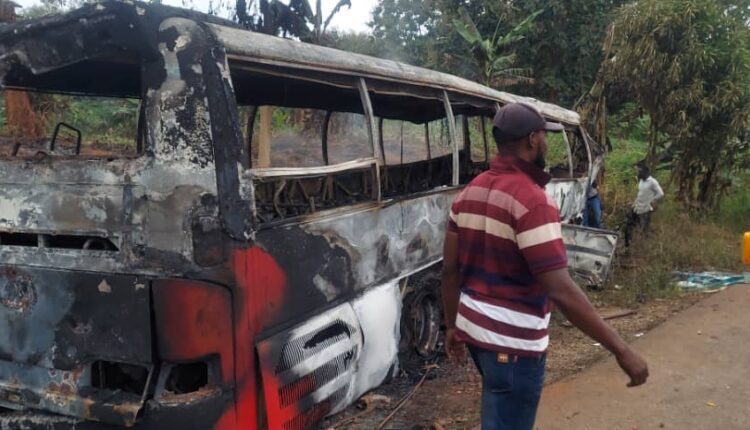 The driver in the Akumadan car accident that claimed six lives has been arrested by the police and scheduled to be prosecuted on 5 November 2021.

The driver was on top speed as he approached a police checkpoint in Akumadan, the district capital of the Offinso North in the Ashanti Region, causing the accident.

According to police initial investigations, he could not avoid a head-on collision with a stationary Kia Rhino Truck parked at the police checkpoint due to overspeeding.

“My crime officer sent a team to Ahenkro, and they brought him. He has since been detained,” he stated.

DSP Gyasi-Agyemang also said the driver required medical attention hence they are seeking treatment for him.

“He was also complaining of body pains, so I have directed that the investigator should escort him to the hospital for him to be taken care of.”

Six passengers were burnt to death in an accident on the Akumadan road a few hours after 17 lives were lost in a separate crash in the same region on November 2.

The vehicle, with about 36 passengers on board, crashed into an abandoned KIA Rhino truck at a police checkpoint in the Offinso North District.

Several others were left in critical condition and received treatment at the Akumadan Government Hospital.

One of the passengers identified only as Kwasi, who managed to escape from the vehicle before it caught fire, said the driver failed to apply the brakes because he was driving at top speed.

“The impact of the crash was great, so most of us who were sleeping woke up and started calling for help when the fire started from the front,” he narrated.

He said about 10 passengers managed to escape using the glass windows.

Road traffic fatalities seem to be rising, with 1,250 lives lost for the first five months of 2021.

On a yearly basis, data for 2020 showed that 2,589 lives were lost to road crashes across the country despite movement restrictions due to COVID-19.