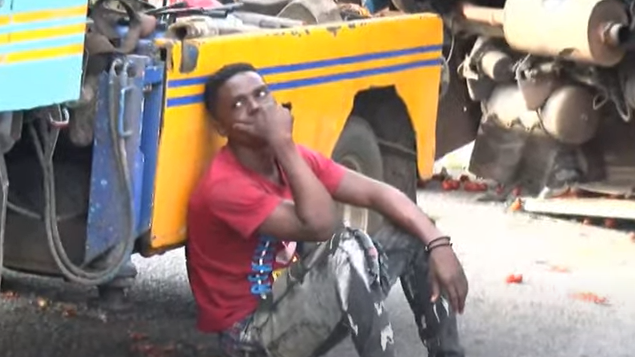 Alajo crash: I veered off to save lives – Driver recounts

A driver of a KIA Rhino truck that crashed close to the Alajo Traffic Light area in the early hours of Monday has given a riveting account of what happened minutes before the accident.

Collins Yeboah did not think much of his Monday — same road, rush hour Monday where everyone travelled in straight lines to their various destinations.

Little did he know that he would soon be faced with a dilemma.

Minutes after the accident, Yeboah, who was seen sitting pensively on the side of the Alajo road surrounded by tomatoes from his truck, said he had to save the lives of the passengers by avoiding a collision with four vehicles ahead.

“My brakes failed, and just around the time, there were about four cars ahead of m. I had a tough decision to make – either save the lives of the passengers in my truck first or crash into the cars ahead,” which would have caused greater damage.

“So, I looked at my side (driver’s side) and realised there was space beside me, so I drove close to the pavement so I could slow the truck down but still couldn’t because of the speed. Then I thought of the cars ahead. Should I hit them what will happen? Eventually, I had to overturn the vehicle to avoid any casualties.

“I was in the vehicle with my mate and the owner of the tomatoes. We were coming from Dormaa Ahenkro. We left around 8:30 pm,” he recounted. 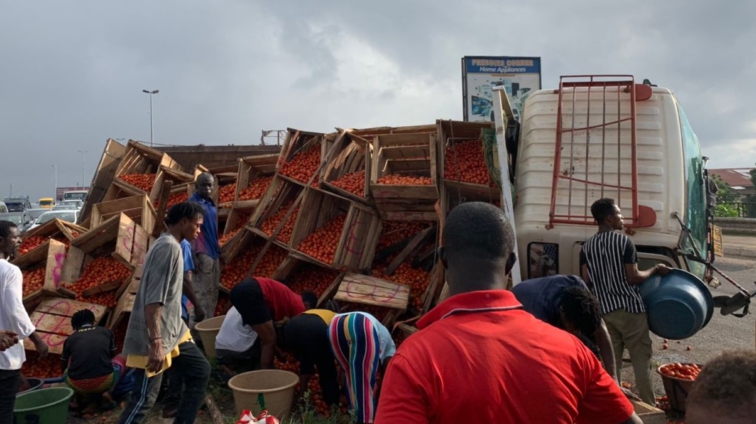 The truck emptied about 60 boxes of tomatoes, worth over GHC10K onto the road and blocked two lanes; one each on both sides of the road.

Young men were seen trying to pick what was left of the scattered tomatoes back into the boxes.

No casualty has been recorded as a result of the incident.

Meanwhile, police presence has been increased to control the traffic situation.

The police cautioned all road users to comply with the road traffic laws to avoid preventable road crashes and congestion.