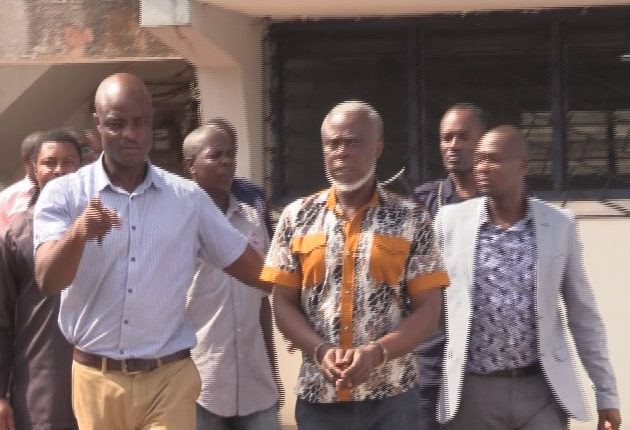 Alleged coup plot: ‘Discussions were held to kill president or compel him to announce coup’ – state

The state has urged the Kaneshie District court in Accra to commit some suspected coup plotters to trial.

The state prosecutors came to court with case boxes which they said contained evidence that the alleged plotters indeed wanted to overthrow the Akufo-Addo government.

JoyNews’ court reporter, Joseph Ackah-Blay, said the boxes were no less than 19. It contained guns, grenades and copies of documented conversations between the suspects.

According to the state, the suspects at one time held discussions on whether to kill the president, Joseph Ackah-Blay reported.

The other option was to keep him alive but compel him to announce on the airwaves that his government had been overthrown, the court presided over by Mrs Eleanor Kakra Banes Botchway heard.

The state also said it would prove that the suspects bought an equipment that could jar the systems of the National Communications Authority, which regulates media houses.

Only the state broadcaster GTV was to be sparred because it was considered strategic to the coup plotters, the reporter explained.

The group allegedly planned to kidnap the President, Nana Akfuo-Addo; his Vice-President Dr. Mahamudu Bawumia; and the Chief of Defence Staff.

The state said it planned to call 19 witnesses to testify against the suspects, who have all denied the charges leveled against them.

The accused persons are Dr Mac-Palm, a medical practitioner said to be the main mastermind; Donyo Kafui, alias Ezor, a blacksmith; and Bright Alan Debrah, a fleet manager.

The 10 individuals were accused of being members of Take Action Ghana (TAG), a group alleged to have hatched a plan to “destabilise the country and possibly take over the government”.