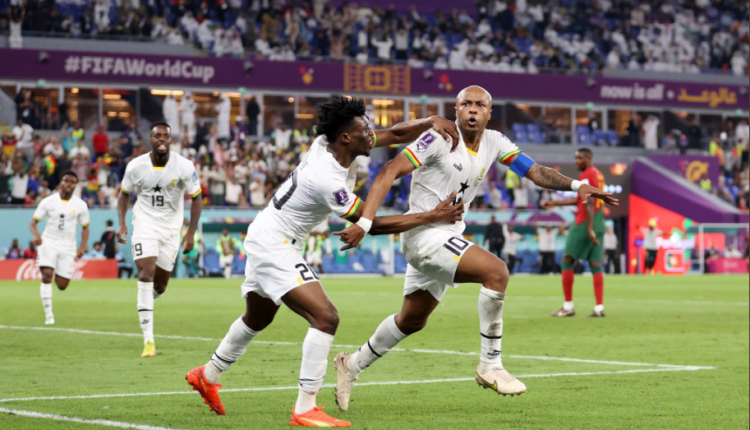 “Andre Ayew is the man for big occasion”- Asamoah Gyan

Former Ghana captain Asamoah Gyan has heaped praise on Andre Ayew saying “he is the man for the big occasion” after he scored in his country’s 3-2 defeat to Portugal in the World Cup on Thursday night.

The Al Sadd man connected beautifully from Mohammed Kudus’ cross to put the Ghanaians tied at 1-1 in the second half after Cristiano Ronaldo’s controversial penalty.

Andre has consistently stepped up to the plate on the global stage and that’s impressive given that he’s not even a forward, an attribute that excites former international teammate Asamoah Gyan.

“I think he is the man for the big occasion. [24] goals and he’s not even a center forward, I think that is impressive.” he is quoted by SuperSportTV.

Gyan, who was speaking on SuperSport as a pundit lauded the Black Stars captain despite the painful defeat.

“I have played with Andre Ayew and he is just magnificent. He is a winner and that is his character,” he said on SuperSport.

“You look at the link-up play and how patiently he scored that goal, he is just a super player,” he added.

Ayew became the first African player to score in Qatar as he continues to increase his national goal tally.

The Black Stars’ next game will be against the Asian side South Korea on Monday, and they must secure a positive result to prevent early crashing out of the tournament.