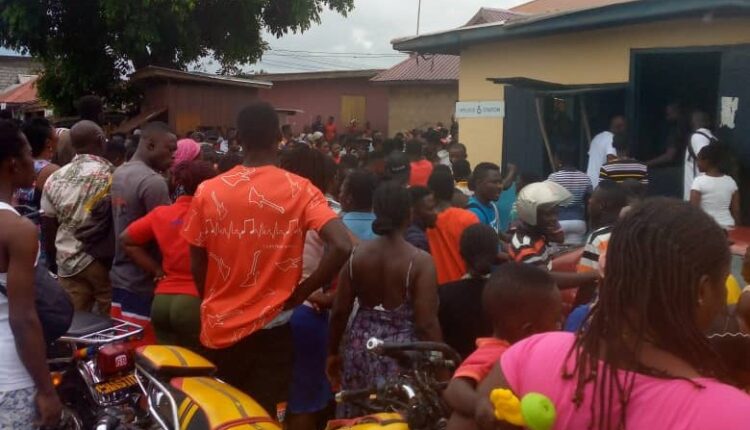 Angry residents of Akwadum in the Eastern Region stormed the police station on Wednesday, July 13, 2022, demanding to deal with two suspected kidnappers.

The two were arrested for allegedly abducting two children.

The suspects abducted two children — a 4-year-old male and a ten-year-old female from Akorabo, a farming community near Suhum, into an unregistered Toyota Camry vehicle while their parents were away. 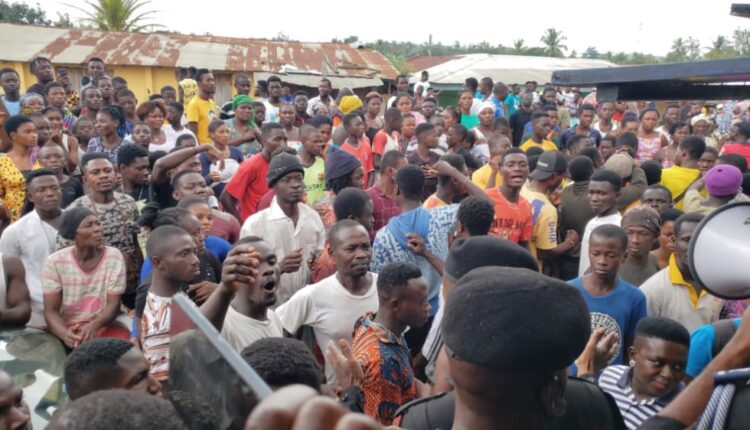 Some Okada riders who noticed the incident raised alarm and pursued the suspects but sped off.

An alarm was raised in the various communities along the Suhum to Koforidua road.

Police personnel at the Akwadum checkpoint were also on alert.

According to a witness, the suspects attempted to flee by taking the rough road from Akwadum through Subriso to Nyamekrom. However, information reached the Subriso community, the Assembly member, and some Okada riders, who blocked the suspects and assisted police in arresting and transporting them to Akwadum Police Station.

The angry residents, upon hearing the arrest, besieged the Akwadum police station and demanded the release of the suspects for instant justice. 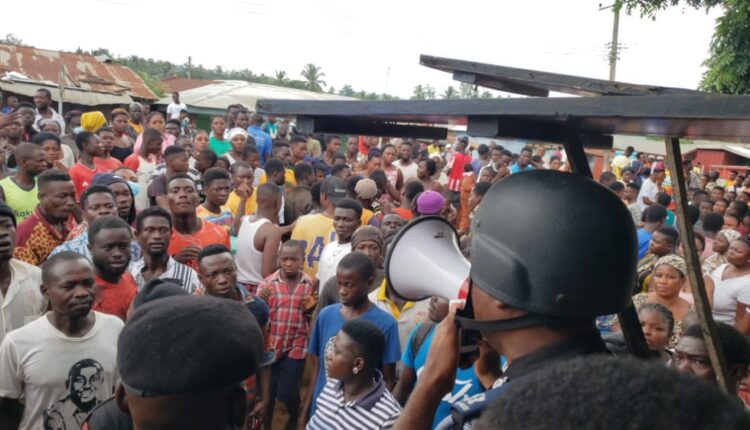 Fortunately for the suspects, were whisked from the angry mob and were transferred to the Effiduase District Police Command for further investigation.

Ghana is considered to be one of the most secure countries but the number of kidnappings has risen sharply in recent years, causing a wave of anxiety in the country.

Many Ghanaians feel the time for taking action is long overdue.

A number of cases have been recorded in recent years with some persons convicted and jailed, while others are currently on trial.

On March 26, 2022, a 26-year-old young man was arrested by the police for abducting a five-year-old girl at Walewale in the Northern East Region.

The suspect, Solomon Awunibiliga, is said to have abducted the girl from Walewale and absconded to Mirigu, a farming community in the Kasena-Nakana Municipality in the Upper East Region where he was arrested upon intelligence.

The girl is said to have gone missing two weeks ago after she went to school and did not return home.

Dr. Wilberforce Aggrey, husband of Rhodaline Amoah-Darko, the missing staff of the Lands Commission in Kumasi has been charged for her disappearance.

The police accused him of being behind the disappearance of his wife at an Asokwa District Court.

According to the police, their investigations have so far revealed a linkage of mobile phone communications to implicate the husband, who is a lecturer at the Kwame Nkrumah University of Science and Technology (KNUST) in Kumasi.

Rhodaline Amoah-Darko was reported missing after she allegedly left home at Gyenyase in Kumasi on August 30, 2021, and did not return.

Two persons were arrested by the police for an alleged kidnapping at Abeka Lapaz in Accra.

The two, Abdula Saeed and Kudjo Akorlor were arrested in their hideout.

This was after a sister of the victim (name withheld) reported the incident to the police.

According to the police, the suspects had allegedly demanded GHS1,000 from the victim’s sister through mobile money transfer and still demanded more money after their transfer had been made.

After the suspects’ second demand for money, the victim’s sister called the police who managed to arrest the suspects from their hideout and rescued the victim.

A 38-year-old driver, accused of kidnapping his two kids has appeared before an Accra Circuit Court.

The suspect Prince Osei is said to have picked up the kids after they closed from school on March 23, 2021, and failed to tell the police, the whereabouts of the two children.

The suspects promised to produce the victims on April 9, 2021.

Osei is being held on two counts of kidnapping his kids aged 11 and 7, and two counts of engaging in domestic violence to wit – conduct or behaviour that endangers the safety and well-being of another person.

He pleaded not guilty to the offence.