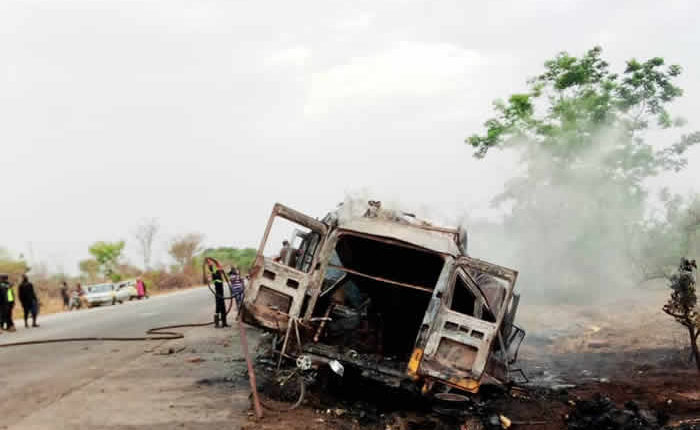 At least 26 people have died in a motor accident at Kintampo in the Bono East Region, between the Techiman to Buipe highway.

Six are in critical condition, theghanareport.com has learned.

This was after a head-on collision between a Yutong bus and a 207 Sprinter minibus in the early hours of Monday, March 9, 2020, at about 4 am.

The Yutong bus was carrying pepper from Tamale, while Sprinter was heading to Tamale. A spark resulted in a raging fire which engulfed the two vehicles. Disturbing images of charred remains have been circulating on social media.

Reporting from the scene, Adom News’ correspondent, Wiafe Akenteng, said he could count about “27 bodies that were burnt beyond recognition.”

The reporter said ambulances had been busy conveying the dead, and the injured to hospitals.

Personnel from the Ghana National Fire Service (GNFS), who arrived at the scene, made frantic efforts to separate the two vehicles in their search for victims.

Monday’s tragedy comes close to the first anniversary of a similar carnage in March 2019 in which 67 people perished.

It was another head-on collision between a Grandbird bus and a VIP bus. Some 35 bodies were charred beyond recognition. The two buses had 108 passengers on board.

Many more deaths have been recorded on the  Kintampo Road since the tragedy, despite promises by state institutions to stem the fatal tides.

The incident on the Kintampo road became the third in three months, with the most recent one reported in February 2020.

Since the publication of the story, the death toll has increased to 30.

22 February 2020: Two women and a pregnant mother died on the Kintampo road when the vehicle they were travelling on crashed into a cargo truck carrying logs.

7 January 2020: Four family members died in an accident, involving a Mercedes Benz and a Yutong bus in the Kintampo Municipality. The 65-year-old driver and his newly married wife, son and brother died instantly.

4 November 2019; A two-year-old girl and a man, identified only as Michael, were killed in an accident in the Kintampo South District of the Bono East Region.

13 September 2019: Another gory accident on the Techiman-Kintampo highway at Tuobodom in the Bono East region claimed eight lives.