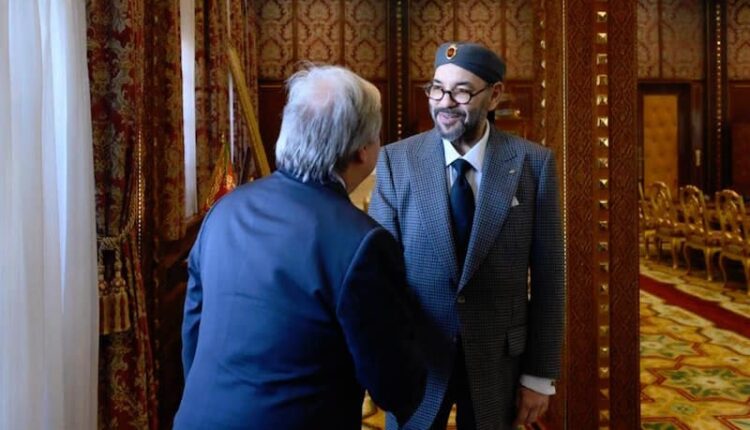 Antonio Guterres, the United Nations Secretary-General, has paid a working visit to the Kingdom of Morocco at which he called on the Monarch, King Mohammed VI in the capital, Rabat. The UN Chief commended Morocco for hosting the 9th Alliance of Civilizations held in the Moroccan city of Fez and welcomed the adoption of a strong and binding declaration, more necessary than ever in a ”troubled international context.”

He singled out for mention, the King of Morocco for his permanent commitment to the promotion of values of openness, transparency, respect, tolerance, and dialogue in the settlement of differences.

Mr. Guterres also praised Morocco for its constructive and constant contribution toward the maintenance and consolidation of peace, and stability as well as the promotion of development, especially in Africa.

The issue of the Moroccan Sahara was discussed in light of UN Resolution 265, adopted on October 27, 2022. King Mohammed reaffirmed Morocco’s constant position for the settlement of the regional dispute on the basis of the autonomy initiative, within the framework of the sovereignty and territorial integrity of the Kingdom. He expressed support for the Secretary-General’s Special Representative, Mr. Stefan De Mistura, to conduct the political process, as well as the for MINURSO in observing the ceasefire.

Present at this meeting were a Special Advisor to the UN Secretary-General, Mr. Miguel Graca and Morocco’s Minister of Foreign Affairs, African Cooperation and, Moroccan Expatriates, Nasser Bourita.