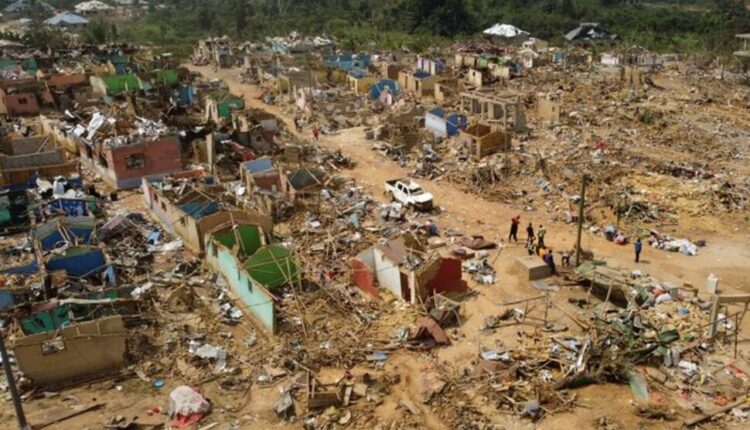 Preparatory works on the proposed site at Bogoso-Kojokrom for the resettlement of the displaced victims of the Appiatse explosion is about 90 per cent complete.

The victims are to be resettled at the new site, beginning tomorrow Wednesday, January 26.

“We will move them to the new place because where there are a lot of health concerns,” Dr Isaac Dasamani, Municipal Chief Executive (MCE) for Prestea Huni-Valley.

“The plan is that tomorrow we will start sending some of the relief items to the site and ensure that we prepare the site adequately for them.”

“There is water available, washrooms available and we have put a lot of security measures in place,” he told the Ghana News Agency.

The new temporary site is expected to accommodate about six hundred people. This is because some of the victims have moved to stay with their relatives in neighbouring communities.

The MCE was confident that the work done so far was enough to accommodate over six hundred people while working on the rebuilding project.

He explained that the mounted tents at the site would be shared according to households, adding that a family would receive either a bigger or smaller tent depending on the size.

A bigger tent, he said, could accommodate about 15 people while the smaller tents could only take six people.

The idea, the MCE said, was to provide the avenue for the people to do their cooking, adding items such as coal pot, charcoal and others would be provided.

He said a tent had been designated to serve as a clinic, where nurses would be stationed to see to the health needs of the people.

Additionally, he said an entertainment room fixed with Television sets would also be designated to provide entertainment for the people.

The MCE said the concentration was on how to provide the people with basic amenities to make their life comfortable and assured that the assembly would do everything to achieve that.

Dr Dasmani said the reconstruction of the Appiatse community would start in earnest as soon as all the necessary protocols, including further consultations with relevant state agencies, were completed.

Also, arrangements were being made to get the bodies of the deceased released to their relatives for burial.