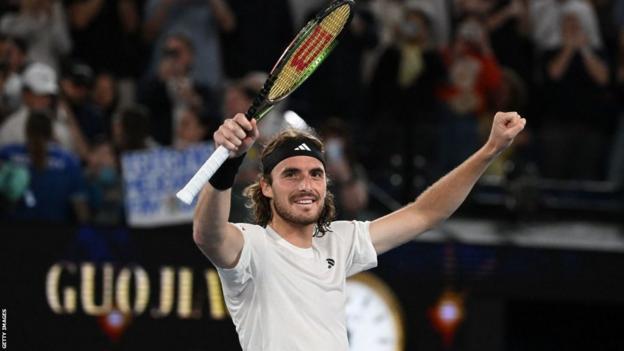 Lehecka, of the Czech Republic, had been one of the surprise packages of the tournament having beaten two top-12 seeds to make the quarter-finals.

The 21-year-old had previously never won a Grand Slam match.

Earlier on day nine, Russian Khachanov progressed to the final four of the Australia major for the first time when his quarter-final opponent Sebastian Korda was forced to retire with a wrist injury with the score at 7-6 (7-5) 6-3 3-0.

The other semi-final will be decided on Wednesday, when Ben Shelton and Tommy Paul contest an all-American quarter-final before nine-time champion Novak Djokovic faces Russian Andrey Rublev.

Battling wins over 11th seed Cameron Norrie and sixth seed Felix Auger-Aliassime had catapulted Lehecka into the spotlight over the past week, but the world number 71 looked nervy in the opening exchanges with Tsitsipas.

Tsitsipas, ranked fourth in the world, dominated the first set after breaking his opponent’s serve early on but was pushed hard by Lehecka throughout the second. Forced into a tie-break, Tsitsipas took control, racing into a 4-0 lead before comfortably seeing it out.

The 24-year-old faced further challenges in the third set when he saved three successive break points at 3-3, before making his move on Lehecka’s serve at 5-4 down to wrap up the win on his first match point.

“It was a fair dinkum kind of performance,” said Tsitsipas, who added he felt like the Australian Open was his home Grand Slam.

“It felt different this time than any other match, the most important thing is that I found a solution.

“It was a very difficult three-setter, one of the most difficult so far in the tournament.

“Jiri has had a very good tournament, I wish him the best for the future because he’s a great player.”

Tsitsipas has never lost to semi-final opponent Khachanov in five meetings, and should he go all the way at the Australian Open and win a first Grand Slam title, he would become world number one.

‘Not the way you want to finish’

In Tuesday’s earlier quarter-final, American Korda was growing into the match when he began to struggle with his right wrist, taking a medical timeout midway through the second set.

Visibly disappointed, he lost seven straight games on his return before retiring, walking over to shake Khachanov’s hand.

Korda, the son of 1998 champion Petr, then left the stadium to a standing ovation.

“Obviously it’s not the way you want to finish the match,” Khachanov said.

“Until a certain point it was very competitive. Sebastian beat one of my friends, Daniil [Medvedev] in three sets and [Hubert] Hurkacz in five. He’s playing great tennis.”

Olympic silver medallist Khachanov is only the 10th active male player to reach the last eight at all four majors and also reached the semi-finals of last year’s US Open.

He started strongly but failed to serve out the opener at 5-3 before taking his third set point of the eventual tie-break with a clinical backhand winner.

After a slow start Korda had grown more competitive but he faded badly after receiving treatment five games in to the second set.

The swift loss of the set followed – although Korda did create two break points as Khachanov briefly tightened up when serving for a 5-3 lead – but the decision was made for the American when he was only able to take a single point from the first three games of the third.

Korda said of the injury: “I had it a little bit in Adelaide a couple weeks ago but then it went away. During the matches, it was completely fine. Then, just one kind of mis-hit return and it started to bother me a lot after that.

“Some forehands, I couldn’t even hold the racquet. Volleying was almost impossible for me. So it was a little tough.”