The newly-enstooled Leshie Mantse in the La Dade-Kotopon Municipality, Nii Tettey Ofro Osro I, has said baby-naming ceremonies (Kpodziemo) are not an achievement and has, thus, advised teenage girls in the community to stop prioritising it over their education.

Instead, he said the girls in the La community must stay focused on their studies and stay away from early sex to avoid teenage pregnancies.

Speaking at a donation ceremony at the La Dade-Kotopon Municipal Education office in Accra on Thursday, 20 January 2021, Nii Tetteh Ofro Osro I, noted that parents have a role to play in ensuring the girl-child in La stays in school. 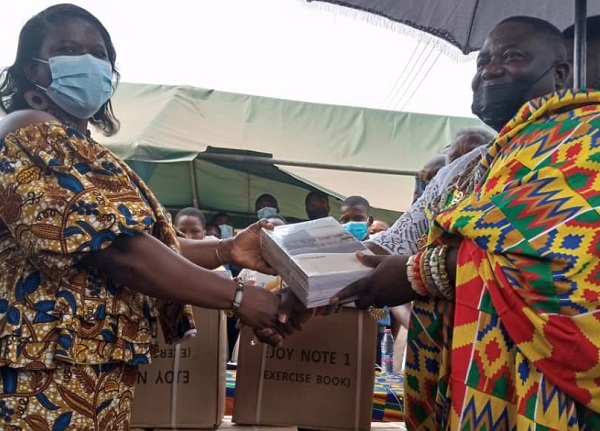 “Education will keep our girls from prioritising early child-bearing and ‘Kpodziemo’ over their studies, to attain greater heights in order to contribute their quota to the development of our community in future”, he said.

“My dear young girl, ‘Kpodziemo’, for a teenager, is not an achievement. Do not stop yourselves from becoming what you can become tomorrow,” the traditional leader advised.

“I, therefore, pledge my support to ensure the growth of education in our community. My doors are wide open to receive your concerns and suggestions on how best we can move education forward and keep our children, especially our girl-child in school.”

The donation forms part of the La-Leshie Mantse’s initiative to support the growth of education in the La Dadekotopon Municipality.

The La Dade-Kotopon Municipal Director of Education, Habiba Kotomah, who received the items on behalf of the Municipality, commended the chief for the gesture.

‘Kpodziemo’ is a naming ceremony by the GaDangme people during which an infant is officially outdoored as a member of a family.

It is held on the eighth day following the birth of a child.

In recent years, ‘Kpodziemo’ has become fashionable among teenage girls in Ga communities, contributing to a high rate of teenage pregnancies.