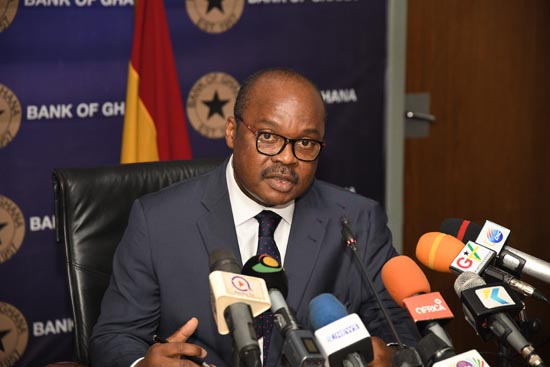 The Bank of Ghana (BoG) has refuted suggestions by the Minority in Parliament that it printed money to the tune of ¢22.04 billion to finance the government’s budget.

According to the apex bank, the amount in question represents net claims on the government, and not new currency printed to support the government’s budget.

The central bank further explained that the net claims of GH¢22.04 billion comprised the stocks and bonds sold by banks, the country’s allocation of special drawing rights (SDRs) by the International Monetary Fund (IMF), drawdown of government balances with the central bank and negative on the government’s account owing to auction failures.

The BoG was responding to allegations by the Ranking Member of the Finance Committee in Parliament, Cassiel Ato Forson.

Shortly after the presentation of the mid-year budget review in parliament on Monday, 25 July 2022, the Ajumako-Enyan-Esiam MP claimed that “between January and June 2022, the Minister responsible for Finance and the government went to the Central Bank, and they encouraged the BoG to print money worth GH¢22 billion. They have printed GH¢22 billion fresh money without the knowledge of Parliament and without informing all of us”.

In an address to the press, he said the information was hidden on page 97 of Appendix 2(a) of the mid-year budget under the section on Bank of Ghana.

He indicated that the printing of the currencies has contributed to the rise in inflation, which now stands at 29.8%.

“I am saddened, no wonder inflation is galloping, no wonder that our reserves position is dwindling. Because when you create new money out of the thin air, what happens is that inflation will go up and obviously because it is new money, you will end up losing your reserves because there would be new consumption,” he stressed.

The Ajumako-Enyan-Esiam MP urged the sector minister to return and deliver a new mid-year budget since the omission of the GH¢22 billion cedis is pervasive and scandalous.

He also urged the Governor of the Bank of Ghana not to repeat this “unlawful action” but rather seek parliamentary approval when the need for the printing of fresh notes arises.

“I want to urge the Governor of the central bank that he has engaged in gross illegality, and in future, if he is asked to print money, he should first come to Parliament before he acts.”

In response, the BoG noted that “in Appendix 2A of the Mid-Year Fiscal Policy Review document, under financing, out of the total financing of ¢28.12 billion, an amount of ¢22.04 billion was captured under BoG. This is the amount being referred to by the Ranking Member as BoG’s printing of currency to support the budget”.

Below is the full response from the BoG:

Bank of Ghana’s attention has been drawn to an interview granted by the Minority Ranking Member on the Finance Committee in Parliament, Hon. Cassiel Ato Forson alleging that Bank of Ghana (BOG) has printed an amount of GH¢22.04 billion to finance the government’s budget without parliamentary approval.

His reaction was in response to the 2022 Mid-Year Fiscal Policy Review, which was presented to Parliament by the Minister for Finance on Monday, July 25th 2022.

In Appendix 2A of the Mid-Year Fiscal Policy Review document, under Financing, out of the total financing of GH¢28.12 billion, an amount of GH¢22.04 billion was captured under BOG.

This is the amount being referred to by the Ranking Member as BOG’s printing of currency to support the budget.

Bank of Ghana deems it necessary to provide clarity on the issue and to set the records straight.

The amount of GH¢22.04 billion represents net claims on Government, and not new currency printed to support the Government’s budget.

The net claims of GH¢22.04 billion have the following four components:

1. GoG Stocks and bonds sold by commercial banks to Bank of Ghana under repurchase agreements, by which banks routinely manage their liquidity positions;

2. IMF SDR allocation disbursed to Government through the Bank of Ghana;

3. Draw-down of government’s own deposits held with the Bank of Ghana;

4. Negative balance on Government’s account with Bank of Ghana at a point in time, and self liquidated as new Government deposits are credited to the account.

Having purchased these bonds on the secondary market as a secondary transaction, the Bank of Ghana’s holdings of GoG bonds increased by GH¢1.6 billion, not because it had lent money to government, but because it had purchased a GoG bond originally purchased by the bank for investment purposes.

As part of its function of providing liquidity to the banking sector, the Bank of Ghana routinely enters into similar agreements (Repos and Reverse Repos) with commercial banks that hold Government bonds and require liquidity to meet short-term obligations.

These arrangements do not represent lending to the government by the Bank of Ghana.

The proceeds of bonds purchased from banks, go to those banks and not to Government.

Once Bank of Ghana purchases such bonds from banks, it holds them until maturity of the bonds, unless they are repurchased by the banks.

Second, GH¢6.2 billion of the amount reflects on-lending of IMF SDR resources to Government, in line with the overall objective of the special SDR operation by the IMF.

IMF resources are usually meant for Balance of Payments support, and it goes directly to the central banks.

However, in this particular instance, the special SDR allocation by the IMF was designed to provide budget support to countries to help address issues related to the Covid19 pandemic. Last year, Bank of Ghana received additional SDR allocation of SDR 707.3 million (US$1.001 billion).

In line with the broader objectives of the special SDR allocations, the Bank of Ghana on-lent the additional resources to the Government.

This was approved by Parliament in the 2022 Budget presentation.

The amount of SDRs so far extended to the budget amounts to GHC6.2 billion.

In addition, an amount of GH¢2.85 billion reflects a drawdown on Government’s own deposits held with the Bank of Ghana.

These include statutory funds such as the GET FUND, National Health insurance, District Assembly Common Fund and the Sinking Fund.

Also included are donor-related funds as well as the Ministries, Departments and Agencies (MDAs) operational accounts with Bank of Ghana.

The residual amount of GH¢11.4 billion included in the GH¢22.04 billion, represents an overdrawn balance on the Government’s treasury main account held with Bank of Ghana as of the reporting date.

Overdrafts of this nature occur from time to time, as the auction system has been designed to ensure same day settlement of maturities and interest payments, once
the auction is concluded.

This guarantee of same-day settlement of maturities and interest payments, which has always been part of the auction system, has underpinned the
development of the local currency bond market. With such a guarantee, on occasions when there have been uncovered auctions, maturities are automatically settled and then a reconciliation is done with Government. Incoming Government cash deposits are then used automatically to liquidate such overdrawn balances on a rolling and continuous basis.

The current gap of GHC11.4 billion reflects the net amount of the gap at the end of June 2022.

This balance is cleared regularly. Any outstanding balance has to be cleared by the end of the year.

Bank of Ghana would like to assure the public that in carrying out its functions as banker to Government, it is committed to complying fully with all relevant legal requirements.

Bank of Ghana’s operations are constantly guided by the requirements of the Bank of Ghana Act, 2002 (Act 612) as amended. As indicated in the Minister’s speech, should the need arise for emergency financing by Bank of Ghana in line with the BoG Act, Bank of Ghana, as was done in the case of the Covid-19 Bond of 2020, will follow the processes prescribed by the Act.