Commercial banks in the country are channeling much of their assets into investment in government bills and bonds as the state’s appetite for domestic borrowing continues to increase, thereby making less funds available for the private sector – which is going through pandemic-induced challenges – to borrow.

Data published by the Bank of Ghana show that government Treasury bills and bonds form nearly half of banks’ asset portfolio at the end of 2021. According to the Monetary Policy report (January 2022), the share of bills, securities and equity in total assets of banks increased to 46.2 percent from 43.1 percent on account of the 29 percent (year-on-year) growth in these investments in December 2021, relative to the sluggish growth in credits.

Compared to growth in credits, gross loans and advances recorded a year-on-year increase of 12.6 percent to GH¢53.8billion as at end-December 2021. Also, net loans and advances (gross loans adjusted for provisions and interest in suspense) also recorded a growth of 12.8 percent to GH¢47.1billion. And new advances extended by the banking sector to the economy in 2021 was GH¢36.4billion, registering a growth of 6.8 percent.

So even though both investments in government bills and loan advancements are increasing, the rate of increase in the former is almost three times higher than the latter. And when compared to new advances, the rate of growth is four times higher – indicating banks are taking advantage of government’s insatiable appetite for borrowing from the domestic economy. 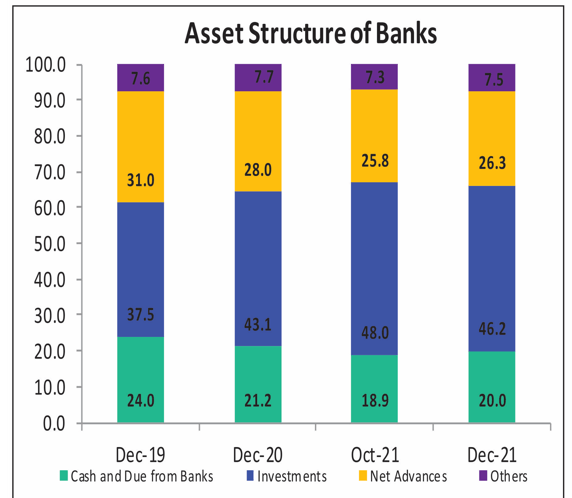 Commenting on this an interview with the B&FT, banking consultant Dr. Richmond Atuahene said there is no way banks will divert more of their assets to loans for the private sector once there is competition from government offering attractive interest rates; and more so when lending to government comes with no strings attached compared with lending to the private, which can lead to default at any time; especially in this pandemic era.

The data support the banking consultant’s comments, as the private sector’s non-performing loans (NPL) ratio inched up from 14.8 percent in 2020 to 15.2 percent in 2021 on the back of impairment of some facilities. The report admits the banking sector’s exposure to credit risk was slightly elevated due to the lingering adverse impact of COVID-19 on borrowers’ capacity to repay their loans.

The report further shows that total assets of the banking industry increased by 20.4 percent (year-on-year) to GH¢179.8billion as at December 2021 – higher than the 15.8 percent growth recorded in the same period of 2020 due to strong growth in investment.