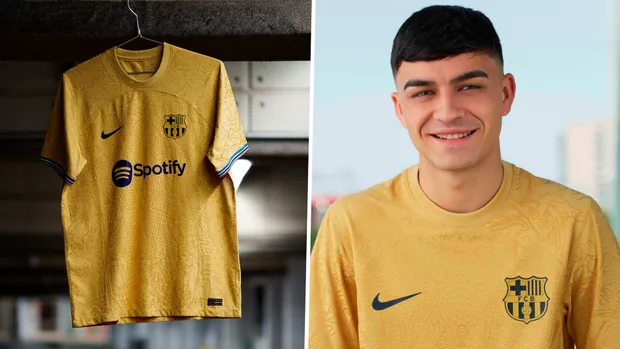 Barcelona have released their new away kit for 2022-23, with using Olympic gold as inspiration in the latest design from suppliers Nike.

The pattern of the jersey also incorporates a map of the city, with nudges towards the venues used at the 1992 Games that were held in Catalunya, while trim at the end of the sleeves features the colours of the five Olympic rings.

Barca had already looked to the Olympics when delivering their home kit for the upcoming campaign, marking the 30th anniversary of one of the city’s most memorable summers.

The Blaugrana have delivered their away strip under the tagline “The Flame Lives On”, with one of the most iconic clubs on the planet saying the design evokes “the way that the Olympic spirit that drove the city of Barcelona into a new era is still burning and a part of the everyday lives of men and women”.

Barcelona have made their 2022-23 away kit available for advance sale from June 27 to July 2 through Barca Stores and the club’s e-commerce channels.

As is the case with Barcelona’s home kit for 2022-23, the shirts and shorts that the players will be wearing on the pitch and the replicas worn by fans are made of 100% recycled polyester fabric, produced from recycled plastic bottles.

Supporters can also get involved with a version of the shirt that will be identical in quality to that worn by Xavi’s squad when they take to the field in La Liga and Champions League action.

Younger followers of the Blaugrana can show their support by acquiring the latest jersey that will be worn by their sporting heroes.