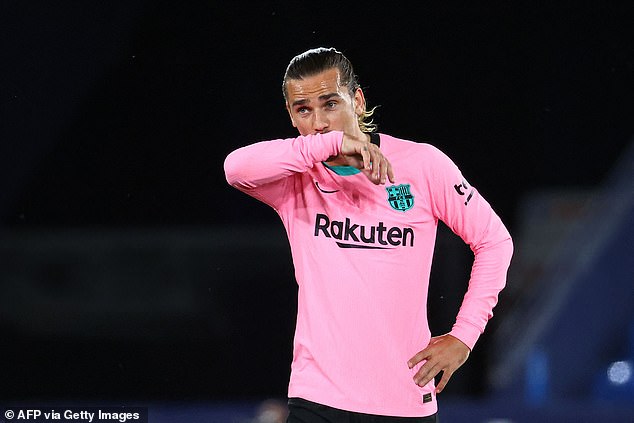 Barcelona have accepted that they will have to sell Antoine Griezmann if they manage to get Lionel Messi to sign a new contract.

The Spanish side are facing the need to trim a whopping £170m from their annual wage budget this summer before they can re-sign Messi and register new signings Memphis Depay, Sergio Aguero, Eric Garcia and Emerson.

While smaller departures like those of Jean-Clair Todibo, Junior Firpo and Francisco Trincao have made a minor dent, there’s an acceptance that Barcelona need to do so much more if they are to get back under their salary cap, and that’s where Griezmann comes in.

As one of the highest earners in the squad, Griezmann has been touted as a possible casualty of the wage trim, and AS believe that there is very little chance of both he and Messi being at Camp Nou when next season starts.

Griezmann’s salary is far too high for a team with major financial issues, especially since there may not even be a spot in the team for him anymore. Messi, Aguero, Depay and Ansu Fati look likely to dominate most of the minutes, and there’s no way Barcelona are going to pay Griezmann to sit on the bench.

Barcelona are begrudgingly prepared to ask Griezmann to leave the club if Messi sticks around, but a major problem with this is finding a team willing to pay up for the Frenchman in a post-COVID transfer market.

Manchester City have been named as potential suitors if they miss out on Harry Kane, but the sources of that gossip mean it has to be taken with a pinch of salt. Mundo Deportivo mention mystery reports in the English media, all of which link back to Spanish outlet Fichajes, so I wouldn’t get your hopes up about this one if I were you.

Pep Guardiola has previously suggested City would not be spending big on a new striker this summer anyway, but that came before they bid £100m for Harry Kane and voiced their interest in Erling Haaland, so it’s hard to tell what their plans are these days.

Speaking to TV3 recently, Guardiola hinted that spending that kind of money may no longer be out of the question.

“I imagine that if we want to sign a Barca or Real Madrid player for £100m or so, Barca and Madrid will not complain,” he said. “They will be delighted that it can be done.

“I don’t know how the market will end. I don’t know, with Txiki [Begiristain], what we can do because many times you want to do things that are not possible. What we can do, we will do and if we do not continue with the squad we have, with which we have won three leagues in four years and finally reached a Champions League final.”