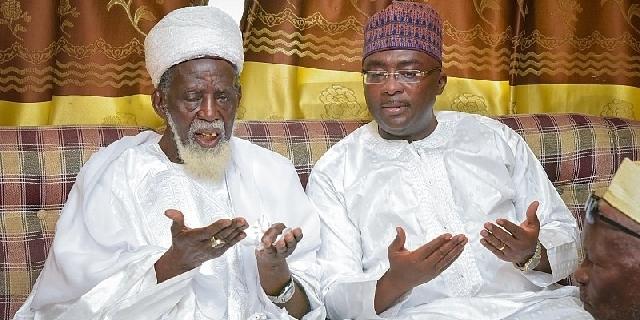 The revered scholar celebrated his 103rd birthday on Saturday, 23 April 2022.

In his birthday message to the cleric famously known for his peaceful approach, Dr Bawumia said: Mallam, as he is affectionately referred to, is an epitome of Allah’s amazing grace, and we thank Allah for the life of this great man, who continues to inspire millions”.

Dr Bawumia highlighted the personality of Sheikh Sharubutu that has made him “a driving force for religious harmony and peace in Ghana”.

“May the Almighty Allah continue to grant him good health and long life,” Dr Bawumia added in a Facebook post.

He was born to Nuhu Sharubutu and Hajja Ayishatu Abbass at Accra cow-lane in April 1919.

Osman started his education at home with his father during the day and with his mother at night.

Osman was sent to a new learning environment in Kumasi by his father after seeing his devotion to books and knowledge.  He was taught by Abdullah Dan Tano and went through Arabic Grammar, Arabic Literature and Texts, Islamic Jurisprudence and Hadiths.

After his studies in Kumasi, he devoted his time to teaching the Muslim youth who wanted to become Islamic thinkers and scholars. Osman continued the pursuit of knowledge even as a teacher himself.

In 1974, Osman was appointed the Deputy Regional Chief Imam of Ghana after discussions were held among Islamic personalities.

His appointment was made in consideration of his dedication to teaching Islam. He turned down the offer made to him, but some Muslim chiefs forced him to give it a thought.

In 1993, he was appointed the National Chief Imam of Ghana for the Muslim Communities in Ghana.

In November 2020, an ultra-modern sports complex built in his community, New Fadama, was named after him.

In the past, former President Kufour said Osman deserved a Nobel Peace Prize for his contribution to the development of Ghana.

In December, he presented an award for being the ‘Best Zongo Minister and Muslim Politician for the year 2019/2020 to Mustapha Hamid, who was the Minister for Inner Cities and Zongo Development.

Since 2015, a football tournament for Zongo communities named the Ramadan Cup, also the Sheikh Sharubutu Ramadan Cup, is organised in honour of him.

It serves as a way of promoting peace and unity within the Zongo communities in Ghana, as its tagline reads ‘Bringing the Zongo Community Together’.