Prof Naana Jane Opoku-Agyemang, Vice Presidential Candidate of the National Democratic Congress (NDC) has urged the electorate to be vigilant against vain campaign promises by politicians.

“Do not let anyone deceive you with sweet promises,” she said.

Addressing hundreds of residents of the mining town of Prestea in the Western Region on Tuesday, the Running Mate asked the electorate to check the track record of the parties on fulfilled promise.

According to her, the NDC would continue to be sincere with Ghanaians, adding that the party’s manifesto represents what the people want.

“We are not like others who fail in delivering on promises that only sound sweet. You know that when we promise, we deliver,” she said, amidst loud cheers from the crowd.

Calling for the mandate of the people to enable the NDC to return to power to rejuvenate national development, the Running Mate noted that the NDC remains the most credible party to lead the country into sustainable progress. 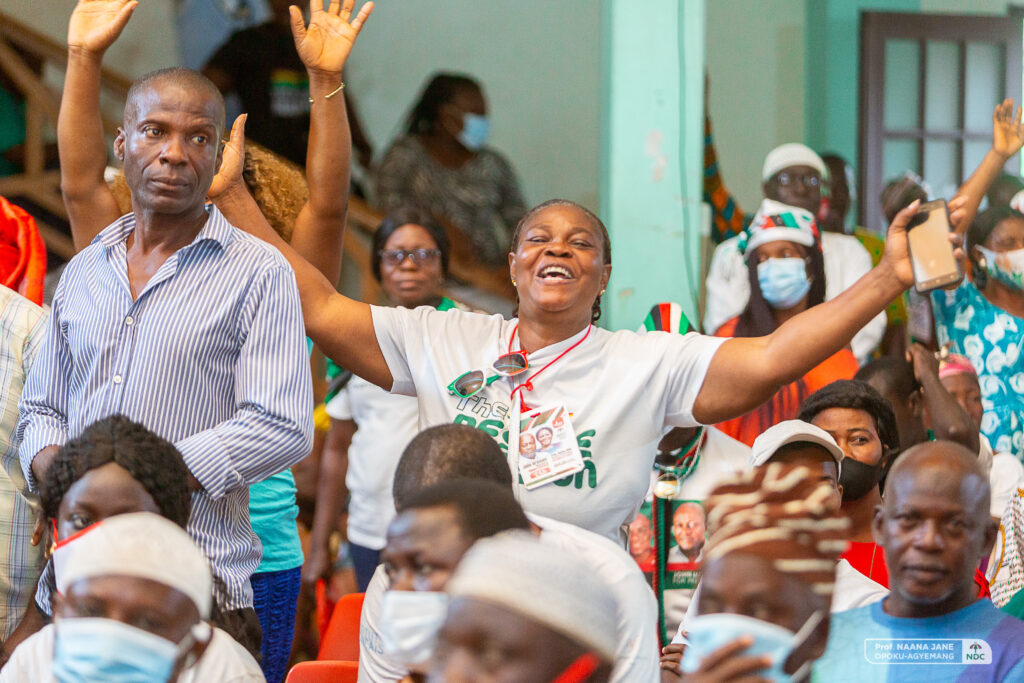 Prof Opoku-Agyemang earlier called on the chief of Prestea Hemang, Nana Nteboa Pra IV, where she explained the various sections of the party’s manifesto relating to socio-economic activities in the area, including small scale mining.

In the quest to equip the youth with the requisite technical skills in mining, she said the NDC government would prioritise technical education in mining areas to support the youth.

In addition, she said the NDC government would facilitate the establishment of gold refineries in mining areas to ensure that small scale miners benefit more from their mining activities.

“You have been cheated for too long because you don’t have refineries here to trade your minerals in a more profitable manner,” she said.

Nana Nteboa Pra IV, Chief of Prestea-Hemang, described the 10billion dollar “Big Push” infrastructure development plan by the National Democratic Congress (NDC) as a great agenda for the progress of the country.
“It is a good thing which will greatly help the country,” he said.
Nana Pra, who said this while welcoming Professor Naana Jane Opoku-Agyemang, NDC Running Mate to the area on Tuesday for her campaign tour, said they have analysed the party’s manifesto and found that the Big Push is a well-thought-out plan that would significantly help the country when implemented.

He was also delighted that some of their infrastructure, economic and welfare needs have been covered in the party’s manifesto, and commended the NDC for a comprehensive development plan.
“You have thought about us, and so we shall also remember you on voting day,” he said.

The chief also cited the party’s plan to regulate the Okada transportation and the provision of free technical and vocational education and expressed optimism of beneficial outcomes for Ghanaians.

In addition to the NDC’s plans for the area, the chief urged the party to consider facilitating the establishment of a nursing training school and a satellite campus by the University of Mines and Technology in the area to enhance the health and technical training respectively for the youth.
He also wants a new hospital for the area, as their current50-bed capacity hospital, which was built in 1929, is in a state of disrepair and could no longer serve the adequately serve the town with a population of over 70,000.

Prof. Opoku-Agyemang, who arrived in the town a rousing welcome, thanked the chiefs for their support and encouragement, saying “the NDC shall not disappoint you.”

The running mate noted that the NDC remains conscious of the actual needs for Ghanaians and would continue to offer quality leadership for all-inclusive development when it returns to power.