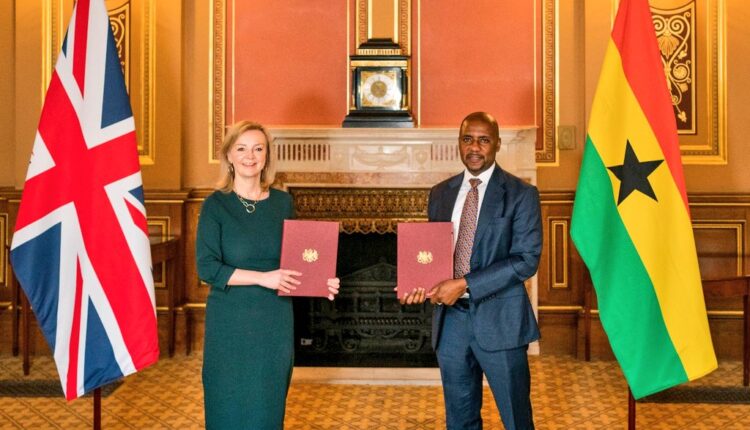 Between Ghana and The Great Britain Who Needs Economic Bailout?

The decision of Ghana’ s president, H.E Nana Akufo-Addo to go for a bailout from the International Monetary Fund (IMF) as a result of rising inflation and its associated effects on the national economy, has raised the eyebrows of many Ghanaians.

They wonder why the government made a U-turn in the full glare of the very audience it swore heaven and earth, not go to IMF for financial assistance.

The government has maintained that the current economic economic challenges facing the country are due to the Covid 19 pandemic and the implications of the Russia-Ukraine war. In the view of some Ghanaians, the high standard of living in the country is the consequence of internal policies being pursued by the government as the Free Senior High School Policy and the One District One Factory policy which considerably exert on the national purse.

The  self imposed responsibility to build a National Cathedral has aggravated the issues. Many people consider the cathedral as a luxury project that symbolize a misdirection of critically needed funds to ameliorate the plight of the ordinary man. The government has been categorical that the cathedral would take no state money but draw on unofficial sources such as fundraising.  Whilst public activists point at  the high unemployment  rate in the country requiring investments in economic ventures, the government says it already at it with several far-reaching initiatives, some of which are criticized without recourse to their objectives.

Report has indicated that Ghana’s annual inflation rate accelerated for the 14th straight month to 31.7% in July of 2022, from 29.8% in June, breaching the upper ceiling of the central bank’s target band of 6% to 10% for eleven months. It was the highest reading since December of 2003, surpassing market forecasts of 30.8%.

Prices quickened further for both food (32.3% vs 30.7% in June) and non-food products (31.3% vs 29.1%), on the back of a weakening cedi, with prices of imported goods outpacing domestic ones for the fourth month. On a monthly basis, consumer prices advanced by 3.1%, up slightly from a 3% rise in the previous month.

Recently, the Public Utilities Regulatory Commission (PURC) increased electricity and water tariffs in Ghana by 27.15% and 21.55% respectively. Although utilities cost burden on consumers continue to increase and private sector players have also transferred operational costs to consumers by increasing prices,  public sector salaries have seen only little or no increase at all. As the downturn reverberates, some private managers are unable to pay their workers as a result of low sales and  wholesalers run at a loss, in terms of low patronage and their wares ticking closer to expiration .

The economy of Great Britain bear some similarities with that of Ghana in post covid crisis. Recently, CNN reported that rail workers, journalists, lawyers, and postal workers have gone on strike demanding higher pay as inflation soars to its highest level in decades.

The report indicates that at least 155,000 workers are currently on strike. These include staff at the postal service workers, engineers and call center workers for telecom provider (BTGOF).

More strikes could be on the way this fall, threatening unprecedented disruption across a range of industries. Teachers, doctors and nurses are set to vote on strike action in the coming weeks. Unions could even coordinate their walkouts. Unite and Unison — the country’s biggest unions with 2.7 million members in total — are calling for others to join them in synchronized action.

It is one of the most significant waves of industrial unrest the United Kingdom has seen since the “winter of discontent” in the late 1970s when rampant inflation pushed workers to stage mass walkouts. About 7.9 million working days were lost between November 1978 and February 1979, according to the Office for National Statistics. This clearly shows that 2022 is not the only bad year for the citizen of Great Britain.

Soaring prices and years of stagnant wages are the backdrop to this year’s disputes in the lives of the people of Great Britain. In July, 2022, the consumer price inflation hit a 40-year high of 10.1%. Forecasters at Citigroup have presumed that inflation could shoot past 18% at the start of next year, and Goldman Sachs thinks it could even hit 22% if gas prices don’t fall soon

Workers are already feeling the strain. Average real wages, which account for inflation, fell by 3% between April and June, compared with the same period last year. That was the biggest hit to spending power in more than 20 years. Real wages barely increased in the decade to 2020.

The story of Ghana which is a developing country and that of Great Britain which is a developed country draws on the notion that going to IMF is not the juicy way out in rescuing a country from economic straits.

Both countries may have to ensure that they invest more in the agricultural sector and economic projects to create avenues for the youth to earn a living. ”In the case of Ghana, any salary increment of public sector workers ought to take retrospective effect”, opined workers who spoke with Ghana Report.